Seek Thermal’s new Reveal Pro thermal imaging camera is an extremely impressive pocket-sized camera with image quality comparable to the FLIR E6. It’s not the first pocket-sized thermal camera, but it might be the best one available today. I don’t think I’m ever going to leave my house without an infrared camera anymore, now that I have this thing. With a $699 price tag, this camera clearly falls outside the price range of “accessory” or “toy”, but it has the performance to justify the price. 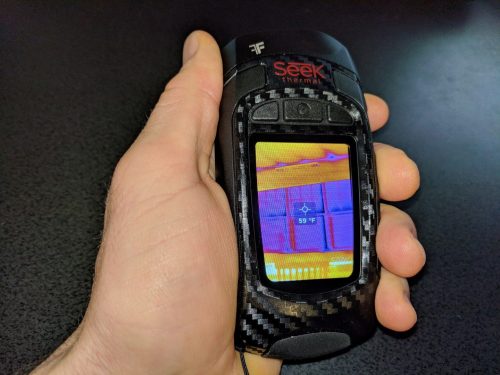 The Reveal Pro is small, much smaller than I thought it would be, and that’s a good thing. It’s that much easier to slip it into a shirt pocket if that’s your thing. I might have to start buying shirts with pockets. But seriously, it’s small. It’s also shaped a bit differently than most other infrared cameras, with the infrared lens at a 90-degree angle to the screen. This is more ergonomic for your hands, but maybe not so much for your neck. I think that I prefer the style of camera with the lens opposite the screen, probably because that’s what I’m used to.

The buttons are obnoxious. There are three of them at the top of the screen, and they’re very difficult to push. The video clip below illustrates what I’m talking about; the first four times that I apply a reasonable amount of pressure to the button, nothing happens. Once I push hard on the button, the camera responds.

The Reveal Pro also has a respectable 300-lumen light built in, which is quite impressive for an add-on feature. There’s a separate button on the side for the flashlight, and the camera doesn’t need to be turned on to use it. Again, this is a great feature. I really wish that my main thermal camera, the FLIR E6, had this feature. I compare other thermal cameras to the E6 because it’s my camera of choice. 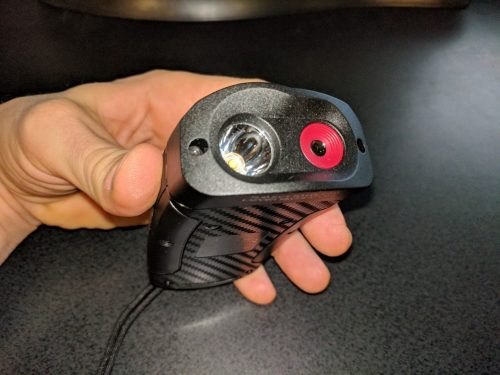 The menu options are pretty basic, and that’s alright with me. For home inspections, this is about all that I need. 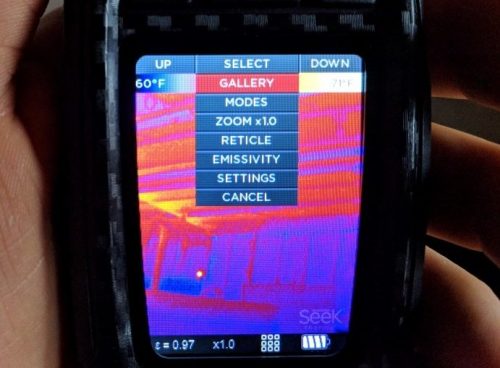 The battery life is great. According to the technical data sheet, you’ll get up to four hours of use on a single charge. I’d be content with just an hour or two.

This camera has an impressive resolution of 320×240, which is four times the resolution of my FLIR E6 (160×120). I’m thinking it should probably be called 240×320 because the screen is taller than it is wide, but whatever. You get it. For comparison, FLIR’s pocket-sized C3 thermal camera has a resolution of only 80×60, giving the Reveal Pro a huge advantage in the image quality department.

I walked around with the Reveal Pro and an E6 camera to take a bunch of comparison images. For this first set of images, I have the MSX feature on the E6 turned off. The MSX feature adds visible detail to a thermal image without actually giving any more thermal information, so it’s always an unfair comparison to have it turned on. See MSX on vs. MSX off.

The FLIR E6 is shown on the left, the Reveal Pro on the right. 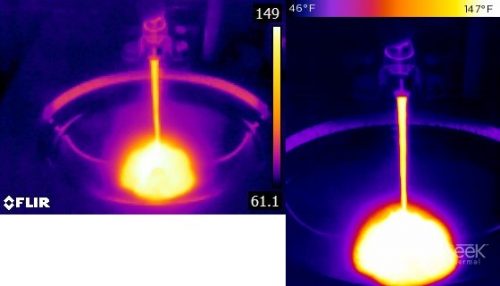 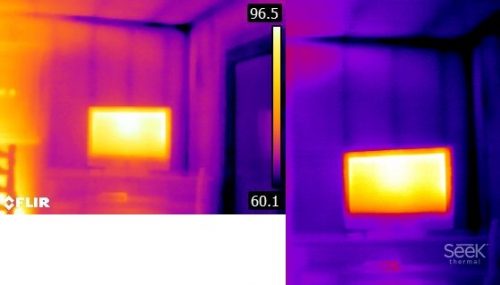 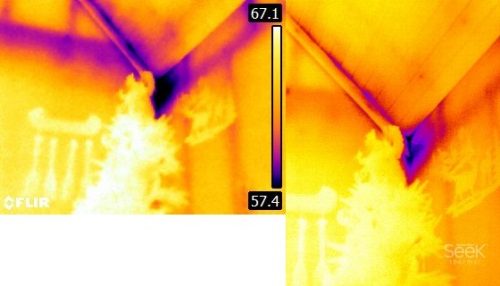 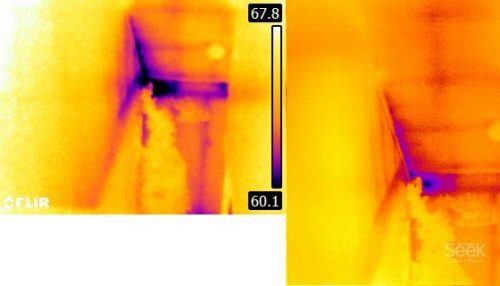 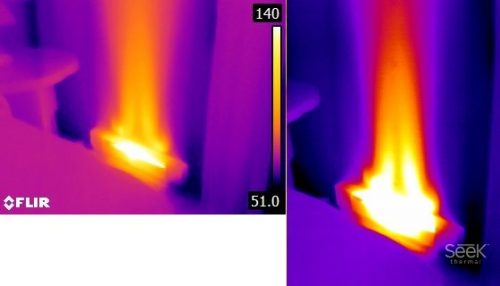 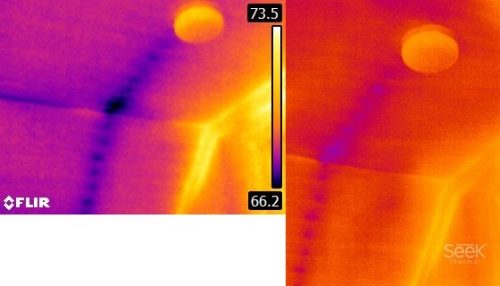 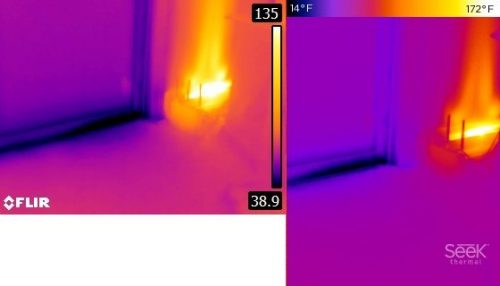 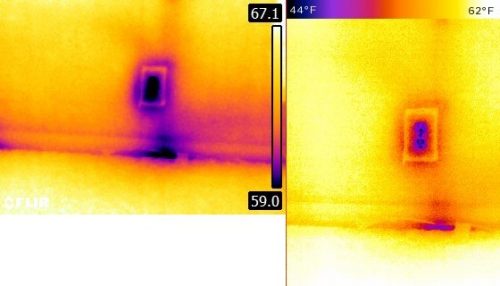 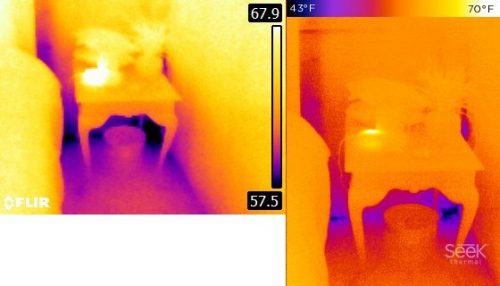 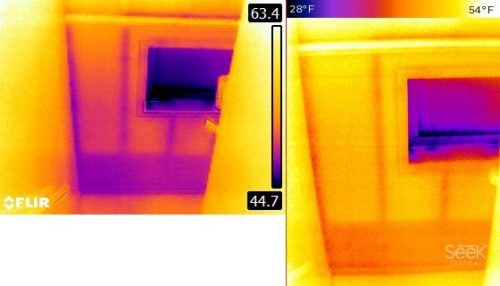 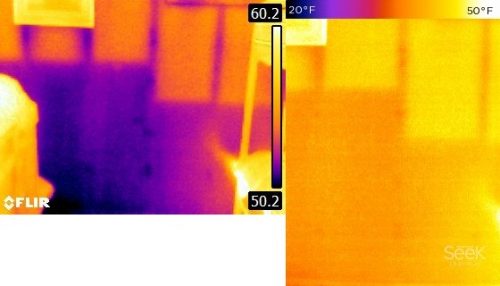 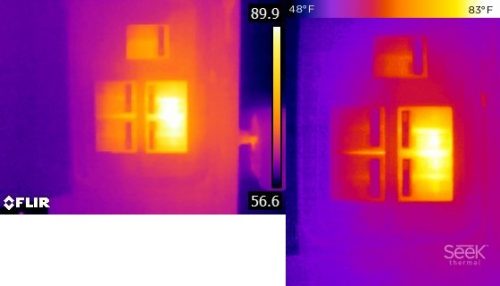 The field of view is much narrower on the Reveal Pro, but the quality of the thermal images is very good. Of course, I had to include a few images with the MSX feature enabled on the E6. 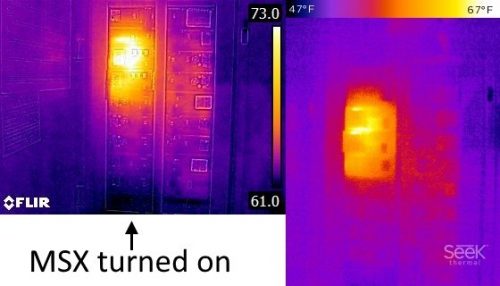 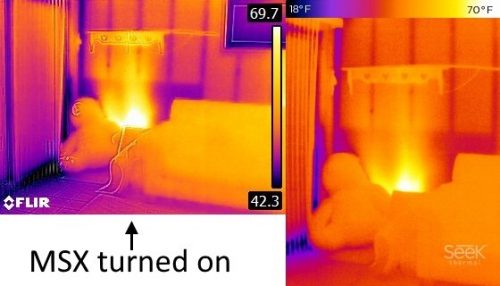 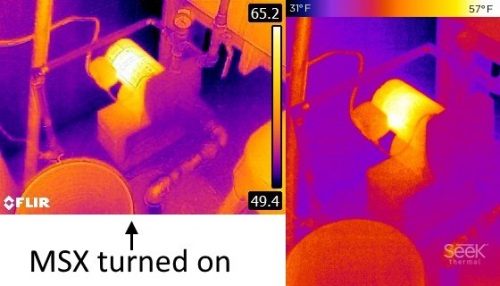 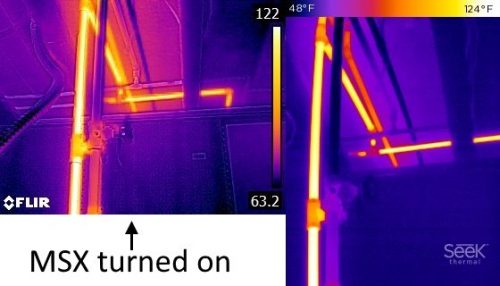 The MSX feature is hard to compete with, isn’t it? Nevertheless, I was very impressed with the image quality of the Reveal Pro.

Conclusion on the Reveal Pro