The E6 has a handle and a trigger, making for easy one-handed operation that feels natural.  While it’s not small enough to slip into a shirt pocket, that’s no concern of mine. When I inspect houses, I wear a tool belt. I don’t expect my tools to fit into shirt pockets. If an infrared camera were shaped like a traditional camera with some nice curves to wrap my fingers around, I’d go for that style, but there is currently nothing like that available today. 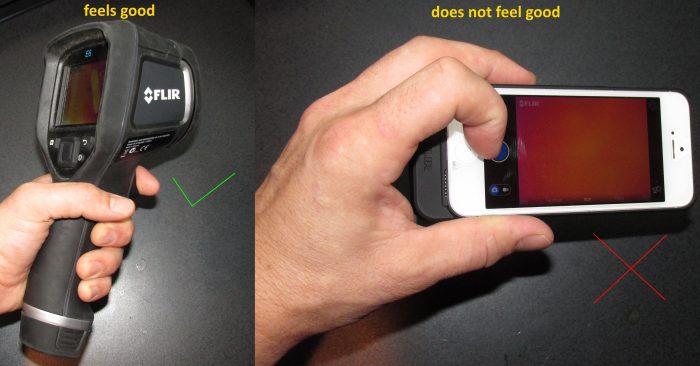 The E6 has a 45º x 34º field of view, which is great for being able to scan large areas at one time.  The images below show comparisons between the E6 and FLIR i7.

The E6 comes with a built-in optical camera that gives it the ability to take optical images at the same time that IR images are taken, with the angle and perspectives always being identical. I absolutely love this feature. Before this camera, I’d always hold my regular camera right up next to my IR camera while taking pictures because I wanted the angles to be exactly the same. With the E6, I don’t need to mess with that anymore.

This feature blends all of the high-contrast lines from images taken with the actual camera into the IR image, making everything seem to really ‘pop’. While this doesn’t make the infrared camera any more accurate, it does make it much easier to understand what you’re looking at, which has enormous value. I don’t think I’d ever go back to a camera that doesn’t have this feature. The image below shows a comparison of the same image with and without MSX turned on. I don’t think I need to say which is which.

The resolution of an infrared camera is definitely not the end-all be-all, as I discovered while testing the Seek Thermal infrared camera. The Seek camera has a higher resolution than the E6, but the images produced by that camera were inferior to those created by the FLIR E6.

The RESNET standard for infrared cameras says that the minimum allowable resolution is 120×120. That standard doesn’t apply to home inspections, but just in case I ever wanted to venture into the energy audit side of business, I decided to use 120×120 as a minimum standard for all of my infrared cameras, and the E6 meets it.

This camera is designed to survive falls from over six feet (they say 2m) and keep working. I’ve dropped mine a number of times with no ill effects. I’ve had the same E6 camera for just over three years now and it still works. This is definitely one tough camera. After about two years my battery quit holding a charge, so I called FLIR and they sent me a new one for no charge. I couldn’t ask for much more.

There are other more expensive cameras available, many of which have higher resolution, wifi connectivity, and the ability to record videos, but I haven’t had a need for any of those things. The one other camera in this same line of cameras with a higher resolution is the E8, boasting a resolution of 320×240. I tried an E8 alongside my E6 for about a week, and concluded that there wasn’t enough of a difference between the two cameras to justify a higher price tag of $3,995. The images below show side-by-side images taken with an E6 and an E8. To help make my point, I won’t say which is which.

You may notice that the temperatures aren’t the same between the two cameras in the images above, and that’s because the sensor is off on my older E6. The good news is that this doesn’t have much effect because I don’t use my camera to take measurements. I use it to find thermal anomalies that might indicate a problem.

For someone in the market for an infrared camera, especially a home inspector, I believe the E6 is usually the best choice.

One response to “FLIR E6: the best infrared camera for home inspectors”