Seek Thermal has a relatively new pocket-sized infrared camera called the ShotPRO, which retails for $699. 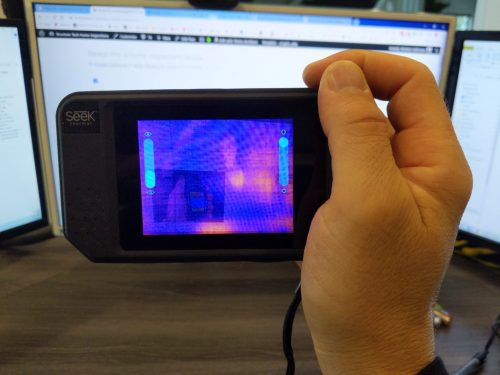 This camera offers a new feature from Seek, which they call SeekFusion. This gives the ability to blend infrared with real images, which promises to give images a better context. My preferred infrared camera for home inspections is the FLIR E6, so I compared the ShotPRO to that one several times in this post. I also did a video review.

The ShotPRO is shaped like a mobile phone, much like FLIR’s C2 and C3 cameras. It’s a bit chunkier than a mobile phone, but it has the familiar feel of a lens in the front and a screen on the other side, and it has a touchscreen as well. There are only two buttons on the device; a power button and the image capture button. This is perfect. It’s even thicker on the side of the capture button to give you a better grip on the camera. 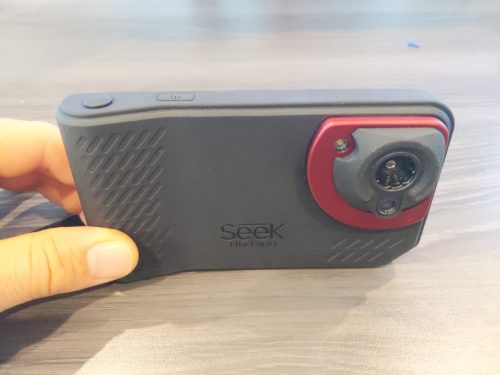 The outside of the camera is covered in what feels like hard rubber, making it very ‘grippy’ and making it feel durable.

The menu options are limited and basic, and that’s fine with me. I don’t need a huge list of menu options to use it for a home inspection. The menu options were also very intuitive; I quickly figured out how to blend images and adjust them so they looked right. No user manual needed for this camera.

This camera has a USB-C charging port, which I love. Everything ought to be USB-C. Images are stored in JPG format, and they’re all 512 KB, 640×480. It has an internal memory of approximately 3.5 GB, which means you have room for over 6,500 images. That’s great, provided you only take images.

This camera comes with a built-in LED light, which turns on and off with a touch of the power button. I love that. This is great design. 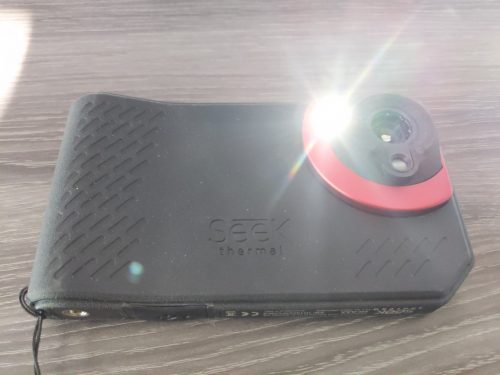 On the not-so-bright side, the light is comparable to what you’ll find on a mobile phone, making it useless for home inspection work. We need more light.

What really attracted me to this camera was the image blending option. My hope was that this would be a more affordable alternative to competitor FLIR’s MSX technology, so I was excited to test this camera out. You simply move a slider on the side of the screen, and it adjusts how much infrared vs visible image is displayed. The animation below, which I boosted from Seek’s website, shows how this works:

Unfortunately, the slider is very difficult to operate. Occasionally, it will respond to my finger, but most of the time it doesn’t. I have to touch the slider over and over again to get it to respond. I took a video to demonstrate how the slider worked, but it took me over 30 seconds to get the slider to respond in this clip. When I finally got it to work, I wasn’t doing anything differently.

Let me reiterate, I took this video to demonstrate the functionality of the slider. Not to show how poorly it functions. That part was an accident. I only boosted the animation from Seek because I couldn’t get the slider to work properly.

The image blending is nice to help give images context, but it’s not nearly as nice as FLIR’s MSX, which basically draws white lines on the edges of everything in your infrared image, giving it a superior image.

Resolution, sensitivity, and field of view

I went around my house and took a bunch of images with the Seek ShotPRO and the FLIR E6. I turned on the image blending feature for the ShotPRO, and set it to what felt like about 80% infrared. Just enough real image to give stuff context. Click on any of these images for a larger version. For commentary on the images, check on my video above.

Just for fun, I turned off the image blending and MSX on both cameras for this last image. All that you’re seeing is infrared. You can barely see the wall studs with the ShotPRO, but they’re pretty obvious with the E6.

The image quality of the ShotPRO rivaled that of the E6 in some situations, but it couldn’t hold a candle to the E6 in other cases.

The ShotPRO is a decent camera. It feels rugged and it’ll get the job done, and I would choose this camera over Seek’s Reveal Pro camera any day. When compared to the E6, however, it just doesn’t measure up. The images are generally darker and more difficult to understand. Not only that, but while the resolution is four times that of the E6, the images don’t look any better. Also, the poor responsiveness of the image slider would eventually make me chuck this camera out of a window.

This camera delivers good value for $699, but it’s going to remain in my tool bag as a backup to my E6.

ps: hey infrared camera manufactures, would you like to make a camera that completely dominates the market? Put the E6 into the shape of the ShotPRO/C2/C3, add a good light, and fix the E6’s memory problems. Maybe even a good flash? Go ahead and charge $2,000, because we’ll pay it. You’re welcome.