I’ve been seeing ice dams all over the Twin Cities, and I’ve heard from a number of homeowners who are having problems with ice dams right now.  I’ve written about ice dams extensively on this blog, so I’m putting together links to my three main blog posts on ice dams in one place.  The topics are how to prevent ice dams the right way, how to prevent ice dams from the outside if you can’t prevent them the right way, and how to get rid of ice dams.  I also have few more ice dam observations; file these under “advanced ice dam prevention”.

How To Prevent Ice Dams (the right way)

Ice dams form when snow is melted on the roof, then freezes again at the eaves.  The main reason the snow melts is because heat is getting to the roof decking from the house.  Stop the heat transfer, and you’ll probably stop the ice dams.  The main way to stop the heat transfer is to have air sealing performed in the attic.  The next step is to have insufficient insulation addressed.  Finally, if venting is improper, consider fixing it… but venting only plays a small role.  Ice dams are mostly about air leaks and insufficient insulation.  Click this link for more information about preventing ice dams the right way. 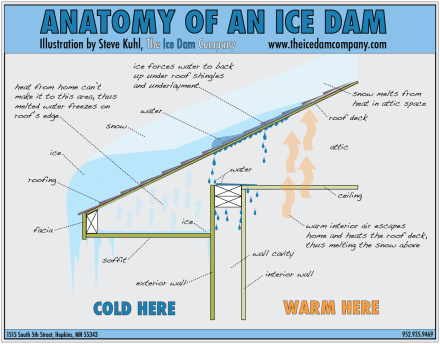 How To Prevent Ice Dams from the Exterior 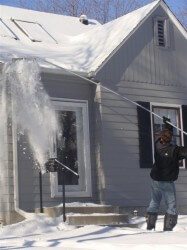 If you live in a 1-1/2 story home in Minnesota, you probably get ice dams.  There’s not much that can be done to prevent ice dams the right way at this style of house, short of gutting the upper level and framing down, or tearing the roof off and framing up.   Homes with vaulted ceilings and other inaccessible attic spaces can also be a real challenge.  In these cases, ice dams may need to be controlled from the exterior.  The standard way to do this is to get a roof rake and pull snow off the roof.  When this is not practical, roof de-icing cables can be used, but should be considered a last resort.  Click this link for more information about preventing ice dams from the exterior.

How To Remove Ice Dams (hire a pro)

There are plenty of hack methods for removing ice dams, so I tried ’em all out.  The methods I discuss involve an axe, ice pick, pantyhose, salt tablets, heat cables, a pressure washer, and even a blowtorch… just for fun.  I don’t recommend any of these though.  If ice dams need to be removed, hire a pro to steam them off.  Don’t let anyone near your roof with a pressure washer, or the shingles might end up like the ones shown below. 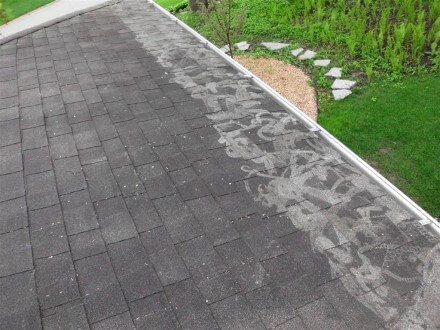 Click this link for more information about how to remove ice dams.

Here are a few more tips on preventing ice dams.  These deal more with the design of a house than anything else.

Ventilation plays a small role when it comes to preventing ice dams, because vents can help to cool the roof temperature.  The problem with roof valleys is that they can’t be vented.  If I were to design my own house, it would certainly be a big boring box with a plain hip roof; no valleys.

Valleys can’t be vented, they have a lower slope than pitched roofs, and ice from two roof surfaces gets concentrated.  Ice dams are always the worst at valleys.  What happens when two valleys meet each other?  The potential for ice dams goes way up.  In my humble opinion, this is just plain stupid design when it comes to performance. 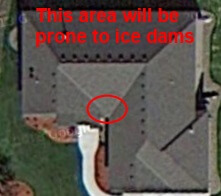 Oh, and don’t get me started on what this means for water management during the summer… never mind, I already blogged about that: Have Your Builder Plan for Water Management.

Don’t vent fans through the roof

What happens when bath fans and kitchen fans terminate at the roof?  Snow melts when the fans run, of course.  This leads to water running down underneath the snow, then freezing again at the eave, or in some cases, right in the middle of the roof. 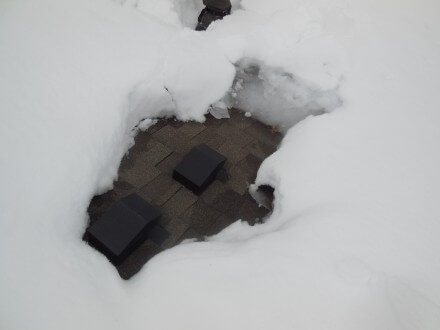 This can be a major contributor to ice dams, or in the case of the photo above, can be the sole cause of ice dams.  The way to avoid this is to have bath fans and kitchen fans terminate at walls, not roofs.  This also applies to clothes dryers; while it has become standard practice to put laundry rooms on the second floor in new construction homes and terminate the vent at the roof, I think this is a bad place to terminate the dryer duct.  It will melt a lot of snow, and there is usually no easy way to clean off the terminal.

Oh, and whatever you do, don’t place vent terminals for bath fans, kitchen fans, or clothes dryers in a place where the melted snow will pile up in a valley.  That’s almost a sure way to get ice dams, even if everything else is done properly.