How to prevent your outside faucets from freezing

With all of the recent cold weather, I’ve noticed a huge increase in traffic on one of my older blog posts on how to keep outside faucets from freezing.  I have a few more tips to add, so I’m re-blogging this post.

Most homeowners in Minnesota know it’s important to ‘winterize’ the outside faucets to prevent them from freezing, because freeze damage can destroy the faucet or lead to a burst pipe.  The problem is that many people don’t quite get it right; winterizing the outside faucets in the fall seems like a simple thing to do, and it seems like it should be straightforward and easy, but there are a few tricks you need to know to really get it right.

Garden hoses – First and foremost, disconnect the garden hose from the outside faucet.  If you leave your garden hose attached to the faucet, you’re asking for trouble. 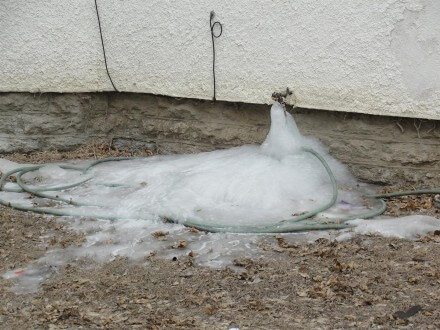 Determine if your faucet is frost-free or not.  A rule of thumb is that if the faucet has a knob that’s perpendicular to the house, it’s frost-free.  The knob turns a long stem that closes a valve inside the house where it’s warm.  If the knob is at a 45 degree angle, it’s not frost free, and it needs to be winterized.  This is only a rule of thumb though; if a boiler drain is installed at the exterior of the home, it will have a knob that’s perpendicular to the house, just like a frost free faucet, but it won’t be frost free.  The photo below shows an example of a boiler drain installed at the exterior of a house. 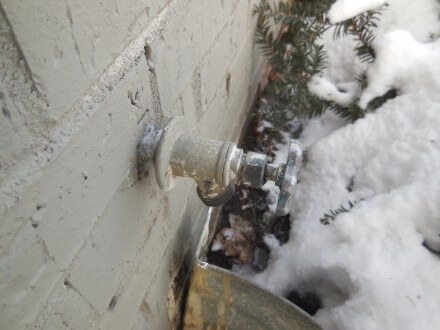 Post update 10/2018: Please ignore the advice above. The Woodford model 101 faucet is not a frost-free faucet, yet it’s completely indistinguishable from other frost-free faucets, save for the model number. Awesome.

When frost-free sillcocks aren’t installed with this downward pitch, water will sit inside the stem of the sillcock even when it’s turned off.  The pitch is a little dramatic in the photo below, but you get the point.

If this water freezes, it can burst the stem of the sillcock.  Most homeowners don’t know this has happened until the first time they use their faucet in the spring.  Once they turn their faucet on, water starts shooting out of the burst stem inside the house, making a big mess while nobody is inside the house to see it.  This happened to Connecticut home inspector James Quarello while he was inspecting a home a couple of years ago.  Better him than me, I say.

The fix for an improperly installed frost-free sillcock is to have it re-installed with a slight downward pitch.

Winterizing standard sillcocks  With a standard sillcock, the water needs to be turned off and drained out to prevent freeze damage.  To do this, you’ll need to first turn off the water supply to the faucet from inside the house.  Exterior faucets should have a separate shutoff valve inside the house, but not all of them do.  On older homes, these valves are typically located at the ceiling somewhere close to the outside faucet.  On newer homes, the valves are typically located right next to the main water valve, and they’re also usually labeled. 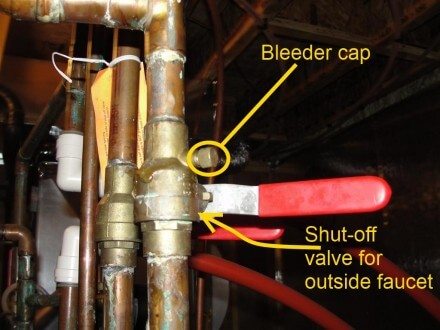 Sometimes, two wrongs really do make a right  Some older houses in Minneapolis and Saint Paul don’t have a shutoff valve for the outside faucet, and the faucets never get winterized… yet they never have a problem with freezing.  How can this be? 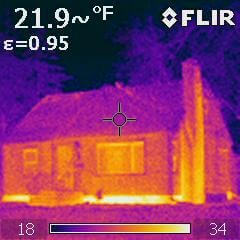 On older houses with no insulation at the rim space, there can be so much heat loss occurring here that the outside faucets never get cold enough to freeze.  I call this two wrongs making a right.  It’s certainly not a reliable method of preventing freeze damage, but it does seem to work.

If the vacuum breaker doesn’t have that white post, it may have a plastic ring that will allow it to drain.

What about those insulated faucet covers?  I don’t trust ’em.  They’re probably just a little better than nothing.  Don’t waste your time. 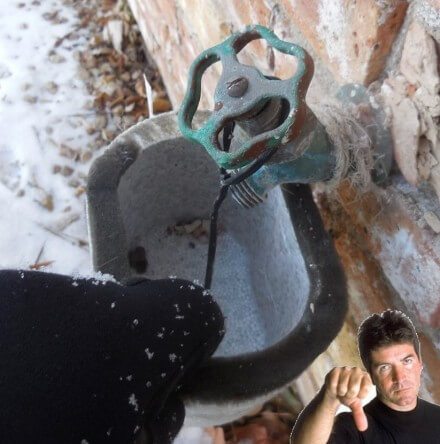 POST UPDATE 11/25/14: Forgot to Winterize Your Outside Faucets?  Here’s What to Do

63 responses to “How to prevent your outside faucets from freezing”