I recently had a major water leak in my kitchen which turned into an expensive problem. But I could have avoided the whole mess had I followed my own blog’s advice. Check it out.

Back in 2019, I installed a point-of-use water heater below my kitchen sink. I did this to eliminate a long wait for hot water, which was both annoying and wasteful. I blogged about this last year in Hot water faster. Life was great… until it wasn’t.

I came downstairs one morning to find water on the floor in front of my kitchen sink, and standing water inside the base cabinet. I cleared everything out to find the source of the leak, and finally discovered that it was the water heater itself. It wasn’t the T&P valve, it wasn’t one of the connections to the water heater… it was leaking right out of the middle of the unit.

I quickly turned the water off and took a very short video clip showing the location of the leak.

I cleaned up the water and bypassed the plumbing to the water heater so I’d still have hot water at my kitchen faucet, annoyed that I had to deal which such as hassle before my morning coffee. Ha! That was just the tip of the iceberg.

I did my usual morning routine, then headed downstairs for my morning workout about an hour later to find this: 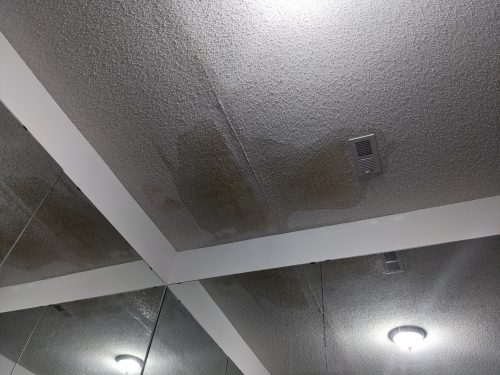 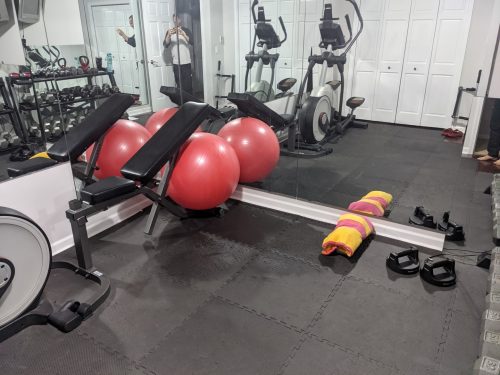 Apparently, the water heater had been leaking all night. The ceiling was saturated, the laminate flooring below the workout mats was soaked, and there was a lot of water in the wall. I contacted a water restoration company at that point, and they tore stuff apart and used commercial dryers for several days to help prevent future mold issues. 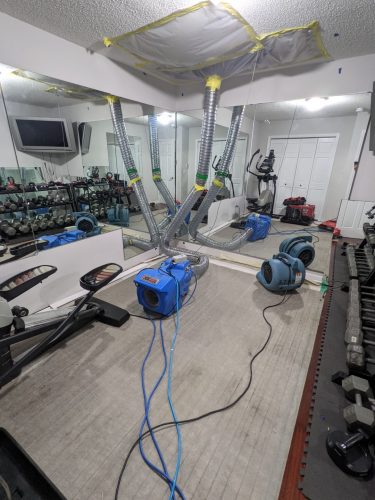 To get the room restored back to its original condition, I had to have the entire floor covering replaced, the drywall and insulation replaced on one wall, the ceiling redone, the room repainted, and a bunch of work completed in the kitchen as well. The project took way longer than it should have (that’s another story), but the bottom line is that this room was unusable for nearly six months. I paid a large insurance deductible and spent a ridiculous amount of time dealing with all of this.

Plumber Joe on my team (now a home inspector) blogged about how to prevent disasters like this a couple of years ago, under his guest post Automatic water leak protection. He installed a Guardian Leak Protection system at his house, which automatically turns off the water to your house if you have a problem.

I used to say that I’m not as paranoid as Joe, but I’m starting to think that I’m just not as experienced as Joe. Had I spent $300 for one of these systems and invested an hour of my time to install it, I could have avoided this entire mess. You better believe I have one of these systems installed today, along with leak detectors below my kitchen sink, dishwasher, refrigerator, and washing machine.

4 responses to “My kitchen disaster”