The HIKMICRO Pocket 2 infrared camera might be the new standard for home inspectors at my company. I reviewed the HIKMICRO B20 “pistol” style infrared camera a few months ago and said I’d follow up with a review of their new pocket camera as well. Selling for $599 on Amazon, this is a direct competitor to the FLIR C5 infrared camera.

The Pocket 2 is almost a clone of the FLIR C5. It’s about the same thickness, height, and length.

The buttons are located in the same place, the tripod mounts are the same, and the lanyard straps are the same… to the untrained eye, it’s tough to tell these two cameras apart. It’s about the size of a phone, so it’ll easily slip into a pocket. It has a rubberized exterior, making it nice and grippy. It also has a decent LED light in front.

Resolution: 256×192. That’s the same as the B20, but this is a landscape view instead of a portrait view. Yay! Much better. As home inspectors, we use landscape views or square images for everything. The FLIR C5 has a resolution of 160×120, giving the Pocket 2 a solid edge on paper. But as I’ve learned through many head-to-head camera comparisons, the proof is in the pudding. Resolution alone is just one part of the equation.

Thermal sensitivity: <40mK. Also known as the Noise Equivalent Temperature Difference, or NETD, the lower the number, the better. It tells you how well the camera can identify small differences in temperature. The FLIR C5, for comparison, has an inferior rating of <70mK.

Storage: 13.2 GB. With images averaging 450 KB apiece, this might let you store about… oh, never mind. It’s a ton, ok? More than anyone will ever need. The published specs say 16 GB, but the actual space you have to work with is 13.2 GB.

Battery life: 4 hours. This is plenty for a day of doing home inspections.

Just like the B20, the Pocket 2 makes it very easy to cast images from your infrared camera to your mobile device. You simply connect to the camera’s wifi network, then open the mobile app and your mobile phone shows whatever your Pocket 2 camera can see. The cool part about this is that you can save the infrared images directly to your mobile device this way.

This camera does a very nice job of combining the visible light spectrum with infrared images. This makes it much easier to understand exactly what you’re looking at. The two images below show an example of infrared only, and another with image blending turned on.

Just like the B20, you need to hit the capture image button twice to capture an image. I’m sure I could get used to this over time, but again, WHY? Every other camera lets you capture an image with a single click. I hope this gets fixed with a firmware update.

Also, this camera has a very fast 10-second boot time.

My biggest complaint with this camera is that you can’t capture infrared images and regular images with a single click. I complained about this same thing with the B20 camera, and they came out with a firmware update to fix that. Maybe a firmware update could fix that for the Pocket 2 as well?

Also, there are basically three different menus for this camera; one is the “local settings” menu which is accessed through a softkey. Another is the images menu, accessed by hitting an on-screen “menu” button. The third menu is six different “quick settings” of on/off toggles, along with the brightness slider. 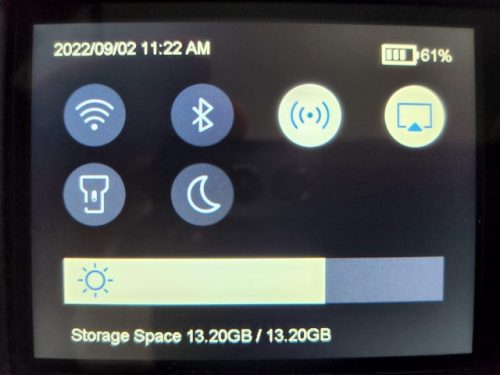 This is the only way to turn the LED on and off, so it’s nice to have it quickly accessible, but the menu does not consistently pull down when you swipe your finger from the top. While writing this, it just took me four attempts to get it to work. It only works consistently if you intentionally pull your finger straight down the screen, which is not what you tend to do if you’re holding the camera with one hand and using your thumb to swipe.

Naturally, I compared this camera side-by-side with the FLIR C5. Check ’em out, and click on any of the images for a large version.

I definitely prefer the images produced by the Pocket 2 camera. The subtle differences in temperatures are much easier to pick out with the Pocket 2. Given the comparable price point to the C5, this camera has the potential to be our new favorite for home inspection work.