The folks at HIKMICRO recently reached out to me about testing one of their infrared cameras, and they sent me a B20 camera to try out. The specs look pretty comparable to the FLIR E6-XT, but this camera retails for $549 on Amazon, which is about a quarter of the cost of the FLIR E6-XT. But I’ve learned that specs alone never tell the whole story, so I was quite skeptical. Because the E6 is a very similar camera that I’m quite familiar with, I’m going to compare these two cameras a lot in this review.

Note: the new version of the E6 is the E6-XT. I don’t own that camera.

The B20 is a traditional pistol-style infrared camera with a handle, a trigger, and a screen. It’s significantly smaller than the E6 in every dimension, which is great.

For home inspection work, the smaller the tool the better. It has a built-in lens cover for the infrared portion of the camera, but the optical lens doesn’t get covered by this. Why not? I think it should, and a slight modification to the design could have made this happen. Oh well, not the end of the world. I forget to use my lens cover half of the time anyway.

This camera takes pictures in portrait mode, which is definitely not my preference. All of the photos that we use for inspection reports are either in landscape mode or they’re square images. If we started using this camera for our reports, we’d likely hold it sideways, which means any temperature readings on the screen would appear sideways. Again, not the end of the world, but not ideal.

Unlike the E6, the B20 does not have a removable battery. Not a big deal, as it claims to have a 6-hour operating battery life. Wow. It also has a USB-C charging port, which is great.

Update: A firmware update has fixed this limitation, and the B20 can now capture optical and infrared images simultaneously, which is fantastic.

The real value of the optical camera is that it gives the B20 image blending, which combines an infrared image with an optical image. To see what I mean, check out the two comparison images below. 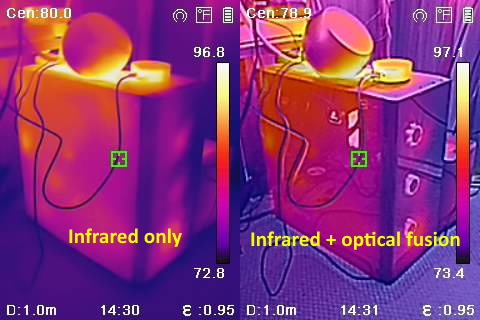 Because the blended image looks so good, this is probably the only setting that I would use for home inspections.

After downloading the mobile app for my phone, casting the infrared display to my phone was a snap. This is a handy feature for home inspectors who write reports on their mobile devices because the images are captured right where they need to be. There’s no need to manually transfer IR images from my camera to a computer or mobile device.

To take a photo with this camera, you need to pull the trigger twice. This is very annoying. Every infrared camera I’ve ever used takes a photo with one trigger pull. I hope future versions of this camera will change that or at least have a menu option to let me change that.

Fast boot. This camera takes about 10 seconds to boot up, which puts the E6 to shame. The E6 takes about 45 seconds. On the negative side, there’s no “sleep” feature for the B20. When you turn it off, it’s fully off, and you have to fully boot up again every time.

I captured several infrared images side-by-side with the FLIR E6. The B20 is on the left, and the E6 is on the right. Because the B20 takes images in portrait orientation, I held the E6 sideways to record these. 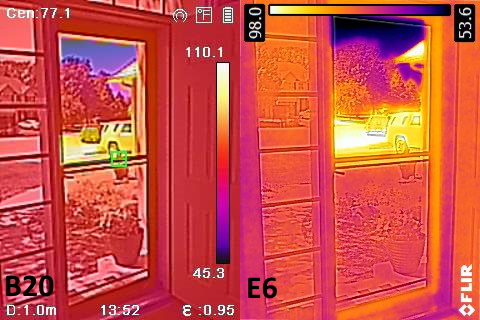 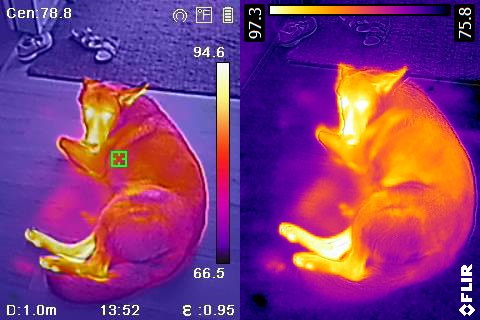 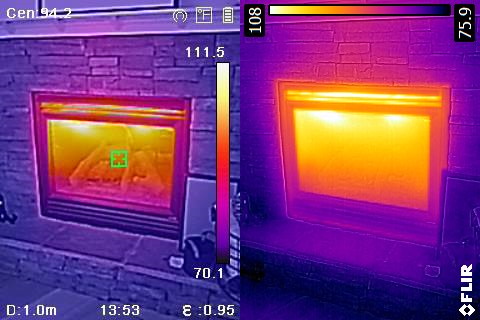 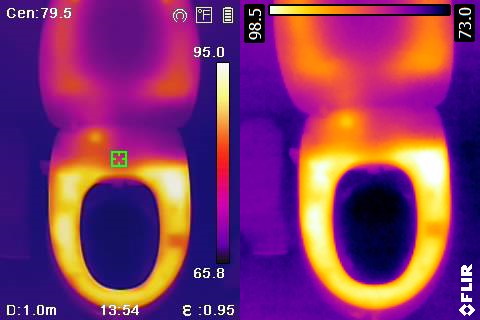 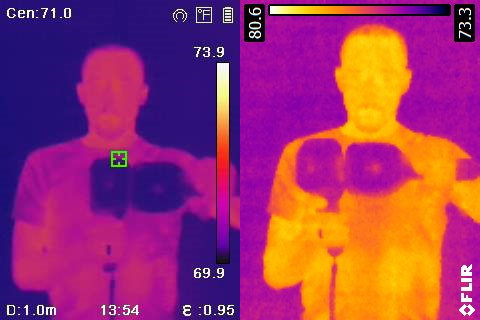 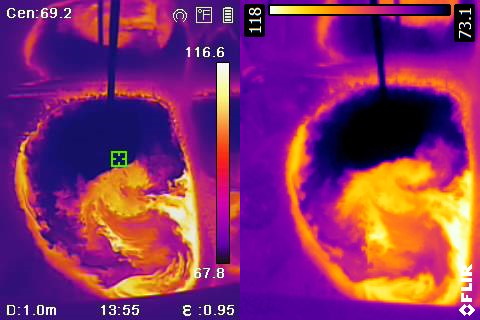 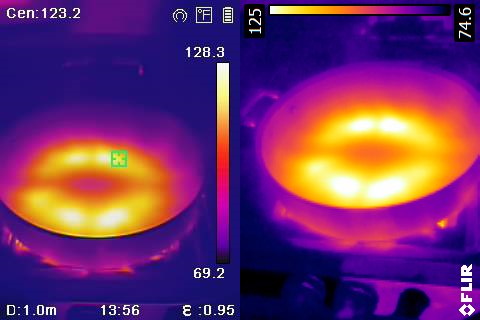 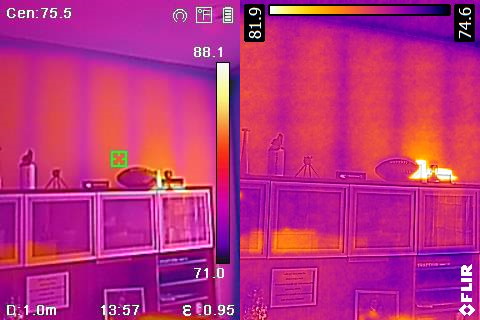 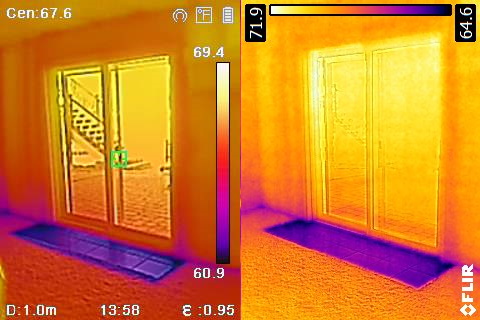 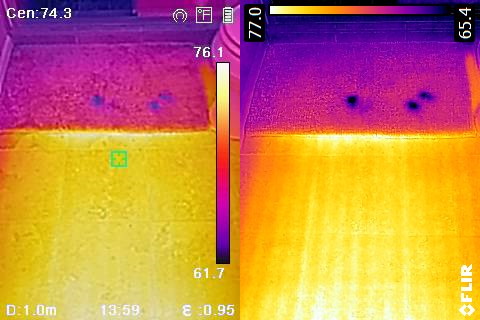 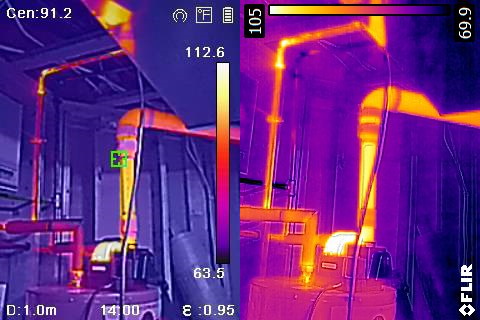 I’d say these images are comparable, but the blending of the infrared and optical images on the B20 tends to wash out some of the color differences. I personally prefer the look of the E6 images, but it’s not a huge difference. And just for fun, here are a couple of infrared-only images from both cameras: 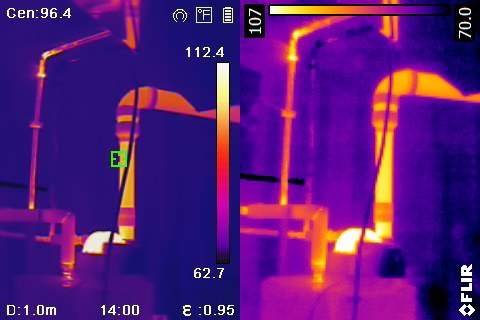 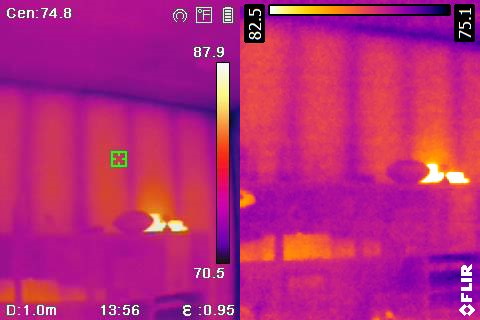 The B20 clearly looks crisper and more defined, but it’s not an apples-to-apples comparison because the E6 only has a resolution of 160×120.

I’d call these two cameras comparable. I don’t like everything about the B20, but considering the fact that I could buy four of them for the price of a comparable FLIR, it’s very hard to justify the price of a FLIR camera.

Also, we’ve started using the FLIR C5 pocket cameras in place of the E6 cameras at my company, and HIKMICRO makes a direct competitor to that camera for a similar price, called the HIKMICRO Pocket2. Look for a review of that camera in the coming months.