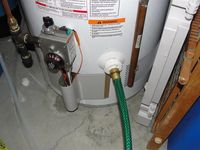 If the drain valve leaks when you’re done, don’t worry.  The cheap, easy, and effective repair is to screw a garden hose cap on to the end of the drain valve.  This is a perfectly safe and perfectly acceptable repair. 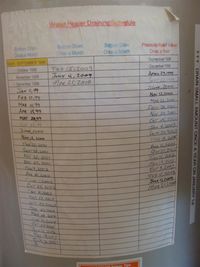 If you have a new water heater and you’re a diligent homeowner, go ahead and flush your tank every month.  If you have a water heater that’s several years old and has never been flushed, I’ve heard it’s better to just leave it alone.

Every year, the temperature and pressure relief valve is supposed to be opened to allow several gallons of water to drain out.  Doing this will help to clear out sediment accumulation, and will let you know that the valve still operates freely. 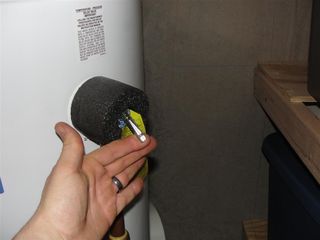 The problem with this test is that the valve may not close properly after it gets opened.  The older the water heater, the greater potential you have for a leaking valve.  If the valve leaks after this test, it can be replaced.  Temperature and pressure relief valves sell for about $10 – $15, and they’re fairly easy to replace.

Every year, the sacrificial anode rod is supposed to be checked for deterioration and replaced if necessary.   The purpose of the anode rod is to save the rest of the water heater from destruction by sacrificing itself.  Hey, maybe they should call it a Jesus rod ;-).  I don’t remember much from chemistry, but I found this text by doing a quick google search:

Cathodic protection is a scheme in which a piece of reactive metal, typically magnesium, is connected to the steel to form an electrochemical cell. Magnesium ions (Mg2+) form more easily than iron ions and enough electrons are given up by the magnesium atoms as they become positive ions to completely dominate the hydroxide ion formation process. With nowhere for their electrons to go, the iron atoms can’t become iron ions and rusting can’t proceed. As long as the magnesium metal, often called the “sacrificial anode”, remains intact and connected to the steel, the steel won’t rust significantly. 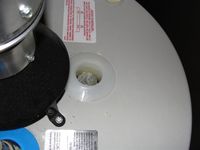 There are four problems you might run into if you want to check on / replace your anode rod:

Sorry to be cynical, but checking on and replacing an anode rod is too difficult.  When the manufacturers make it just about impossible to do this step that’s supposed to dramatically increase the life of your appliance… of course nobody is going to do it.  What incentive does the manufacturer have in making this step easy?

By the way, if you do happen to replace your anode rod, I’ve heard you’re supposed to save the old magnesium rod for Independence Day.  That’s just what I’ve heard.  Good times.