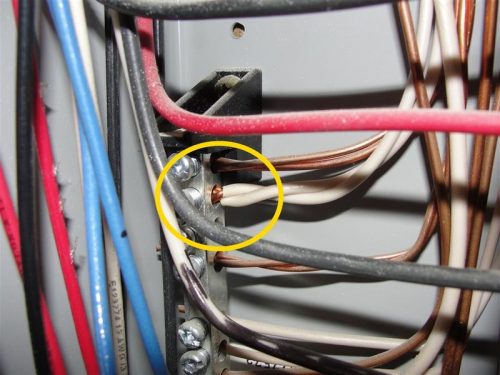 The problem I’m addressing today is double tapped neutral lugs in electric panels.  A ‘double tapped neutral’ is a slang term for saying that one of the screws on the neutral bus bar in the panelboard has more than one neutral wire feeding to it.  This is a no-no, and has been for a long time.

One reason that two neutral wires can’t be connected to a single terminal in a panelboard is so that the circuit can be isolated if it needs to be worked on.  There is a great explanation of this Schneider Electric here: Can Multiple Neutral Conductors be Terminated in a Panelboard Termination?

The other reason two neutral wires can’t be connected under a single lug is because the connections might come loose, which could lead to a fire.  The images below show an overheated conductor at a double-tapped neutral lug.  The left image shows the original photo, and the right image has a thermographic overlay from an infrared camera.

While panel manufacturers will allow for up to three grounding conductors under a single lug, they typically only allow one neutral wire.  The grounding conductors aren’t going to normally carry current for extended periods of time, so they have a very slim possibility of coming loose.  This isn’t the case with the neutral conductors.

Despite what many seem to think, this didn’t become a new requirement in 2002.  This has been a requirement of UL 67 for a long time, but was spelled out in the NEC in 2002.