Water Heater Backdrafting: What if you can’t reproduce the problem?

Here’s a question that was recently emailed to me:

I was reading your blog and wondered if you could help me. My home is under contract for sale and the buyer’s inspector noted that the water heater had a backdraft. I found this odd as it was only installed two months before. I had an HVAC tech come today to check and he verified that he could find no backdraft. Upon looking closer at the inspection notes from the buyer I saw the picture he took of the deformed grommets on the appliance. I called him and he explained that this was a sign of a backdrafting because only the sides near the vent were deformed. I see what he means, but no matter what conditions I produce in the house for fans, vents, open doors, hot water running, furnace on, etc. I can’t produce conditions that create a backdraft.

Do you have any advice?

I’m assuming he was reading my blog posts on backdrafting water heaters.  I wrote two on this topic a little over a year ago; the first post, titled Water Heater Backdrafting: Why it matters and what to look for, explained what this is all about and how to find signs of a problem.  The second post on this topic was titled Water Heater Backdrafting: Why it’s happening and how to fix it; pretty self explanatory.

The deformed / melted grommets that were mentioned in his question are the pieces of plastic shown in the photo below. 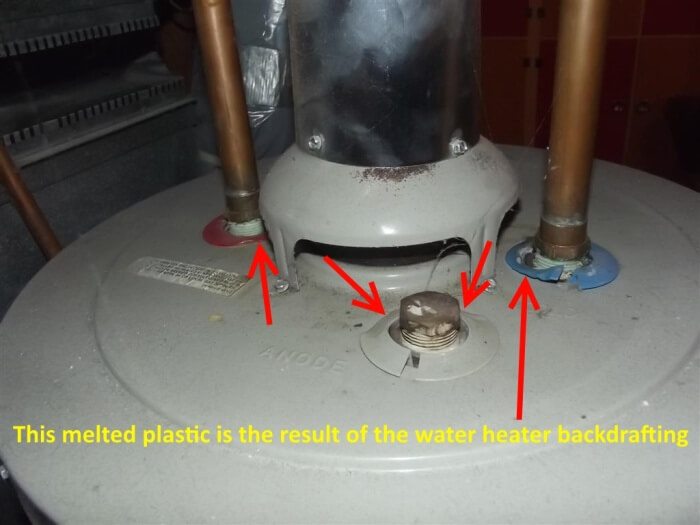 Note how the melting only occurs on the sides that face the draft hood; this is a dead giveaway that the melting was caused by the water heater backdrafting. 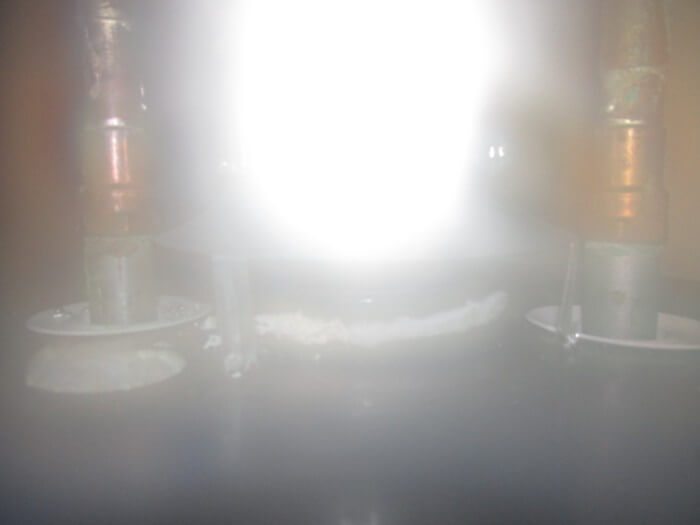 As far as I’m concerned, BPI’s standards are good, but they’re not perfect. To establish a worst-case scenario, BPI standards say to turn on all of the exhaust fans, but what happens if the home has an attic / roof fan?  Those fans are (almost) exclusively installed in homes with horrible attic air leaks, and as such, they can cause major depressurization of homes.  This isn’t new info; check out this article from 1995 explaining the danger of these fans: The Dangers of Powered Attic Ventilators.   If you’re really going to create a worst-case scenario test for water heater draft, if there’s an attic fan present, you better turn it on.

As a home inspector, I already do most of the stuff that BPI lists in their standards, but I don’t go around opening and closing doors and measuring pressures in the combustion air zone to figure out the exact worst-case scenario.  I just get pretty close.  If this test procedure causes the water heater to backdraft, check out my blog post on why it’s happening and how to fix it.

Draft is a funny thing, and it’s not 100% reliable.  This is why powervent water heaters are getting more and more popular, and why energy professionals all seem to hate natural draft water heaters.  Sometimes, all it takes is an unusually windy day to cause a water heater to backdraft.  I actually experienced this in my own house a couple of years ago.  During an extremely windy day, I noticed the tell-tale odor of combustion gases in my basement.  I immediately went over to my natural-draft water heater, and sure enough, it was backdrafting.

This only occurred for a few minutes, but the hot gases spilling back into my home were enough to slightly deform one of the pieces of plastic at the draft hood, which now serves as a nice reminder that any natural draft water heater can backdraft.  For the record, BPI standards for draft allow appliances to backdraft for up to 60 seconds upon startup. 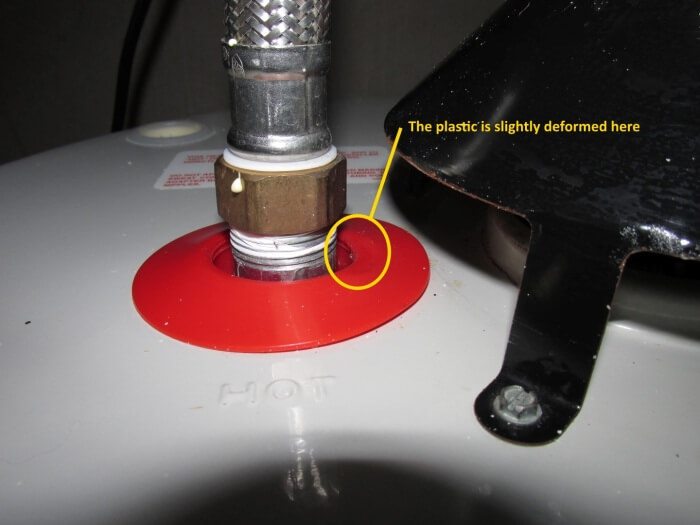 By the way, yes, that’s an illegal flexible connector on my water heater.  It was there when I bought my house and I don’t have a problem with it.

While I think it’s a bit of an extreme measure, one way to make a natural draft water heater a little safer would be to have a spill switch installed at the draft hood.  This is a fairly simple safety device that will shut off the water heater if backdrafting is detected.  Here’s an example of such a beast: SSK3 Spill Switch Kit.  According to Bruce Strandberg at BWS Heating & Air Conditioning, these devices would cost about $125 for an HVAC contractor to install.  I haven’t seen one of these in many years, so I don’t have any great photos to share of an installed spill switch, but you can find a photo here: http://www.wheatandsons.com/recent-jobs/draft-spill-switch/