At the end of August, I wrote a review about the Flir One infrared camera for the iPhone 5.  This may have been the first infrared camera designed to be used as a toy; the quick start guide that comes with the camera even says it’ll help you gain a super power.  At the time, it was selling for $350.  The price has since dropped to $250.  Unfortunately, us Android phone users were left in the dark visible light spectrum, until now.  Seek Thermal has come up with a $199 infrared camera that works with several models of iPhones and Android phones.  I tested this camera with my Samsung Galaxy S4.

The Seek Thermal camera is very small, and plugs into the USB port at the bottom of the phone.  There are no batteries to charge, no special cables to use, nothing like that.  All that’s needed to get started is to install the Seek Thermal app from the Google Play store. 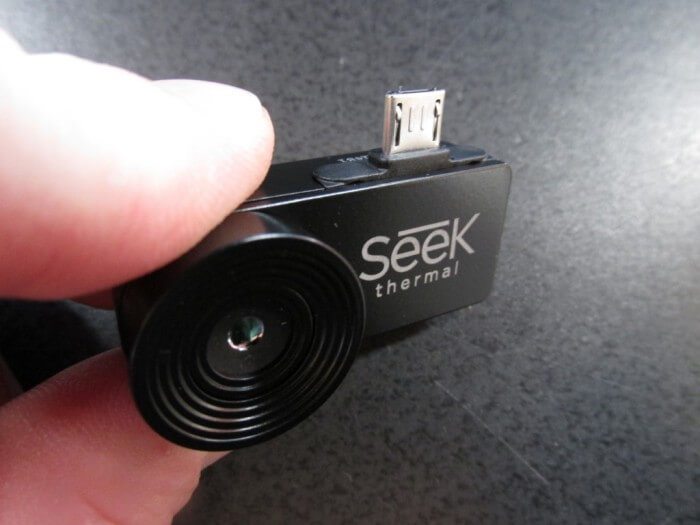 It’s tiny.  Because it connects to the phone through the USB port, drop it once and it’ll surely be toast. 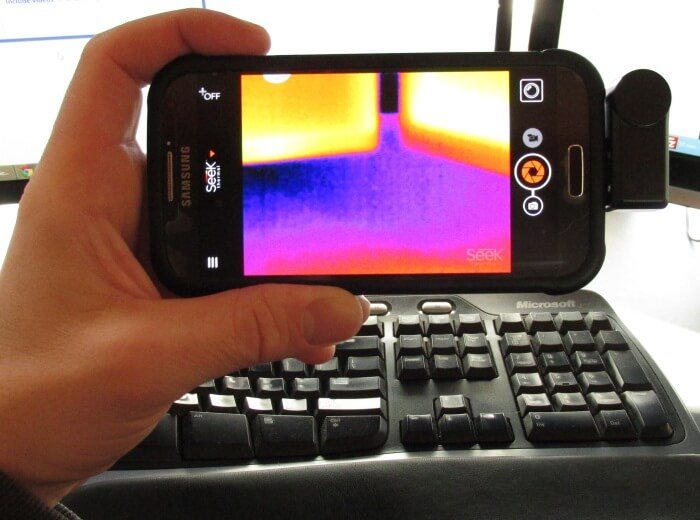 The software is similar to the software for the Flir One.  It takes photos, records videos, there are a bunch of different color palates to choose from, it has a spot meter function that is supposed to display the surface temperature of whatever you’re pointing the camera at, and a few other options.

I’ve gotta be missing something here.  The Seek Thermal web site says “206 x 156 Array”, and “32,136 Thermal Pixels”.  My $2,500 Flir E6 camera has a resolution of 160×120, giving a total of 19,200 pixels.  Given those numbers you’d think the Seek Thermal camera would produce a much better image, but that’s definitely not the case.  This makes me question the validity of judging an IR camera by its resolution.  Thermal sensitivity might be a nice metric to use, but I can’t figure out what the sensitivity of the Seek Thermal camera is.

While the $250 Flir One camera has a second optical lens which blends optical images with infrared images to give an easy-to-understand hybrid image that outlines the high-contrast images, the Seek Thermal camera doesn’t have that option.  The two images below were taken with a Flir One camera, with and without MSX turned on.  These images were taken during the summer, when there wasn’t much of a temperature contrast.

The real ‘infrared information’ you’re getting from the two images above is identical, but the image on the left is much more pleasing to look at.  That’s the beauty of MSX technology, and that’s what you’re missing with the Seek Thermal camera.

Here are a few side-by-side image comparisons of the 206×156 Seek Thermal on the left and the 160×120 Flir E6 on the right.  First, a shot of my basement.  These were taken just recently, giving some nice thermal contrasts.

For the record, I turned off the MSX feature on my E6.  With the MSX turned on, there’s just no comparison. 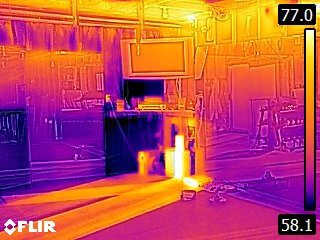 A warm circuit breaker at my electric panel.

The bottom of my front door with the outdoor temp at -4° F.

My living room wall with the outdoor temp at -4° F.  The cold vertical lines are studs, and the warm vertical line is a heat duct in the wall.  The square at the lower portion of the wall is a canvas painting.

The images don’t look nearly as good as the images on my lower-resolution, higher priced Flir E6, even with the MSX turned off.  I suppose it’s like comparing pixels on a regular camera.  While the camera on my mobile phone takes 13 megapixel photos, the photos aren’t nearly as nice as the photos I take with my point and shoot camera set to a lower resolution.

As I mentioned at the end of my blog post about the Flir One, this isn’t a substitute for a dedicated infrared camera.  This a device to buy if you want to play around your house.  If you’re in the market for an infrared camera for your phone, I think the Flir One is worth the extra $50 if you have an iPhone 5, simply because of the MSX technology that makes the images look so much better.

One response to “Seek Thermal Infrared Camera: A $199 IR Camera for Androids and iPhones”