The light was left on all night? Don’t lose sleep over it.

When it comes to energy usage, I think with my emotions. When I wake up to a light left on in the kitchen, I imagine my energy meter spinning and I dread the gigantic electric bill we’ll get next month. When one of the kids leaves the patio door open while the AC is on, I think about trying to cool the whole neighborhood and all of the money we’re wasting. Or if I forget to turn off my ceramic panel heater in my office after leaving the house… oh boy. Boatloads of cash out the window. But how much money and energy do all of these things really cost? I thought it might be fun to put some actual numbers to these egregious offenses that I get way too worked up over.

Lights left on all night

I frequently go downstairs in the morning to find the same hallway lights left on all night. 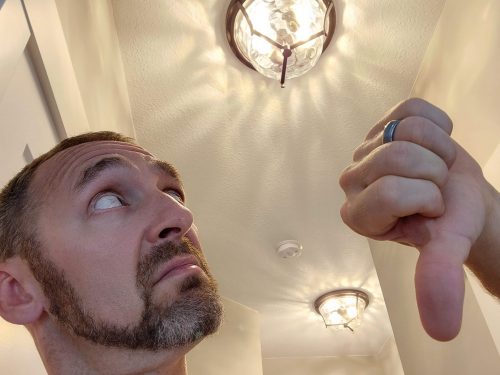 It’s so annoying that I’ve thought about installing a motion sensor to put an end to this waste. But could that ever be worthwhile?

There are two lights in the hallway, and each has two LED bulbs using nine watts apiece. So all four bulbs use 36 watts, and if I multiply that by 8 hours, I have 288 watt-hours. I currently pay about 14 cents per 1,000 watt-hours (aka KiloWatt Hours, or kWh), which means those lights just cost me a whopping 4 cents. Yep. I’ll take it out of the kids’ college fund next time.

A motion sensor, aka occupancy sensor, would turn the lights off for me automatically. Home Depot sells one for about $23, and I’d install it myself, so there wouldn’t be any additional costs. The break-even point for me would be after the lights were left on all night 575 times. Ha! Occupancy sensors are very handy for turning on lights when needed, but you’d have to have a very serious energy suck to have one of these sensors ever pay for itself.

Leaving the door open to the outdoors will waste energy if the heat or AC is running. You’re either heating or cooling the whole neighborhood because someone was raised in a barn.

So what does this actually cost? It’s summer, so we’ll look at AC usage. Between the furnace blower fan and my AC compressor, running the AC pulls about 2400 watts. How much of an effect does an open door make on this? That depends upon the outdoor temperature, and what I have my AC set to. In other words, I don’t exactly know. But I do know what it costs to run my AC: about 37 cents per hour. And for the record, I have a 3.5-ton 13-seer unit. It’s a pretty average size, not particularly large or small, and it ranks pretty low on the energy efficiency scale.

I like warm feet during the winter, so I keep a ceramic wall panel heater under my desk for the coldest days. 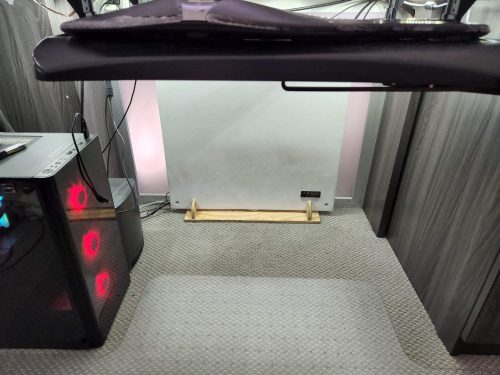 I love this thing, but sometimes I’ll leave my office and forget to turn it off (gasp!). My self-imposed punishment for my complete and total carelessness is 50 burpees. But just how bad is this? If I leave this 400-watt heater running for 4 hours, it costs me a little less than a quarter.

But what about a bigger space heater, like a four-foot 1,000-watt baseboard heater? Those cost $0.14/hour while running… however, they don’t constantly run unless the thermostat is cranked up as high as it’ll go. They cycle on and off, so the cost will surely be less. We once had a home inspector on our team forget to turn off the heat to a baseboard heater (shame on us). The homeowner was livid because the heater had been running all afternoon, costing them “hundreds of dollars” in electricity. Of course, we were in the wrong, so we didn’t try to defend ourselves. We wrote them a check for about 200 times what the electricity surely cost, largely as a gesture of goodwill to say we were sorry.

I hate wasting electricity, but it’s nice to put this into perspective. I’m mostly writing this blog post to calm myself down, and I thought there might be a few other parents who would appreciate this information.

One response to “The light was left on all night? Don’t lose sleep over it.”