Today I’ll cover the basics of shut-off valves; we’ll discuss different types and the pros and cons of each. We’ll start with my least favorite valve first. And yes, I have favorites.

Stop valves, aka globe valves, are only meant for water. They’re commonly found at plumbing fixtures, such as the water supply line to your toilet or as part of your outside faucet. A stop valve works by moving a stopper up and down. The photos below show a stop valve in the open position, halfway open position, and fully closed position.

Open or closed: To know if the valve is open or closed, take a look at the stem. If you carefully examine the stem in the photos above, you’ll see that when the valve is fully closed, the stem isn’t visible at all. Most stop valves are much smaller than the one pictured above, but I decided to use a larger one for my example because it gives the best view. The photo below shows an exploded view of the guts of a stop valve.

And here a quick animation of one in action:

Stop valves take several hand movements to operate and they tend to get difficult to operate over time. They also leak when they haven’t been touched in a while. For this reason, no home inspector should ever touch one of these valves. Yes, I’ve learned the hard way. If you have a leaking stop valve, you can often stop the leak by using a wrench to tighten the nut right below the handle. Lefty loosey, righty tighty. But this won’t always stop the leak, because sometimes new packing is needed.

Like stop valves, gate valves are only meant for water. They have a round handle that’ll shut off the flow of water by essentially closing a gate. The three photos below show a gate valve in the open position, halfway open position, and fully closed position.

Open or closed: As you can see, the handle never goes up and down as the gate opens and lowers; for this reason, it’s impossible to know if a gate valve is in the open or closed position just by looking at it. The exploded view below shows what the guts of a gate valve look like.

And here’s an animation showing it in action:

A gate valve has a very large opening for water to pass through, making it less restrictive than a stop valve. Like stop valves, these tend to stick over time and they’re prone to leaking when they haven’t been touched in a while.

Ball valves, also known as quarter-turn valves, are used for water, oil, and gas. They have a handle that operates a concealed ball with a hole through the middle. As the name implies, you give this valve a quarter turn to fully open it or close it. 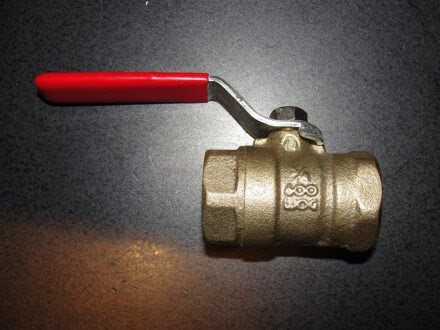 Ball valves rarely leak, they’re much easier to operate, and they don’t stick with age. So yes, these are my favorite.

Lube valves, aka grease valves, are used for gas. They’re similar to ball valves, but they rely on a lubricant to help keep them operable. They’re easy to distinguish from traditional ball valves because they have a nut directly across from the handle, allowing you to disassemble the valve to add lubricant. 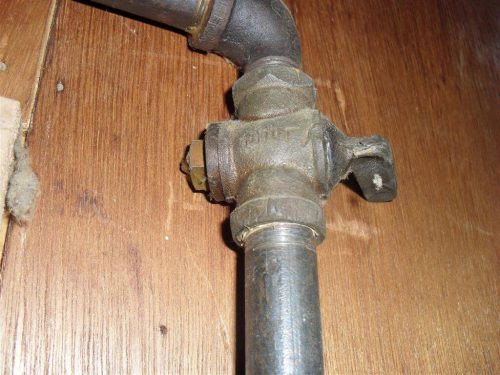 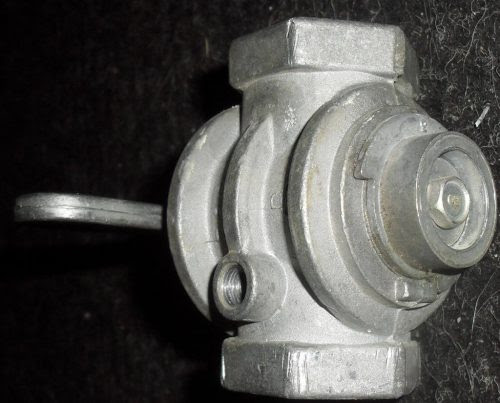 The image below shows an exploded view of a lube valve. 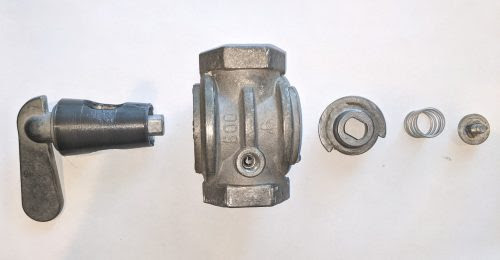 Open or closed: Just like ball valves, the valve is open when the handle is parallel with the pipe, closed when perpendicular.

These valves work fine if they’re periodically serviced, which isn’t that big of a deal. You simply turn off the gas to the entire house, take the valve apart and lubricate it, put it back together, turn the gas back on, and re-light your pilot lights. Oh wait, maybe that is kind of a big deal. That’s why nobody ever does this, and that’s why we find a lot of gas leaks at these valves. They also get very difficult to operate over time, so we often find broken handles at these valves. It’s because someone couldn’t turn the valve off, so they put a wrench to it, and it was so stuck that the handle actually snapped off.

If you have any of these valves at your home, it’s a good idea to have the valve replaced when you have the appliance replaced that it’s serving.

Gate valves, stop valves, and ball valves are the most common types of shutoff valves to find in your home. If you have any projects that require replacing valves, I recommend using ball valves, also known as quarter-turn valves. They’re better in every way, and they don’t cost much more than the other types.