I’ve been doing this home inspection thing for a couple of decades, and I have yet to sit through a single class where the teacher is 100% on-point when it comes to combustion testing of furnaces. I’ve heard a ton of conflicting information from so-called experts in the field. So much so that at one point, I almost decided to stop doing combustion testing on furnaces altogether. But we still do combustion testing here at Structure Tech, and we’ve been using the same test methods for the last decade or so. Today, I’ll share what our policies and procedures are for performing carbon monoxide testing on a furnace, along with some hard and fast rules that I know for certain.

Carbon monoxide, also known as CO, is an odorless gas that is produced by fuel-fired equipment. If a furnace were to burn all of its available fuel, and I mean 100%, you’d have something called stoichiometric combustion. There would be no carbon monoxide generated, and no wasted fuel. In the real world, this is also called Theoretical Combustion, because it doesn’t happen. There’s always some amount of CO generated by a furnace, and that’s acceptable.

If a furnace produces too much carbon monoxide, it’s not burning properly which is a waste of fuel. And the higher the CO level, the greater the potential danger for people living in the home. Even though all of the exhaust gas for a furnace is supposed to be exhausted to the outside, things happen. Furnaces can backdraft, exhaust gas can leak out of appliances into the home, and cracked heat exchangers can allow carbon monoxide to leak into the air stream for the home.

The national fuel gas code allows for a maximum of 400 parts per million of CO, measured air-free. The air-free part is important because it’s not the same as a raw number. If I were to measure the CO level on powervent water heater and I only used a device that tested for CO, I’d surely get a low reading. This is because direct vent water heaters pump a ton of air into the exhaust vent, significantly diluting the amount of CO. But if I used a combustion analyzer to do my measurement, it could perform an air-free calculation to give me a much better idea of how the water heater is actually producing.

How much CO is acceptable?

As I mentioned earlier, the maximum is allowable CO in a vent is 400 ppm air free. If the CO level is over this number, our policy is to alert the homeowner ASAP, and conditions permitting, turn off the equipment. If it’s in the dead of winter on a vacant house, we certainly wouldn’t do that, however.

But what about lower levels? If a furnace is running at 300 ppm of CO in the vent, is this acceptable? If you strictly go by the national fuel gas codes, yes. But the generally accepted standard is really to have a CO level below 100 parts per million. Every HVAC contractor I’ve talked to and learned from uses that same standard. They admit that while it’s not a pure code violation for an appliance to have higher levels of CO above 100, this will usually mean that the appliance is not burning properly, and there’s usually something that can be done to make it better.

Besides all of this word-of-mouth around the number 100, the local gas companies have used this number for a long time when evaluating furnaces. They’ll yellow-tag equipment producing CO above 105 ppm, and they’ll red-tag it when the CO is above 250 ppm. Here’s their chart, which someone was kind enough to share with me a few years ago: 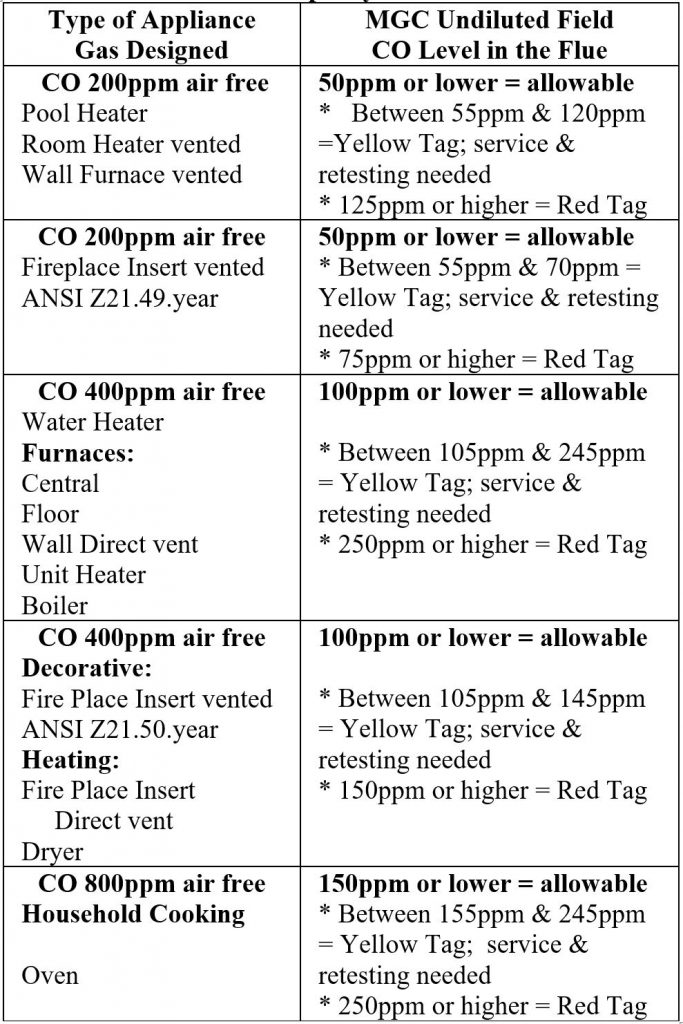 When to test for CO

How long should a furnace run for before testing for CO? Fifteen minutes? Five minutes? I’ve heard numbers all over the board, but the most consistent answer I’ve heard, and the one that is referenced in the Minnesota State Fuel Gas Code (Chapter 9, Subp. 6) is to wait until “the stack temperature becomes stabilized”. In other words, wait until the temperature in the flue stops rising. Once the temperature has reached a steady state, you’re good to test. I’ve found this usually happens within about 5 minutes.

Where to test for CO

For an older style of furnace with several heat exchanger cells, each one of the cells should be individually tested before the draft hood. The image below shows one such type of furnace. 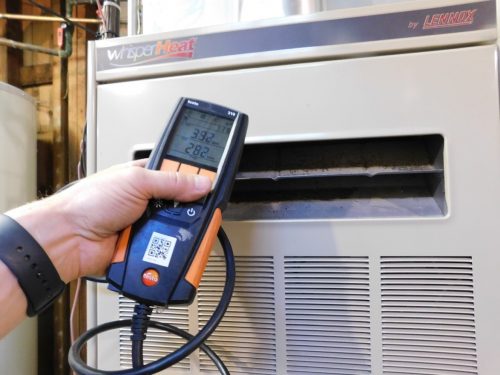 If it’s a more modern furnace with a draft fan, there’s no draft hood. In those cases, we need to test after the draft fan. Combustion analyzer manufactures say to test approximately 6″ higher than the draft hood. There’s usually a 1/4″ test hole in the vent that’s covered with a piece of metal tape, which the installer used to test the appliance when it was first installed. We use that same test hole, and we cover the hole with UL 324A Listed foil tape. 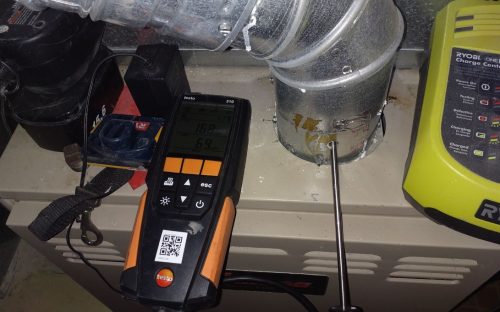 For high-efficiency furnaces with plastic vent pipes, we test the exhaust at the exterior. 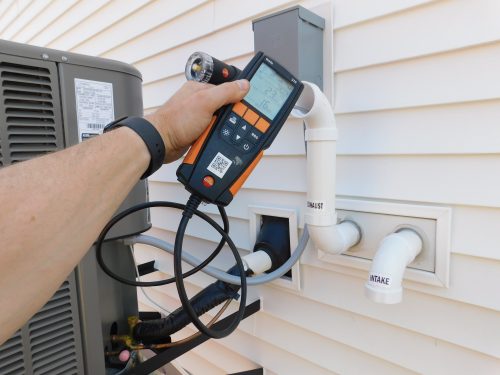 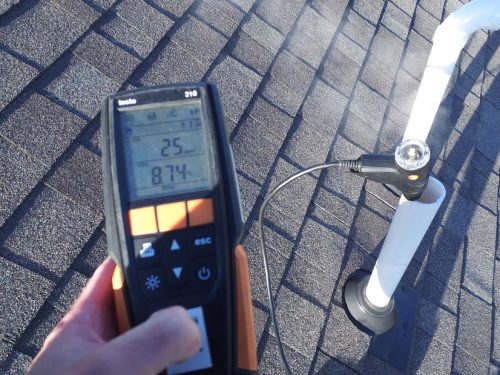 We don’t drill holes in PVC pipes, but if someone else has already drilled a hole, we’ll happily re-use it. 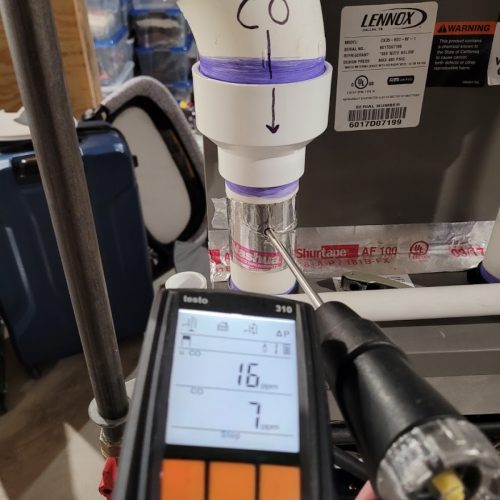 Occasionally, we’ll find a furnace or boiler with a built-in test port, which we’ll happily use. 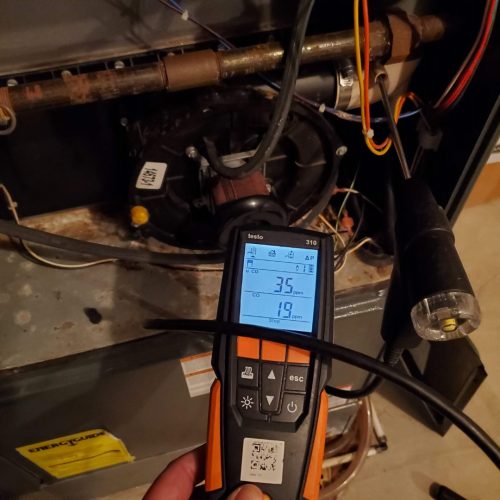 We’ve heard some people say that these are most certainly not built-in test ports. That’s cool. But the flue gas measurements are the same here as what we find at the vent terminal, so we’re happy to use these ports.

And some installers like to add their own test hole in the vent with a removable plug. These are awesome. 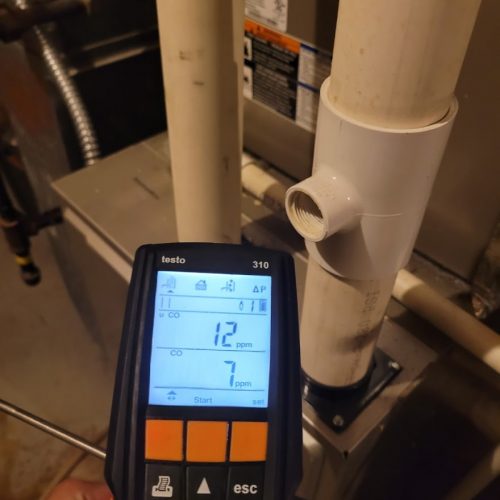 The image below shows a boiler where the installer may have overlooked the test port and drilled their own hole anyway: 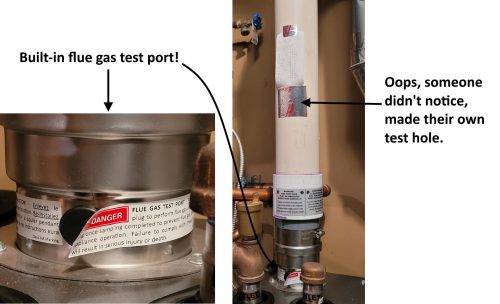 We’ve had home sellers question the accuracy of our CO tests many times over the years. To ensure accuracy, we cross-check our equipment monthly and we regularly send our equipment away for calibration. We use the Testo 310 combustion analyzers, and we’ve found them to be extremely rugged, durable, and accurate. And they have a phenomenal battery life too. And I’m selling these for the low, low, price of… just kidding. I’m just here to share the unbiased truth.

Also, if you’d like to listen to a more in-depth discussion of CO testing, check out yesterday’s podcast on the topic: