Q&A: should the air exchanger be on or off during a radon test?

When conducting a short-term radon test, should the air exchanger be running or not? Great question. I’ve heard it argued both ways. If a home is designed to have an air exchanger running, I say it ought to run during the radon test.

Here’s my video discussion on the topic:

What’s an air exchanger and how does it affect radon?

An air exchanger, also known as a Heat Recovery Ventilator (HRV) or Energy Recovery Ventilator (ERV) is a big box in the furnace room that exchanges the air in a home. You’ll typically have four ducts on these systems; one brings stale air into the unit from the house, a second brings stale air from the unit to the outdoors, and the other two do the opposite. They bring fresh air into the unit from the outdoors and then bring fresh air from the unit into the home.

Inside of the air exchanger, you’ll find a heat exchanger to recoup some of the lost energy. While an air exchanger typically isn’t installed as a radon mitigation system, a running air exchanger will reduce radon levels in the home*, because stale indoor air is replaced with fresh outdoor air.

* This assumes the unit has been properly installed and properly maintained.

I attended a seminar on air exchangers and radon back in 2004 where the instructor explained that an air exchanger running at full speed, 100% of the time, has the potential to cut radon levels in half. I can’t remember how he arrived at this conclusion, but it sounded good to me at the time.

My own personal experiences have been in line with this information. I once accidentally tripped a basement GFCI receptacle about halfway through my home inspection, which caused the HRV to turn off for the last hour of the radon test, which caused a huge spike in radon levels for that last hour. Here’s the graph from that test: 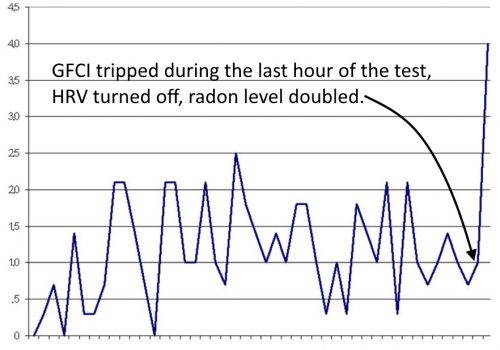 When Minnesota required licensing at the beginning of this year to test for radon, we adopted ANSI/AARST Protocol for Conducting Measurement of Radon and Radon Decay Products in Homes (ANSI/AARST MAH-2014). You can find that information under Minnesota Statute 4620.7500 B (1). Unfortunately, MAH-2014 isn’t a public document, but I’ll share with you what it says about running an air exchanger during a radon test… which is law in Minnesota.

“Energy recovery or Heat Recovering ventilators: Normal operation of permanently installed ventilation systems that bring outdoor air into the home (also called air-to-air heat exchangers) is permitted to continue during closed-building conditions so long as the system is regularly maintained and continuously operational.”

Of course, one might argue that “normal conditions” means the unit is unplugged and forgotten about, and the filters and screens are packed full of cottonwood and bugs. But I won’t say that. When my company inspects homes for new homeowners, we explain the importance of the operation and maintenance of air exchangers to our clients. We also take pictures and make recommendations for service when needed, which is most of the time.

What should the air exchanger be set to?

Different air exchangers have different settings to control how much they run during the day. Low, high, intermittent, 0%, 100%, and everything in the middle. 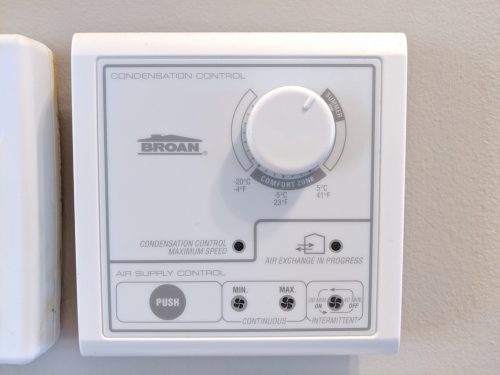 So how are you supposed to set your controller? I have no idea, and I wish you luck in trying to get a straight answer. I’ve asked that question to numerous building science professionals, and they all give the same answer: there’s no perfect answer. It depends on more factors than I could ever determine in the course of a home inspection, much less a radon test.

Watch out for dirty intakes! 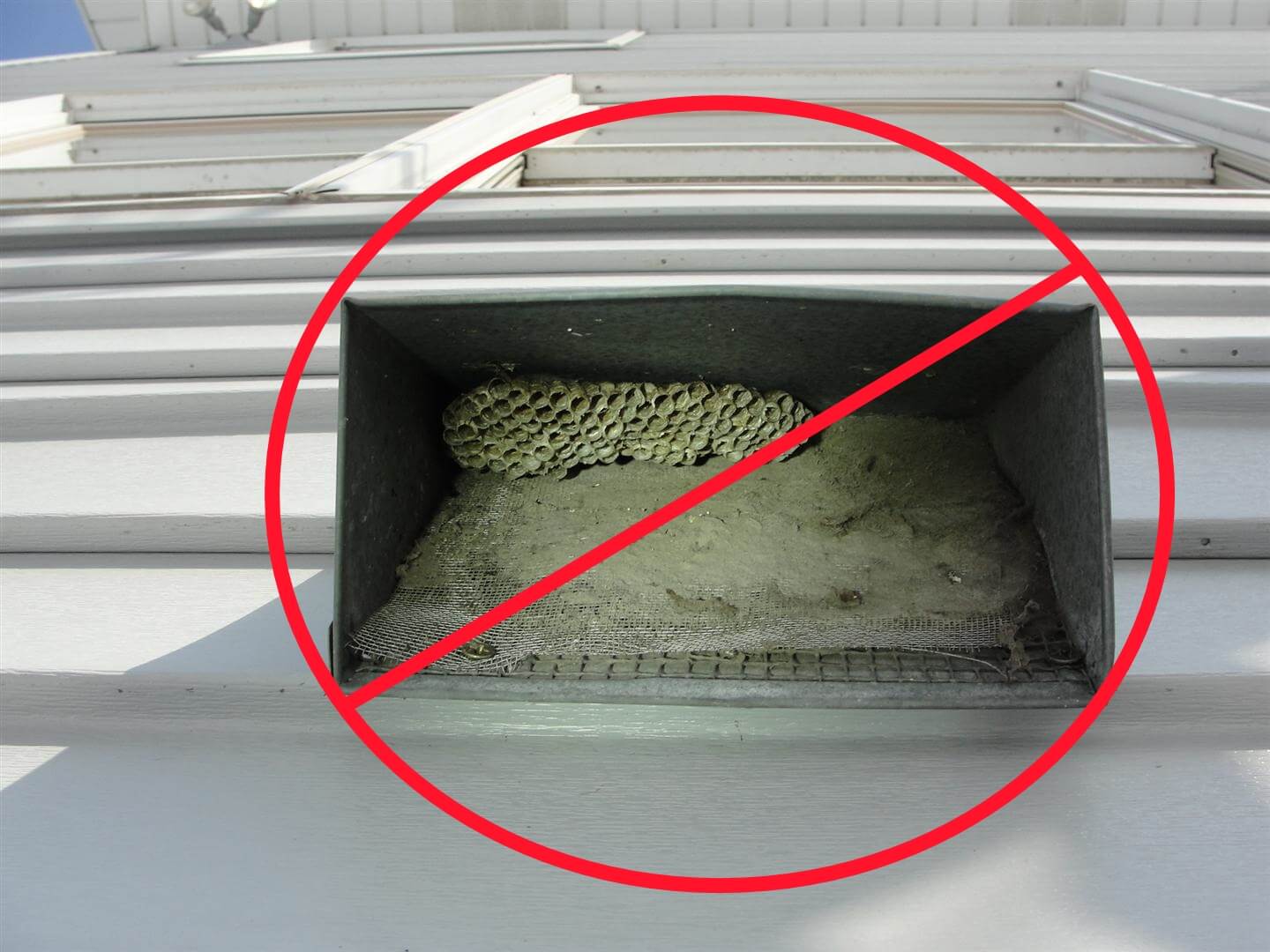 Some might argue that the radon technician should leave everything the way that they found it. Don’t turn the air exchanger on, and don’t clean the intake. That’s certainly an option, and this is the way that we used to do things at Structure Tech. As our company grew and the number of tests that we conducted increased, we received an increasing number of complaints from people who wanted free re-tests because the air exchanger wasn’t running or the intake was dirty.

Once we started turning on the air exchanger during our tests and cleaning off the intakes, all of these complaints disappeared. Also, I think we started delivering more accurate, consistent results once we started doing this. Again, I encourage anyone else who tests for radon to do the same.

3 responses to “Q&A: should the air exchanger be on or off during a radon test?”