Q&A: What happens when a permit isn’t pulled for electrical work?

A reader recently emailed this question:

“Our home was built in 1991. Probably around 1995 or so, we decided to finish off our basement. This required adding some new electrical wiring for outlets and light switches. I did not perform the electrical work myself, but it was done by someone I believe was an electrician’s apprentice at the time. There was no permit pulled nor was there an inspection done for the new wiring. I put up the drywall myself shortly after the wiring was installed. Now, 20 years or so later I see a sticker on my breaker box saying that an inspection needs to be performed before any new wiring is concealed. Will I have to tear my walls open when I go to sell my house?”

For my answer, I’ll assume the work was all done properly and to code at the time that it was installed. The potential roadblocks to selling a home with missing permits might be either during the buyers inspection or during a required city inspection.  I’ll discuss each one of those, starting with the situation that has the highest potential to cause problems.

If this home is in a city that requires what I consider to be a strict city inspection at the time of sale, the lack of permits for electrical work could be a big deal and you might have to tear your walls open when you go to sell your house. The two cities that come to mind are Saint Louis Park and Richfield.  If you’re in one of those two cities, work that is done without permits can turn into a big deal. In some situations, the city inspector might require permits to be pulled and the work exposed; in other situations, they might simply require certification from a 3rd party.

For most municipalities in the Twin Cities metro area, the required city point-of-sale inspections really don’t have much to do with permits, believe it or not. If they did, the point-of-sale inspections would be considered more of a code compliance inspection. For most of these cities, if no defects are identified during the inspection, nothing is required. In Saint Paul, for example, it’s simply an informational inspection that is done for prospective home buyers. The only thing Saint Paul makes people fix is the lack of a hardwired smoke alarm near the sleeping areas. 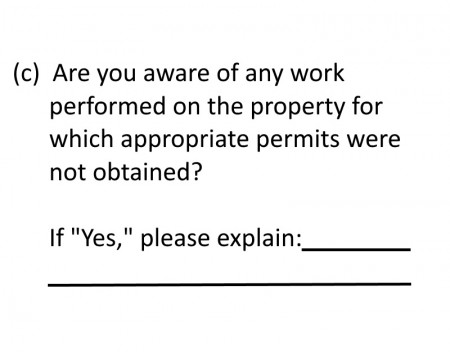 If I inspect a home with a newly finished basement but no permits have been pulled for the electrical work, does that go in my inspection report? No way. I’m not a code enforcement official. My job as a home inspector is not to research the history of a property to make sure the previous owners have pulled permits for everything they’ve ever done at the house. If someone could give me a convincing argument as to why I should, or how performing such a service might add value to my home inspection, I’d consider doing it. I won’t hold my breath, though.

My job as a home inspector is to inspect the home. Not research its history. Having said that, I do frequently look up the permit history for homes that I’m going to inspect, mostly to get a better idea of what my day is going to look like. If I see a long list of building inspection permits, I know there’s a better chance that the work performed was done properly. If no permits were pulled and a lot of work was performed at a home, I might look at the work with a slightly more critical eye, but the presence or absence of permits shouldn’t make much of a difference in how a home inspector writes his or her reports.

I keep a list of cities in the metro area that have permits available online: service providers .  If I’m missing any cities, please let me know. Sometimes I’ll simply use the permit history to pull a little Crocodile Dundee prank. I might use the permit history to tell my clients when an addition was added on, or when the roof was last replaced. I always come clean with where I obtained the information though, of course.

To summarize, there is usually no major consequence for the lack of building inspection permits, but not always. Requirements change from city to city. To get the most accurate answer, contact your local building inspections department to find out exactly what their policies are. In the future, remember to pull permits. It might cost just a little more up front, but it will be one less thing to lose sleep over.

3 responses to “Q&A: What happens when a permit isn’t pulled for electrical work?”