I’ve made more stupid mistakes than any other home inspector on the planet. At least, I’m pretty sure I have. As I sit here adding them up, I feel pretty confident with my claim to shame. When I talk to new home inspectors, I often say “Always do this” or “Never do that”. And then I follow these warnings with “ask me how I know.”

Today I’ll share some expensive, painful, and embarrassing lessons I’ve learned the hard way. You get to learn them the easy way.

By the way, I’ve heard you should never speak in absolutes, but here goes.

1. Always look inside the dishwasher before running it. I once started to run a dishwasher before looking through it, and I was very glad the listing agent was there. He stopped me and kindly removed the homeowners’ laptops from the top rack! That’s where they hid their laptops for showings. 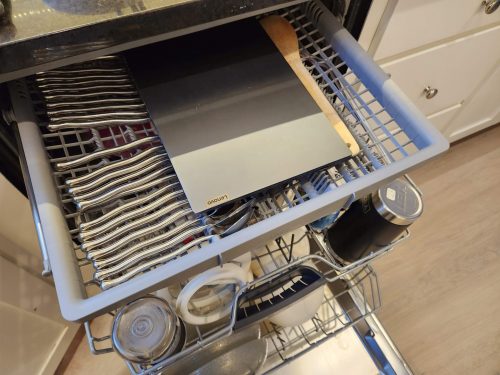 In the dishwasher. For showings.

2. Always look inside the oven before turning it on. Yep, I melted a piece of plastic cookware once. The kitchen smelled horrible after that.

3. Never leave keys on the counter. I managed to lock my keys AND my eKey inside a house once. That was after the inspection was over and everyone had already left, but still, very embarrassing and inconvenient. Now, I keep my keys in my pocket.

5. Never test outlets with a GFCI tester until the garage is open. I once used my GFCI outlet tester on an exterior outlet, and it tripped the GFCI outlet in the garage. That cut off power to the whole garage, which disabled the garage door opener… which was the only access to the garage. I won’t explain how I got back into to garage, but I did, and it required a second trip to the property.

6. Never test a GFCI outlet with an external tester. Instead, use the test button built into the outlet. 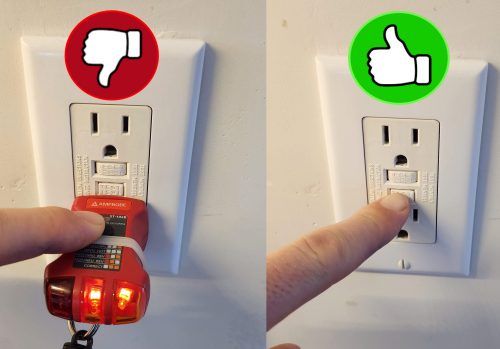 I once used my external tester on a GFCI outlet where the handy homeowner wired the basement themselves and had installed a half-dozen GFCI outlets in series on the same circuit. My tester tripped all six at the same time, and they were hidden behind cabinets and stored items, and could only be reset in a certain order. I spent about 45 minutes getting all of them reset.

7. Never walk on a wet wood roof. Even morning dew will make a wood roof dangerously slick. I remember confidently walking a dry wood roof in the morning, until I stepped on a shaded portion of the roof that was still damp. I went down very quickly, but I managed not to fall off the roof.

8. Never leapfrog a roof from a sloped roof. I almost fell off of a roof doing this when my ladder slipped down. I’ll never do that again.

9. Never put your ladder on an icy surface. Yep, I almost rode my ladder down to the ground when the feet slipped on ice. Luckily, I was stepping onto a flat roof, so I fell onto the roof and caught my ladder before it went down.

10. Never unlock an A-frame ladder on a slick surface. I always put a plastic dropcloth down below attic access panels to prevent insulation messes. At some point, I got in the habit of unlocking the top of my ladder on the way down. This works fine on carpet, but it was nearly a disaster when I tried this with my plastic dropcloth on hardwood flooring. I went straight down as my ladder did the splits. I got really lucky that day, though. I jumped off my ladder and caught it before doing a faceplant.

11. Always unlock exterior doors before going outside. I once used a second-floor balcony to set up my ladder to get on the roof, and I locked myself out of the house. My clients were inside the house, so I could have knocked, but I was too embarrassed at this stupid mistake, so I used my ladder to get down and walk back inside. I think they knew what I did, but they were gracious enough not to ask.

12. Never operate a radiator handle. I used to operate radiator handles when a radiator wouldn’t heat up… until I had one leak. I stayed at that house for two hours soaking up water with my towels until another inspector in my company brought me some magic plumbing tape to shore up the leak.

13. Never walk in the middle of attic cross-bracing. If you’re going to walk around in an attic, don’t step on the middle of cross bracing. You might step on a weak portion of wood with a knothole and have the wood break. That happened to me once, and I had a nasty fall inside the attic. I could have gone right through the ceiling, but I broke the fall when my shin landed on the bottom chord of a truss. So painful! My knee also put a hole in the kitchen ceiling. 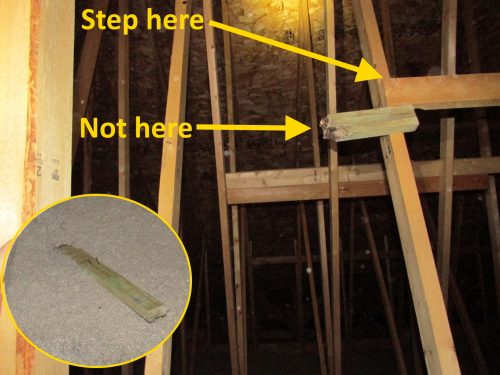 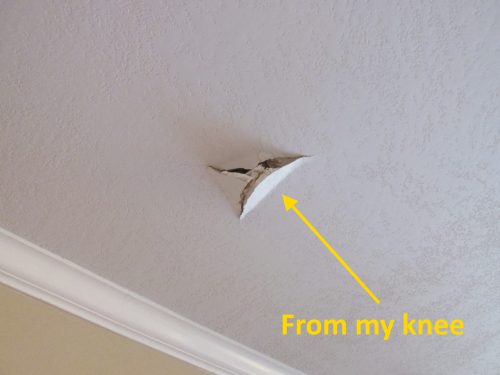 15. Never forget about a filling bathtub. I once did that and caused a huge mess inside the house. That was one of the lowest points in my career. You can read the full story here: Home inspection fail files: bathtub flood

16. Always make sure you’re at the right house. I’ve inspected the wrong house more than once. Check out my blog about this here: Home inspection fail files: wrong house

17. Never put an extension ladder on your vehicle without immediately tying it down. The first time I ever did a home inspection where I took my extension ladder off of my truck, I was still a noob. I didn’t want to take time away from my clients by having them watch me fasten my ladder to my truck, so I put the ladder on my truck’s rack and planned to tie it down after the inspection. As you might guess, I forgot all about it until I was driving down the road and nearly had my ladder fly off the truck. That could have turned really ugly. From that day forward, my ladder has never sat on my truck without being tied down.

18. Never set tools down out of site. If I’m going to set a tool down, it needs to be in a conspicuous place. Preferably in the middle of a walking path, so I don’t accidentally leave it at the house. My Little Giant ladder was the first tool I ever left at a house. I made the mistake of leaving it in the backyard. After that day, I always left my ladder in the front yard. I’ve also left my laptop, sunglasses, and countless small hand tools at home inspections.

19. Never remove a furnace blower fan and crawl inside the furnace to look for cracks in the heat exchanger. I got excited about doing this after attending a seminar for HVAC contractors, and I started pulling blower fans. It was really quite simple and easy, and I felt good about what I was doing. Until the day a furnace wouldn’t turn back on when I was done. It took me about an hour to figure out that the blower fan had a high-limit switch on the back side, and I had disconnected the switch while pulling out the blower fan.

A home inspector is there to give the furnace a visual inspection, not dismantle the thing and possibly break it.

20. Never operate a natural gas appliance if it’s connected to a propane source. I once unknowingly did this and just about melted my face off. I turned on the oven to heat it up, and shortly thereafter discovered it was set up for natural gas, not propane, which has about twice the energy as natural gas. As the oven was heating, it was also filling with unburned propane gas.

When I opened the door, the air-to-fuel mixture dramatically changed, igniting all of the unburned propane. That was a big explosion right in my face. When I realized the oven was connected to the wrong fuel source, I should have turned it off immediately and left the door closed.

I could keep going with these stories. I’ve done so many stupid things! But twenty seemed like a good number to stop at. The good news is that I’m no longer in the field, and the home inspectors on my team will never make half of these mistakes. They’re much better at following the rules than I ever was.

If you’re a home inspector reading this list, do you have any personal stories to share? Please put them in the chat so other people can benefit from them. Thanks!