One of my worst days as a home inspector was the day I flooded a second-floor bathtub. I found out about it when my client asked me why there was water dripping out of the basement ceiling. Yeah, that sucked.

Before I tell the story though, let me tell you why I’m telling you. I’ve told this story to everyone in my company who I’ve trained to be a home inspector. I tell this story because I think that stories are more powerful motivators than simply saying “always do this” or “never do that”. Here’s the video version:

I tell a lot of stories because I’ve made a lot of mistakes. Surely more mistakes than most other home inspectors. I’ve been warned about many of these mistakes by more experienced home inspectors, but I guess I’m just stubborn. I learn things better the hard way.

While I may be a second-generation home inspector, I also attended some formal home inspector training back in the day. I was taught that home inspectors should never test the overflow at the bathtub. I didn’t question why at the time, but I followed that advice and didn’t test overflows for a long time.

Eventually, I received a complaint from a client who said their bathtub overflow leaked the first time they used the tub, and it ruined their ceiling. I didn’t catch that leak because I followed what I was taught and didn’t test bathtub overflows… but that got me thinking. Why don’t I? What if I paid close attention to the overflow while testing it, and made sure that I didn’t ruin anything? This might be a good thing to do and could have saved one of my clients a ruined ceiling.

Side note: testing bathtub overflows is not required by the Standards of Practice put forth by the American Society of Home Inspectors, nor the International Association of Certified Home Inspectors. Just remember though, these standards are minimums.

There are two potential problems with testing a bathtub overflow. The first is that if the overflow leaks, you better be there to see it leak the second the leak starts, or you’re going to ruin something. Probably someone’s ceiling. I once made the mistake of leaving my client in charge of the overflow at a bathtub that was taking a particularly long time to fill. He got distracted on his phone and forgot to watch, and a ridiculous amount of water leaked out of the overflow before I came to check on things. Thankfully, it only leaked down into an unfinished basement.

The other potential problem is forgetting about the filling bathtub. Some bathtubs can take a really long time to fill, especially those two-person tubs. 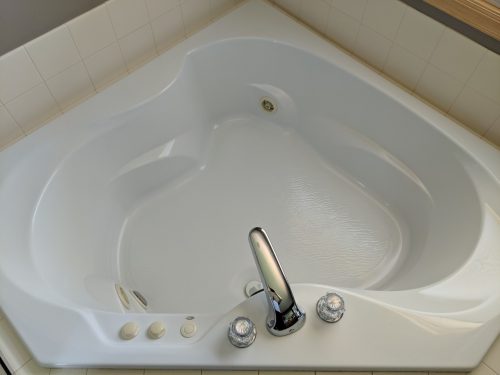 To be efficient, I typically start filling the tub and then I inspect everything else in the bathroom while the tub is filling. If the bathtub still hasn’t filled by the time I’m done in the bathroom, I’ll venture out to inspect other stuff and periodically check back on the tub. Once the water level gets close to the overflow, I hang out for a minute or two at the backside of the tub drain to make sure nothing is leaking. This works very well, provided I don’t forget.

The day I forgot

While training another home inspector many years ago, we inspected a home together with an especially large second-story bathtub. By the time we were finished inspecting the second floor, the bathtub was only about halfway full. To keep things moving along, we ventured down to the first floor, with the idea of coming back to check on the tub in about 10 minutes.

I completely spaced the filling bathtub and headed down to the basement. Water started leaking out of the basement ceiling shortly after that. When I saw the water, I knew immediately what had happened and I felt my face instantly flush. We cleaned things up as best we could, but there was a lot of water.

We paid for a water damage restoration company to make things right, but it was a huge hassle for the existing homeowners. This was seven years ago, but I can still feel my face turning red just writing about it today.

I don’t think I slept at all that night, and I seriously considered a different career. I kid you not. I got over it, but that shook my confidence for a long time.

How to not make the same mistake

If you’re a home inspector, there are three ways to make sure you don’t make the same mistake as me: 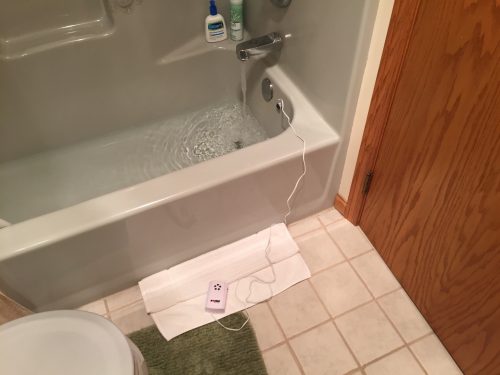 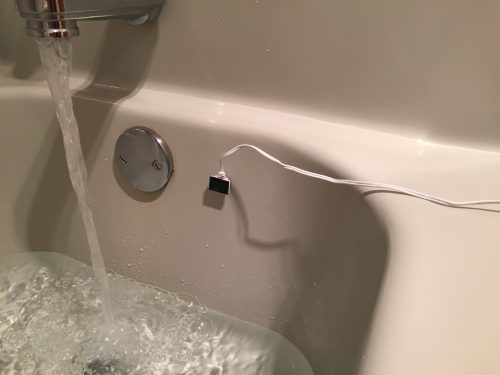 The water alarm pictured above is the Sonin Water Alarm Model 00800.

I suppose a fourth way would be to just not test the overflow. That’s a lot less work, but I think there’s value in doing this test.