For the last 800 years, building codes have allowed bathrooms to be built without exhaust fans.

Exhaust fans aren’t even a requirement here in Minnesota.  This is a great example of how building codes are only minimum standards.  I thought about this while doing a home inspection at a rental home in Minneapolis.   The outdoor temperature was about 45 degrees, and every single window in the home was covered with condensation, which was also dripping down the walls. 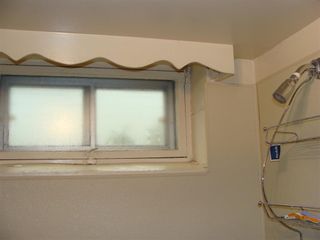 Oh, and there were no fans installed.

Bathrooms need exhaust fans to help prevent moisture problems, plain and simple.  When people take showers and baths, moisture gets pumped in to the air.  During the winter, this moisture condenses on windows and walls, and often makes it’s way in to the attic space through attic bypasses, where it will create frost.

Minnesota requires windows in bathrooms that provide a total glazed area of at least three square feet, and half of that must be openable (R303.3).  The exception to this rule comes when a bath fan is installed that will exhaust at least 50 cubic feet per minute, or a continuous exhaust system such as a Heat Recovery Ventilator that exhausts at least 20 cubic feet per minute.

The idea of someone actually opening a window on a cold winter day in Minnesota to help reduce moisture in the bathroom is pretty far fetched.   If you live in a house without an exhaust fan in a bathroom that gets used for showers or baths, you would do well to install one.  Your house will thank you for it.

If you’re going to install a fan, here are a few tips to make sure your house is happy with the fan.