Christmas Lights – What Would It Take To Start A Fire?

There are plenty of web sites out there offering all the same basic advice on Christmas light safety; don’t use frayed cords, don’t use damaged lights, blah blah blah.  I think most people know all this stuff.  I was curious what could really pose a threat if you’re using new lights and new extension cords, so I thought I’d do a little math and figure it out.

As they say on the greatest TV show ever,

As I see it, there are three main places for potential failure when installing Christmas lights – extension cords, power strips, and light cords.  I’m assuming the lights will be plugged in to a standard 15 amp outlet, and nothing else is running on that circuit (lighting, TVs, radial arm saws, etc.).

Lights: I took a brand new string of 150 lights that I had sitting in my garage and examined the fine print on the warning label.  As you can see, the lights draw .54 amps.  This means that you could theoretically have 27 sets of lights plugged in to one circuit, and you would use 14.58 amps – just below the tripping point of a standard 15 amp breaker.  Each string of lights has a 3 amp fuse built in to the plug, so you could potentially have five strings of lights plugged in to each other, end to end, to get 2.7 amps.  For the record though, I’ve always heard that you shouldn’t use more than three. 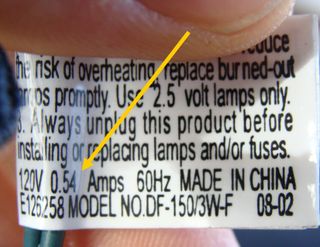 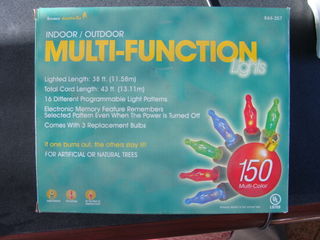 Side note:  If you noticed the date code on the lights “08-02”, you got me. These lights have been sitting in my garage for a long time. When stuff goes on clearance for 25 cents, I can’t help myself.

Side side note:  On that string of lights from 2002 there was one warning label.  Today, they have six warning labels.  I’m sure this is totally necessary…

Power Strip: I just took a look at a cheap power strip that I had lying around in my basement, and was surprised to see that the power strip was rated for 15 amps.  This means that the power strip should be able to deal with anything I plug in to it – if I overload it, the circuit breaker in my electric panel will trip. 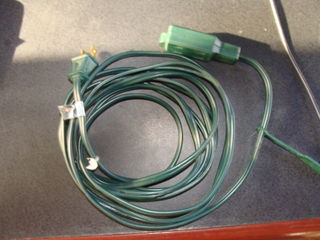