The times when electric baseboard heaters make the most sense to install are when someone wants to add heat to a room that won’t be used frequently, and they don’t need air conditioning.  One common place for Minneapolis and Saint Paul houses would be basement bedrooms that get added as guest bedrooms.  Another would be additions that just don’t stay as warm as they should.   I added a couple baseboard heaters to a sun room at my own house that doesn’t get very good air flow from the furnace, and I turn the heaters on when the temperature drops below zero outside.

The nice thing about electric baseboard heaters is that they’re easy to install, they don’t cost much, and there isn’t a lot that can go wrong with them.  The only failure I’ve found during home inspections is that the thermostats have gone bad, and this isn’t a difficult fix.  Most of the problems that I write up during home inspections deal with improper installations.  I’ve listed the two most common offenders below. 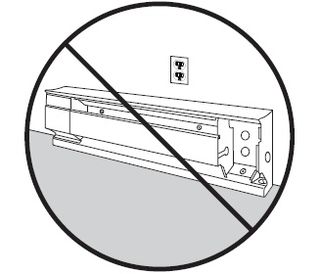 Improper Clearances Electric baseboard heaters require certain clearances above and in front of the units to anything combustible, such as drapes.  Again, the reason for this is to prevent a potential fire.   The clearance requirements vary – just check out the two diagrams below from two different manufacturers.  One says twelve inches, the other says six.

These clearance requirements shouldn’t be taken lightly.  The photo below came from a recent inspection where the drapes looked like they were about to burst in to flames. 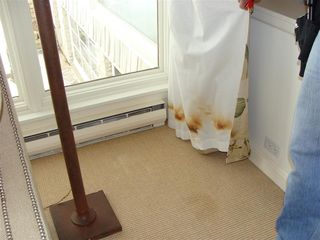