When a deck is attached to brick veneer, something probably went wrong.

Not necessarily, not 100% of the time, but probably. As home inspectors, this is definitely something that we at Structure Tech call attention to while inspecting decks. Most of the time, we recommend repair when we find this. Today I’ll explain why this is an issue and what can be done about it.

Oh, and while I’m discussing brick in this blog post, the same applies to masonry and stone veneer.

To understand why this is an issue, you have to understand how brick veneer is installed. For most homes in the Twin Cities, when you see what appears to be a brick wall, what you’re really seeing is brick veneer. A brick wall means that the wall is literally constructed out of bricks. Don’t get me wrong, we have plenty of those buildings in Minneapolis and Saint Paul, but we have way more wood-framed walls with brick veneer.

Brick veneer isn’t just thin little slices of bricks; it consists of real, full-sized bricks stacked on top of each other. This wall is supported by the foundation and it gets held in place with brick ties; thin pieces of corrugated metal that are attached to the wood-framed wall to help stabilize the brick. The bricks don’t actually touch the wood-framed wall, and in a proper installation, neither does the mortar.

Side note: for a fantastic, in-depth explanation of how mortar coming in contact with the wood-framed wall can lead to major water problems, check out Dr. Joseph Lstiburek’s article, Hockey Pucks and Hydrostatic Pressure.

To help prevent water intrusion problems, the brick veneer wall is separated from the wood-framed wall by a 1” air space. The diagram below from Tom Feiza illustrates this nicely: 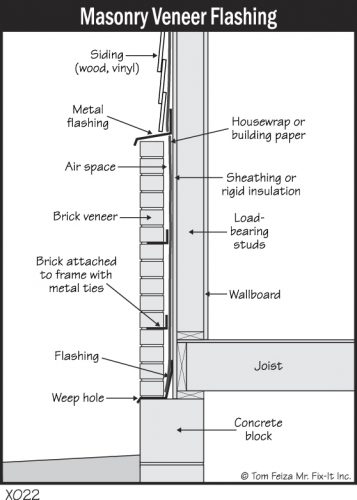 So now that we understand that the brick veneer floats from the actual structure of the home, how exactly is a deck supposed to be attached to a house with a brick veneer wall? You obviously can’t just put bolts into the brick; that could rip the brick wall right off the house. So, what about using lag screws that go through the bricks into the house’s rim joist? Unfortunately, that doesn’t work either. If the screws were properly tightened, the brick wall would be severely damaged, sucking the brick tight up against the wood-framed wall.

Not only that, but you’d now be creating a lever against the home, exerting a tremendous amount of pressure downward on the brick veneer, which is not structural. It’s just the wall covering.

The building code has traditionally been pretty quiet on deck requirements. You were supposed to read Chapter 5, Floors, in the International Residential Code (IRC) and use that information to understand the proper way to build a deck. The problem is that this was sorely lacking in specifics on how to build a deck.

Thankfully, the building code has become much more specific on deck construction. In 2015 the state of Minnesota adopted the 2012 IRC, which has a section dedicated just to decks (section 507). Under section 507.9.1.1, we find the following text: “Deck ledgers shall not be supported on stone or masonry veneer.” You might assume this means bolts going through the brick veneer into the structure would be acceptable, but that’s not the case.

To understand what this code section means, I rely on a fantastic guide to deck building for code acceptance, titled DCA-6, published by the American Wood Council. They make it very clear that decks aren’t supposed to be attached to or through brick veneer walls, and they even have a diagram depicting this: 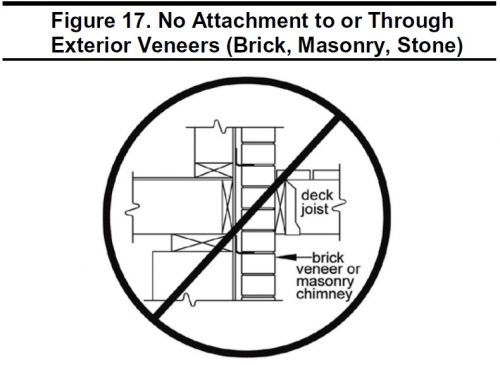 While previous versions of the building code didn’t address this deficiency, it doesn’t make this construction defect acceptable. A deficiency is a deficiency, whether the code has specifically addressed it or not.

There are surely thousands of decks built with this defect that were approved by building officials. Are these code-compliant decks? Yes. Does this make them proper and safe? Of course not. If this was a proper and safe construction method, the code wouldn’t prohibit this detail today.

In short, this is a code defect on new decks and a construction deficiency on all decks.

How to fix a deck attached through brick veneer

To the best of my knowledge, there are two ways of addressing this issue. The first is to make the deck free-standing. This requires adding a beam right next to the house to support this end of the deck. The trouble with this repair is that footings will need to be added next to the house, and they might not be easy to get right. Deck footings are supposed to be installed on undisturbed soil, but the soil right next to the home is ‘disturbed’.

The other way to address this is to install new brackets made specifically for this condition. This bracket is the Brick Veneer Ledger Connector (BVLZ), made by Simpson Strong-Tie. It basically consists of a huge metal plate, a pair of extra-long lag screws, and a big threaded post that’s called a compression strut.

The images below come directly from the installation manual. 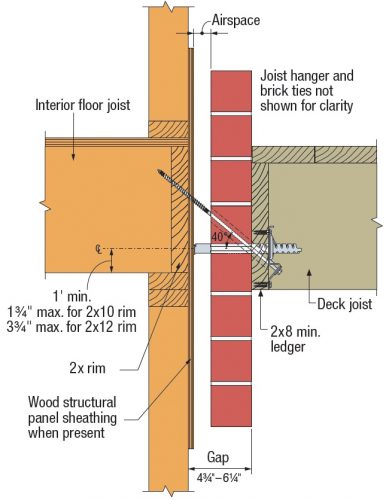 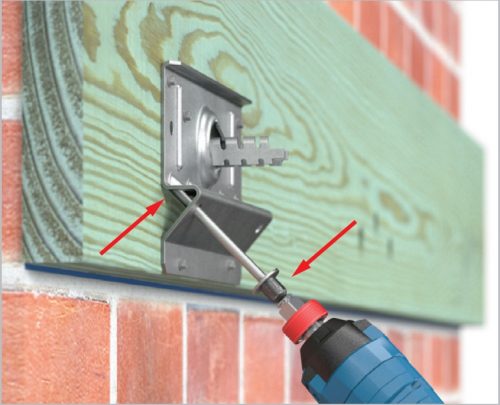 And here’s what you get with a single kit: 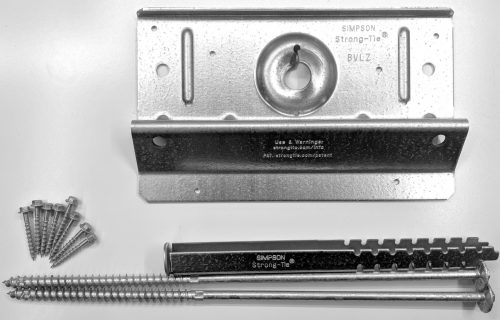 The compression strut holds the brick away from the home, while the lag screws support the deck ledgerboard.

This method of repair won’t work in every situation, but for homes that meet the minimum requirements, this would be a far simpler solution than making a deck freestanding. For more information on BVLZs, head on over to the Simpson Strong-Tie website.