The Problem with Attaching a Deck to a Cantilevered Floor

“Decks generally fail for one of two reasons.  The deck falls off the house, or the guard rails fall off the deck.”

That’s a quote from ASHI Certified Inspector John Bouldin, Ph.D, in the May issue of the ASHI Reporter.  I’ve already blogged about the importance of strong guardrails at decks, and I’ve blogged about the importance of properly attaching a deck to the house, but I need to revisit that last topic.  After attending an excellent seminar at Inspection World by John Bouldin on deck inspections, I have a little more information to share about one of the more common deck construction defects that home inspectors come across on a regular basis. 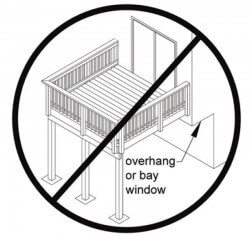 The image above comes from the Prescriptive Residential Wood Deck Construction Guide.  The problem with attaching a deck to a cantilevered floor is that there is nothing below the cantilever (overhang) to keep the rim joist at the house from pulling loose; there is no support below it.  John Bouldin had some excellent diagrams illustrating exactly why this is so important and exactly how this connection can fail, and was kind enough to share them with me.

This first diagram shows a traditional deck connection.  The deck joist is at the far right, which is connected to a metal joist hanger, which is nailed into the deck ledgerboard.  The deck ledgerboard is connected to the house with lag screws, which are attached to a 1″ engineered rim board.  The rim board is fully supported below by either a wall or a foundation.  That’s good stuff.  That’s how it should be done. 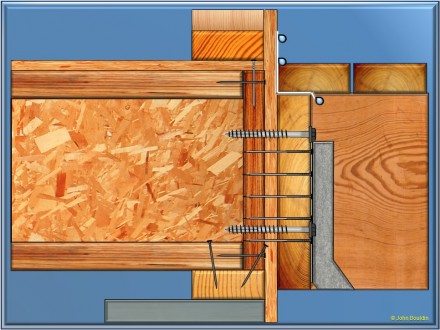 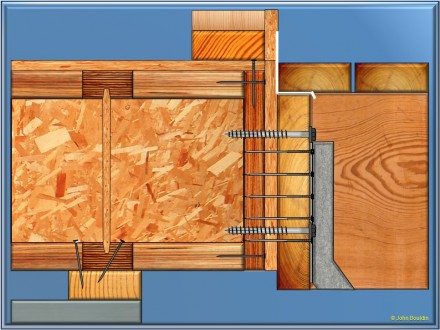 What happens when the rim board has no support?  It can fail.  The animation below shows how this can happen.

If there was support directly below the rim board for the house, this couldn’t happen.  That’s why attaching a deck to a cantilevered floor is generally a bad idea.

When a deck is built around a cantilevered section of the house, the most common way of supporting it at the house is to have the floor framing headered off, as shown in the diagram below.

If this is done, special measures must be taken to properly support this point load; it cannot be supported by the ledgerboard itself. The two photos below show an example of a deck that was headered off at the patio door, but all of the weight was concentrated on a tiny little piece of wood that you could hardly call a ledgerboard, and was simply nailed to the house.  I made a stink about this during my inspection. 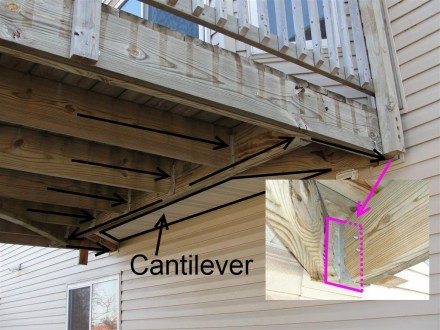 The fix for this particular deck was to have posts installed near the house.

*Of course, there are always exceptions; sometimes it might actually be acceptable to attach a deck to a cantilever. If someone went out of their way to make this connection more secure by installing upside-down joist hangers at the house and the framing consisted of all dimensional lumber, it would probably work fine. As a home inspector, I usually don’t get to see those details though. That’s why I raise concerns over these types of connections.