Boxelder Bugs: What should I do about them? 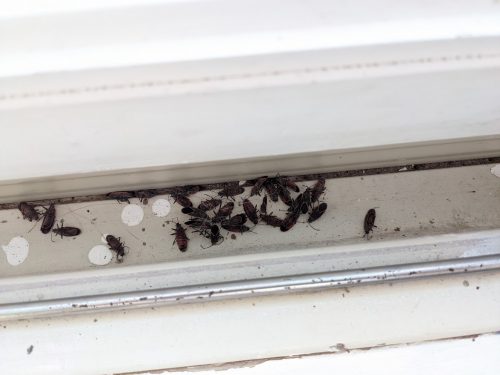 This week’s Q&A question comes from me, Reuben. That’s right, I have a problem with my house and the title of this blog post gives it away. I have boxelder bugs all over my house, and they’ve been here all winter. I almost swallowed one that snuck into my water bottle. This probably isn’t as bad as the plague of flies,  but it’s mildly annoying. So I asked my go-to pest guy, Scott Dorn at BOGO Pest Control, “What the heck is up with boxelder bugs this year?”

Weather conditions play the biggest role in how many insects are in the environment. We had a normal start to the spring in April. Right away the temperatures went to 90 degrees plus from the month of June on. It was a very hot, dry, and extended summer. Those are 3 keys for insects to have the perfect environment for their populations to explode.

I have been helping people in Minnesota since 2000. There have been 3 years where the box elder bugs went nuts – 2001, 2012, & 2021. 2021 was by far the worst I’ve ever seen these insects gather in significant numbers. There were homes where there were at least 10,000 bugs on the south and west walls. Typically, they will be seen in pockets of the Twin Cities, however, this past year they were EVERYWHERE! We also saw, for the first time, a tremendous uptick in the Brown Marmorated Stink Bug as well.

What can I do now? – The bugs are inside!

The short answer is you can only vacuum them up. Don’t treat them with an insecticide once they’ve entered the home. They primarily feed on aphids outside on plants, and they do not have food to eat inside your home. They will die naturally within a few days. I realize that answer is a bummer to hear if you have them inside now. The best thing to do is contact a qualified pest control expert and get on their list of clients to have a “Fall Prevention Treatment” applied to the exterior before these and other insects come to spend the next winter with you.

The solution to boxelder bugs is prevention.

Late September to October is the best time of year to prevent boxelder bugs from over-wintering inside your home. Boxelder bugs want to get inside the walls of our homes where it is warm enough to survive the harsh Minnesota winters. They use the house as a place to over-winter, in a hibernated state. They hide behind the siding and within the wall voids. Did you know they are attracted to some homes more than others? Yes, it’s true. They really love homes that reflect the UV light from the sun. They especially love homes that have large West-facing or East-facing walls that catch a lot of sunlight. The heat draws them toward the walls.

When it starts to get cooler at night, they huddle together in a ball to try and maintain their body heat. They are cold-blooded and rely on the warmth of the sun in order to move. If you go outside in the early morning, you can see them huddled up together in the rocks, mulch, or even on maple trees.

Do you know what makes them decide they need to find a place to over-winter? The simple answer is, ques from the environment. They are very sensitive to temperature changes. When it drops below 40 degrees and then climbs back to 65 degrees, they start showing up to find a place to hibernate.

4 responses to “Boxelder Bugs: What should I do about them?”