Most homes in Minneapolis and Saint Paul are old houses with masonry chimneys.  When these masonry chimneys go bad (and they all go bad) the repair can be very expensive.  If you call up a chimney contractor to see what can be done about it, they’ll tell you the chimney needs repair, just like an orthodontist will tell you your kid needs braces.  Repair is just one option. The other option is removal. 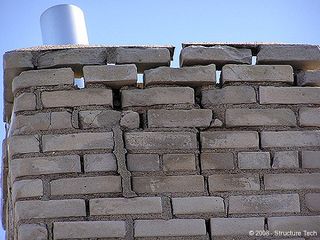 When chimneys are badly deteriorated, sometimes it just makes more sense to tear the chimney down below the roof line instead of repairing the section that sticks up above the roof.  The benefits of doing this are lower repair costs, less exterior maintenance, and less chance for leakage at the roof.  Chimneys are notorious for leaks, both through the top and at the roof flashing. 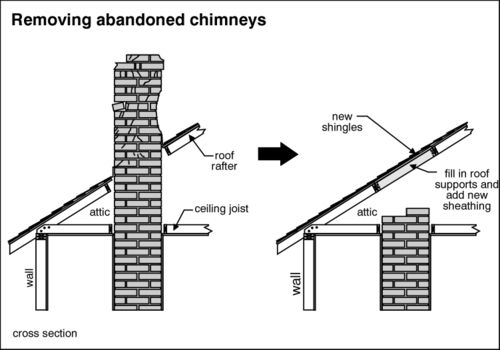 To remove the chimney below the roof line, the chimney must also be abandoned, or only be used to vent gas appliances that are connected to a metal flue liner.  If the chimney is completely abandoned, it’s a no-brainer; it’s not doing anything, just get rid of it.

If the chimney is being used to vent gas appliances such as a furnace /  water heater / boiler, that vent will still need to penetrate the roof to carry the exhaust gases to the exterior.  Just make sure that all of the gas appliances are properly connected to the vent! 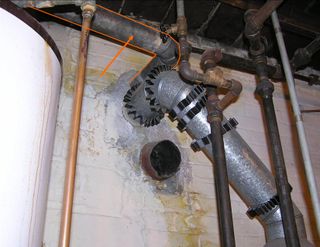 The diagram below shows the same thing – click for a bigger version. 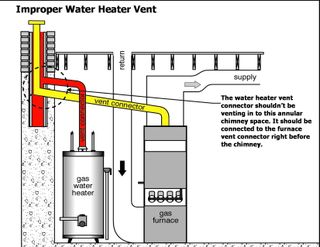 If you have an installation that looks like this, you should have it fixed, whether you plan on tearing down your chimney below the roof line or not.  Allowing the water heater to vent in to the annular space in the chimney will allow the corrosive exhaust gases to damage the chimney walls, and water heaters usually don’t draft properly when they’re installed this way… but I digress.  More on this topic another day.  Back to the chimney.