Artificial Firelogs – Bad For Your Fireplace? 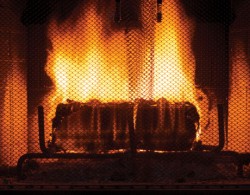 Artificial Firelogs are safer.  I grew up in a home with a large wood burning fireplace, and we used to have some rip-roaring fires in that thing.  We’d stack logs, kindling, and paper until the fireplace was filled, then we’d light the paper and stand back.  We often had to sit several feet away from the fireplace because it was so hot.  For anyone else who grew up in a home with a wood burning fireplace, I’m sure this sounds typical.

When artificial firelogs are used according to their instructions (one at a time, don’t break ’em apart), they don’t produce a whole lot of heat at one time; surely nowhere near the amount of heat that most wood fires produce.   I don’t have any statistics on the number of chimney fires started by properly used artificial firelogs… but I’m pretty sure the number would be close to zero.

Artifical Firelogs are easier.  Just stick it in the fireplace and light the package.  Done and done.  No stacking and storing of wood, no mess, no ‘building’ a fire… no comparison.

Artificial Firelogs are cheaper.  Unless you split your own logs and your time is worth nothing, artificial firelogs give you far more flame for your buck.

…yeah but still.  Even though artificial firelogs are cleaner, safer, cheaper, and easier than real wood fires, everyone still prefers wood fires.  Myself included.