One of the most common places to find plumbing leaks during home inspections is at the showers.  Steel showers always leak, glass doors frequently leak, and tiled shower floors will leak if they’re installed wrong.  Any time I inspect a home, I do my best to find these leaks.  Today I’ll share a few of my methods.

Ok, I can’t say metal showers always leak, but I seriously can’t remember ever inspecting a steel shower that didn’t leak.  All I need to do to make these leak is run the water.    The fix is to replace the shower. 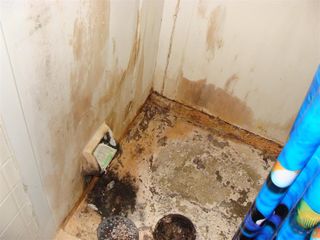 I’d estimate that about every other glass shower door leaks.  To find these leaks, I simply point the shower head at the corner of the wall and door intersection, turn the shower on, and let it go until it leaks.  If the door doesn’t leak right away, I leave the shower on for a few minutes, inspect a different room, and come back again.  If there is still no leakage, the shower passes.  If it leaks, the repair is usually as easy as adding some caulk inside the shower at the intersection between the wall and the base. 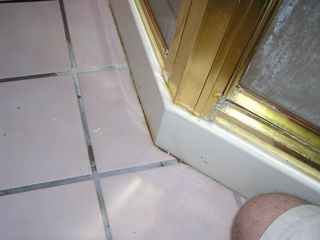 While a leaking glass door typically only allows some water to leak on to the bathroom floor, this can eventually lead to major water damage at the sub-floor if the shower base or tub isn’t properly caulked at the floor.  The photos below illustrate this quite clearly, I hope.  To help prevent damage here, always make sure that the tub or shower is properly caulked at the floor. 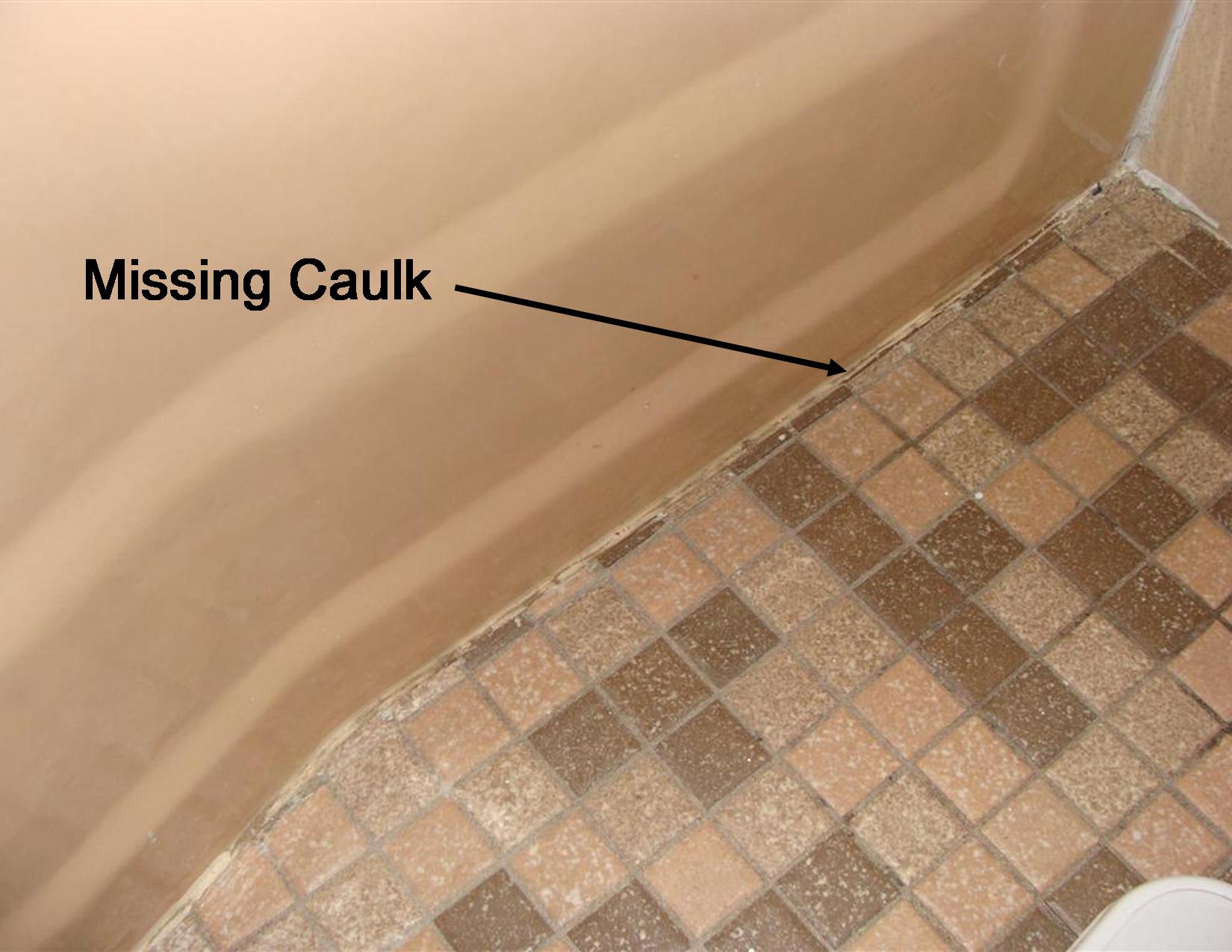 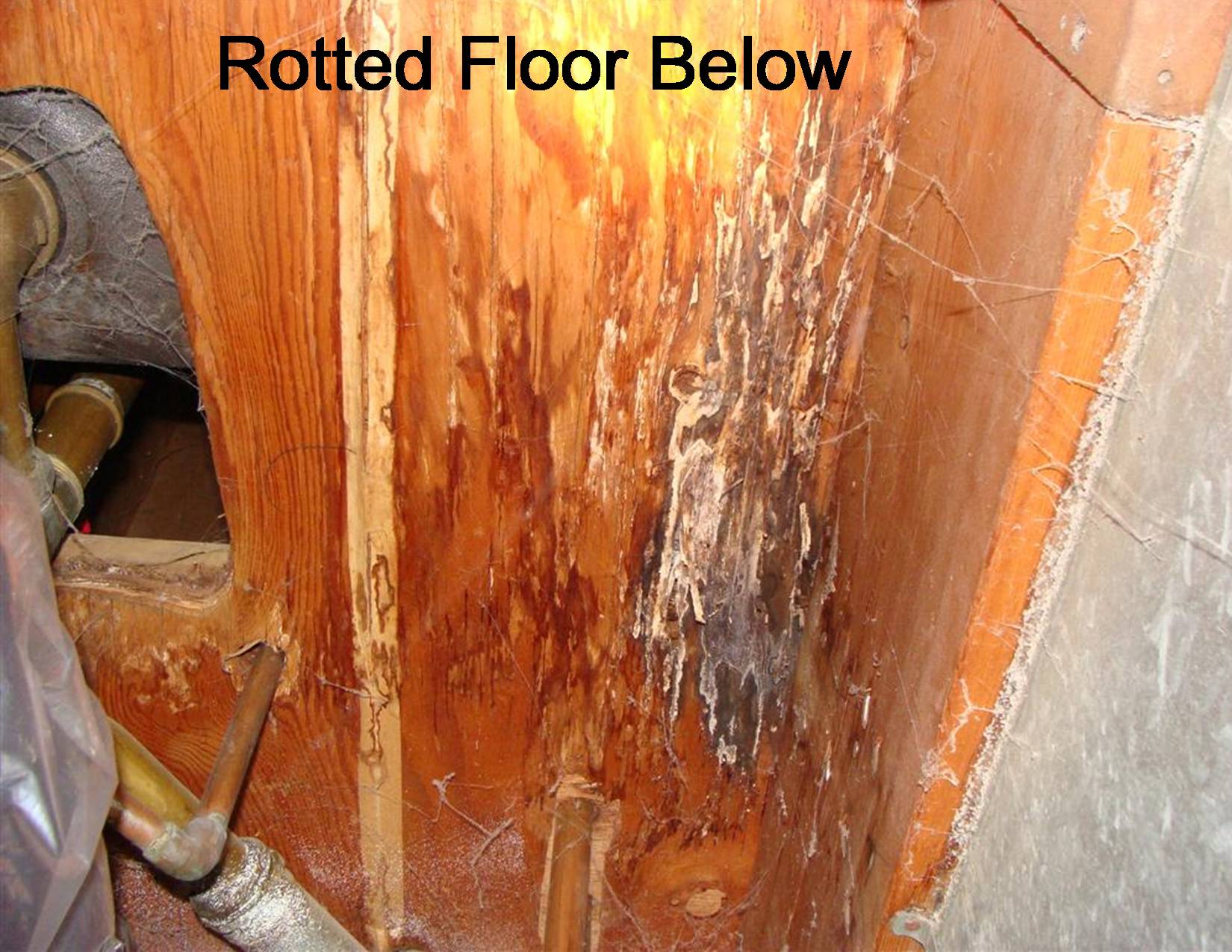 Tiled shower floors look great, but they often leak.  These leaks sometimes take a long time to show up because the leaking is usually very minor and very slow.  Just taking a shower once a day typically isn’t enough for the water damage to be seen on the ceiling below, but that doesn’t mean it isn’t happening.

I look for caulked joints in the floor, cracks in the floor, and patching at the ceiling below.  I also use a rubber shower dam to fill the shower with about 2″ of water.  I leave the water slowly running in the shower and I don’t worry about it overflowing – that’s the beauty of using a dam.  I’ve found a lot of leaking showers using this method.  The leaks usually take a while to show up on the ceiling below, but if a tiled shower is leaking, it’s an important thing to know about. 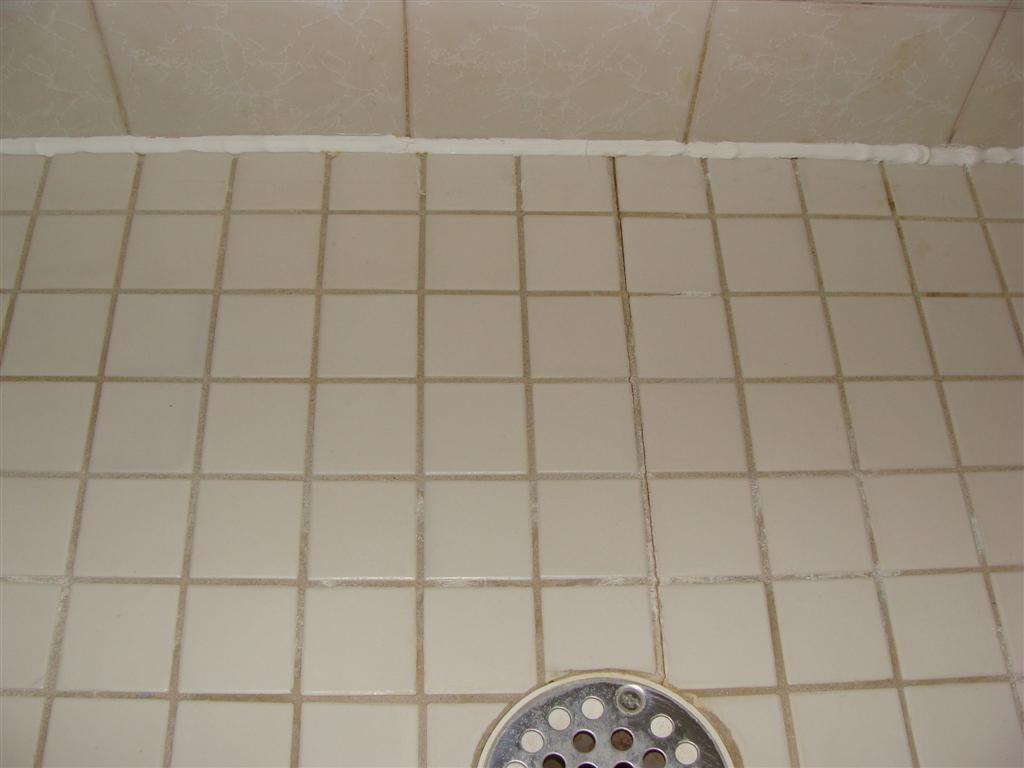 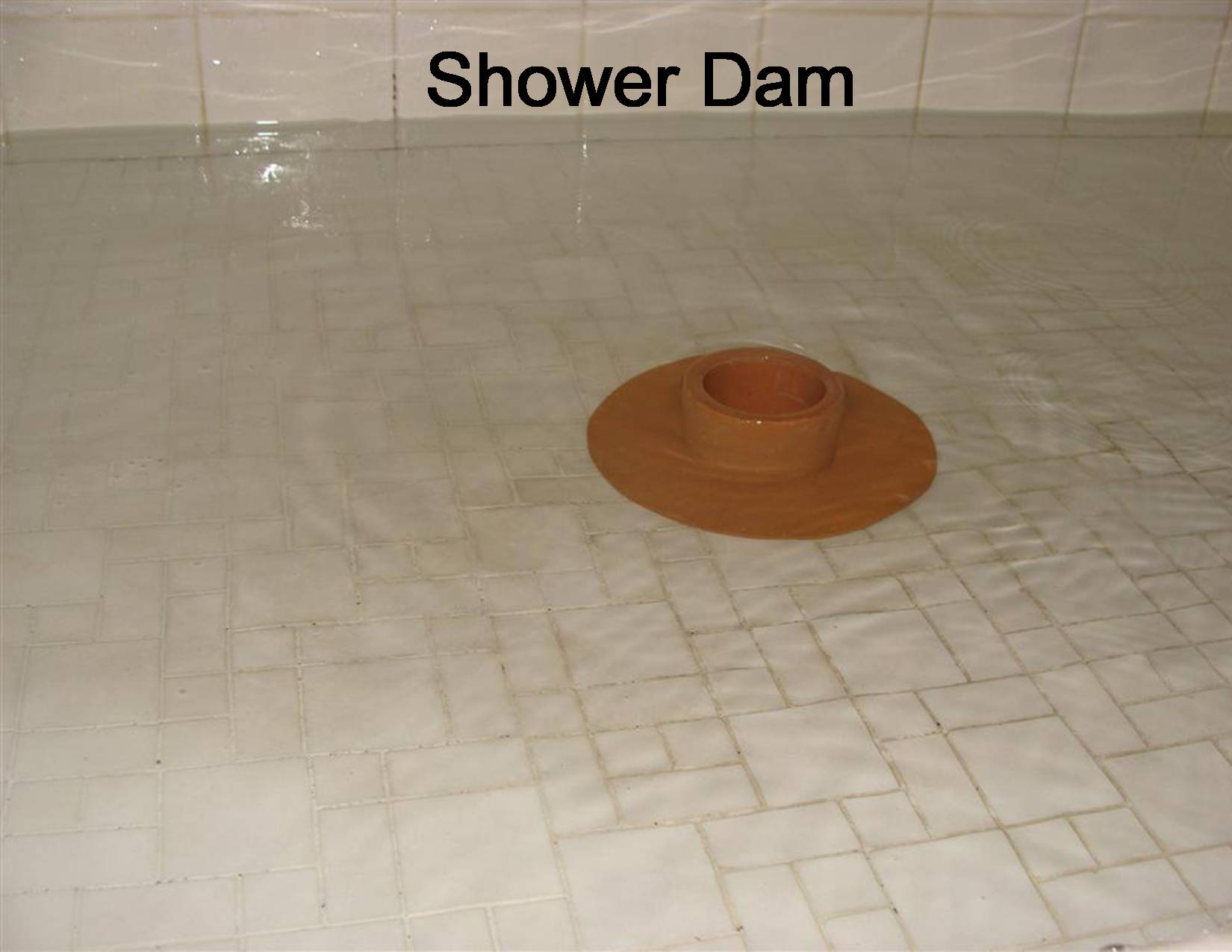 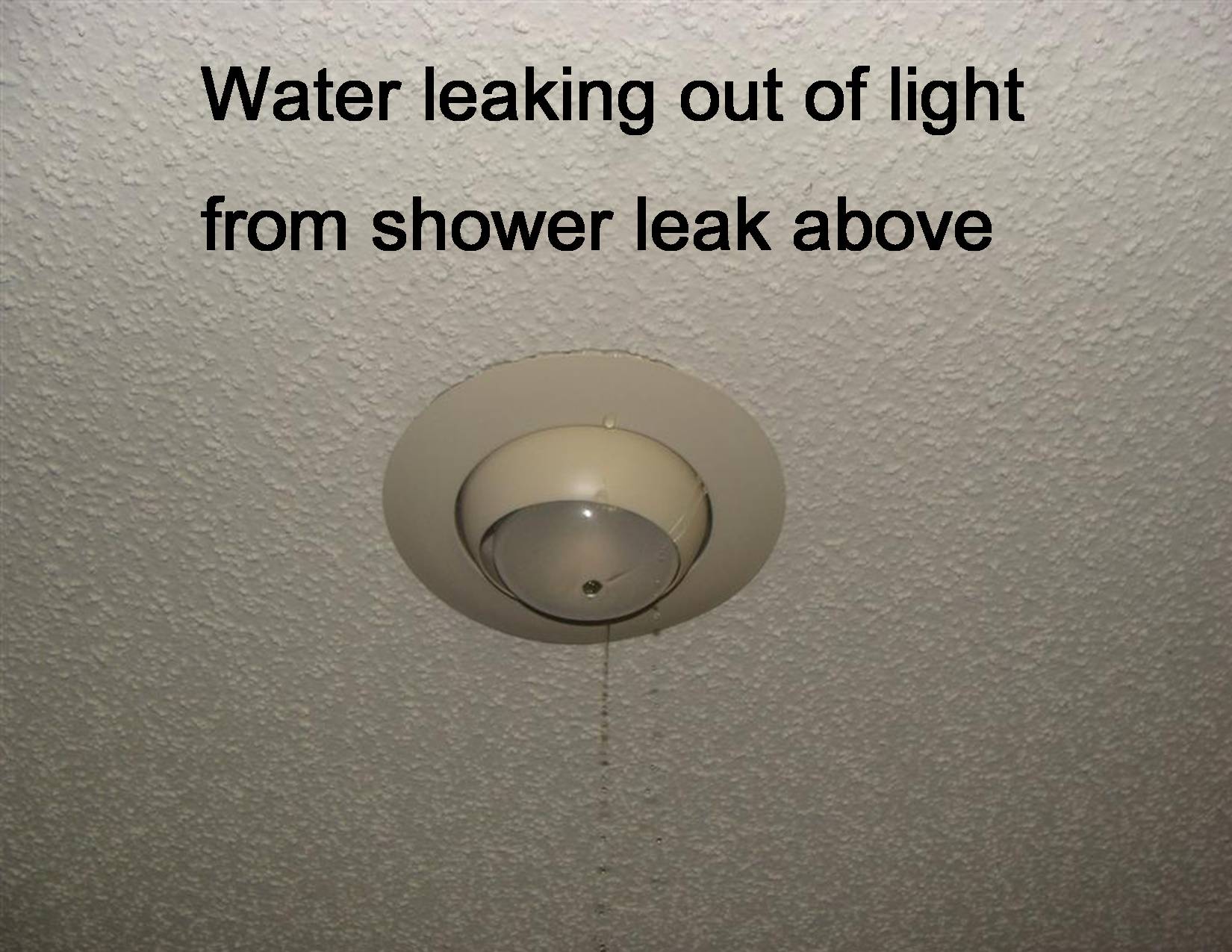 The repair for a leaking tiled shower is to tear it out and start over.  Caulking any cracked areas in the tile is not an acceptable repair.

Shower drains occasionally leak at the connection between the drain and the tub or shower.  I find these leaks by carefully examining the area below the drain for any drips after I’ve run the water.   If it’s a bath tub, I fill it up to the overflow to really build up the water pressure; if someone is going to find the leak, I want it to be me. 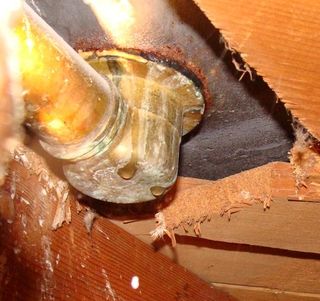 Plastic shower drains ocassionally leak, and these leaks are extremely difficult to find during the course of a home inspection.  A friend of mine had a big stain on his ceiling below the shower, so we spent a couple hours trying to figure out where the leak was coming from, but we couldn’t make it leak.  Two days later, the stain got bigger.  It turned out that the drain was leaking only when he was actually standing in the shower, which caused the shower floor to bow just enough to make the drain connection leak.  I’ve never found a leak like this during the course of a home inspection.

Here’s a quick video of a rotted subfloor in a shower.  This shower had been leaking for a long time.  (right, Milind?)