I’ve taken many building code classes that were taught by the Building Official for the City of New Hope, Roger Axel. He’s a fantastic teacher. In his classes, I remember him repeatedly telling us to take off the blinders; what he meant by this was to not miss the forest for the trees. Sure, the deck ledgerboard has lag screws every six inches… but if the house was built with floor trusses, what are those lag screws going into? The wall sheathing? Look at the big picture, keep an open mind, don’t make assumptions, question everything. 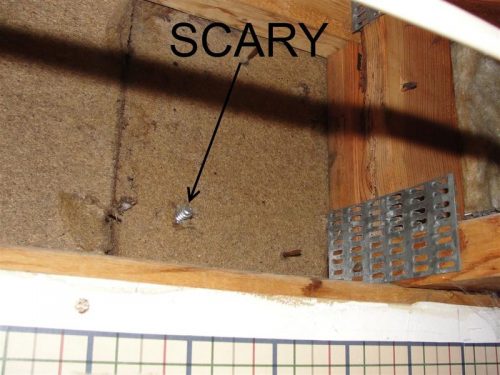 Here’s a common scenario: I inspect a home for a buyer, and I come up with a list of electrical defects that are potential fire hazards. The buyer asks the seller to fix the stuff. Two days later the seller calls me, and she’s not happy.

Seller: “Hello Mr. Saltzman, you told my buyer a lot of bad information about my electric service.  I just had the Minnesota State Electrical Inspector out at my house last year, and they said everything was fine.”

Me: “Why did you have the state inspector at your house?”

Seller:  “I had my basement finished off, and they approved all the work. They wouldn’t have signed off if there were problems!”

On one hand, the electrical inspector may not have the right to require repair. If the municipal inspector is being hired to inspect the work that’s being done, they have an obligation to the homeowner to approve the work if it’s done properly, regardless of whatever else is going on at the house. If an owner is replacing an electric panel, should the municipal inspector go through the entire house to make sure all the lights are wired properly, all the outlets grounded, and GFCI outlets installed to today’s current code? Probably not.

On the other hand, does the inspector have a moral obligation to report the other defects they see? Maybe, but these defects shouldn’t have any effect on the permit approval process. If a municipal inspections department begins requiring repair of defects that aren’t directly related to the work being done, what are homeowners and contractors going to start doing? They might decide that it’s too much of a hassle to pull permits because some ‘a-hole inspector’ is going to start poking around for other problems as soon as he or she sets foot in the house.

Municipal inspectors need to have a delicate balance of what they look at and enforce; if they miss defects, they get labeled incompetent or lazy. If they start requiring more repairs than what they’re hired to look at, people think they’re being jerks, and people stop pulling permits. To a certain degree, municipal inspectors have to wear blinders.  I don’t envy the job of the municipal inspector.

If a municipal inspector signs off on a permit, they’re signing off on the work that’s being done; not the entire house.