Why are people scared of fuses?  Many people think that fuses are unsafe, but this couldn’t be further from the truth.  A properly installed fuse is just as safe as a circuit breaker, but there are many reasons why fused homes can have problems, and I’ll discuss a few of the most common problems.

To start, how can I say that a properly installed fuse is as safe as a circuit breaker?  A fuse will only handle the amount of amperage that it is rated for.  If a fuse is rated for 15 amps and more than 15 amps passes through the fuse, a thin strip of carefully calibrated metal will vaporize, which opens the circuit (in other words, kills the power).  A fuse will never allow more current to pass through than what it is rated for.  Circuit breakers are designed to trip when too much current passes through for too long a period of time.  Circuit breakers can be reset after they trip, which is a huge advantage over fuses, but they don’t add any level of safety.

Today, circuit breakers are used in homes instead of fuses.  The main reason is because a circuit breaker can be re-used.  Once a fuse blows, it has to be replaced. Old electric services will have fuses, and old electric services can have problems.  This is why people get scared of fuses.  A typical 60 amp fuse box might have one 240 volt circuit for an air conditioner or electric range, plus four more fuses for the rest of the wiring in the home.  Compared to the minimum number of circuits required today, this is totally insufficient.

In a new home, a kitchen will typically have one circuit for the dishwasher, one for the disposer, two for the countertop outlets, one for the lights, and another for the microwave and fridge.  This is a minimal installation, and many electricians will also put the fridge on its own circuit, and have another 240-volt circuit for an electric range.  This adds up to nine spaces in an electric panel.  The example I gave for an old 60 amp panel only has six spaces available for the entire house.

With today’s demand for electricity, old services are usually inadequate.  To make up for this, occupants will often use fuses that are too large for the wires, which will keep fuses from blowing, but also creates a fire hazard.  The photo below shows a wire that is only rated for 15 amps connected to a 30 amp fuse. 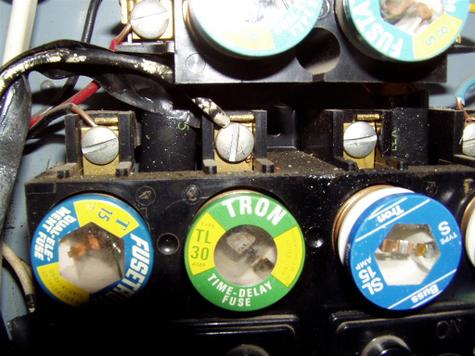 Oftentimes, several wires will be connected to a single fuse lug, but each fuse is supposed to have one wire.  This is often referred to as double tapping, or double lugging.  This is a common defect for both fuse panels and breaker panels in Minneapolis and Saint Paul, and the repair is usually quite simple at a breaker panel, but not so for an overloaded fuse panel.  When a fuse panel is overloaded, it probably needs to be replaced. 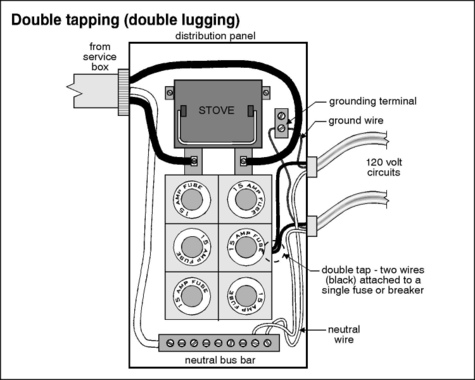 Because of all the problems that can be found with fuse panels, insurance companies will often charge a premium for homes with fused services, or they’ll refuse to insure the home.  If you’re buying a home with a fused electric service, you would do well to have the service upgraded.    A typical service upgrade from a fuse panel to a breaker panel will be in the $1500 – $2000 range.  The price will continue to go up if new circuits are added to the home, or other wiring upgrades are performed.

The bottom line is that there is nothing inherently wrong with fuses, but most old fuse panels have enough problems to warrant replacement.