A few ‘Green’ buzzwords I’ve been hearing about lately are ‘Vampire Loads’, ‘Vampire Power’ or ‘Phantom Power’. They all mean the same thing. If you haven’t heard about these yet, just wait, you will. Wikipedia defines these terms as “the electric power consumed by electronic appliances while they are switched off or in a standby mode.” Simply put, this is power that electronic devices use while they’re not really in use, such as cell phone charges, printers, computers, etc. I have a tendency to question the validity of these types of things when I hear them, and I really started to question this when my wife started unplugging her cell phone charger when not in use to save electricity.

After I saw a television commercial sponsored by GE Electric where a guy unplugged his toaster to prevent vampire drains, I was fed up because I didn’t believe it for a second.

I knew that computers, monitors, and printers use a fair amount of electricity, but I was skeptical about toasters and cell phone chargers.  I decided to take my electrical tester around my house to measure how much electricity actually gets used by all these so-called ‘Vampires’. I threw in a 60 watt light bulb for comparison. I used an electrical tester that measures as little as 1.1 Watts. Here are the results: 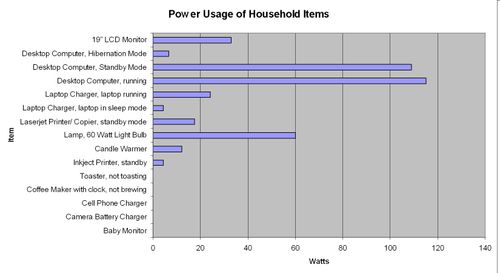 The last items on the list used less than 1.1 watts. Any surprises? I was right about the toaster not using anything, but I was surprised at the amount of electricity saved by putting my computer in standby mode. This only saved a couple watts! After doing this test, I’m going to leave my cell phone charger plugged in, and I’m going to start putting my computer in to hibernation mode when I’m not using it.