“You just cost me a lot of money!”

Do you remember the telephone game? You’d get a bunch of kids in a circle, and the first kid would whisper a phrase in the next kids ear, and then that kid would whisper it to the next, and so on. Once the last person heard the message, they’d say aloud what they heard, and everyone would have a great laugh because the message was never even close to what the first person said.

Some time ago, I inspected a home with a 23-year-old Trane furnace where I was able to remove the back panel to get a clear look at the heat exchanger. Many older Trane and GE furnaces have these removable panels which makes inspecting the heat exchanger a piece of cake. I found obvious cracks in every single port of the heat exchanger, so I told my client to replace the furnace, and I even included photos of the cracked heat exchanger in my report. This should have been a no-brainer furnace replacement, but it didn’t work out that way. 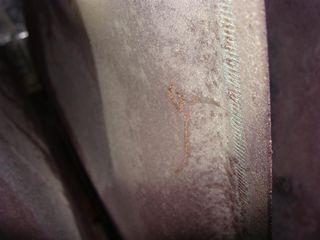 Two days later I received this voicemail – the choppy parts are where I removed the agent’s name, house address, and the name of the HVAC contractor:

Click the video clip below to listen to that voicemail:

I think I had steam coming out of my ears after I listened to that message. Who told the owner to hire a heating contractor to “inspect my comments”? Certainly not me. Weren’t my photos of the cracked heat exchanger good enough? Above all, why would a contractor say the furnace was perfectly fine? I don’t know of any contractor that would use language like that about a 23-year-old furnace. The best thing I’ve ever heard a heating contractor say about a 23-year-old furnace is “I can’t find any problems with it.” This didn’t make any sense.

I had to get to the bottom of this, so I waited several hours until I was calm enough to speak in a civil manner, and I finally called the listing agent back. I got the name of the heating contractor and called him to chat about the furnace. The contractor sheepishly admitted that he wasn’t aware that this furnace had a removable back panel, so he never found the cracks.

I asked the contractor why he would have said that there were “no cracks at all” and that there was “nothing wrong with the furnace, at all”. Can you guess what he told me? He said he never said that. The contractor told the homeowner that the furnace was heavily rusted, 23 years old, and most likely did have a cracked heat exchanger, but he couldn’t find any cracks.

If you want the full story, sometimes you have to just go to the source. To this day, I’d still love to know exactly what that homeowner told his agent.