Here’s how the story goes: a homeowner contacts a plumber to have a new faucet installed, which they’ve already picked out – a Delta Addison faucet they saw at Home Depot’s web site for $349.  The plumber will install the faucet, but won’t give any type of warranty on the faucet, because it’s an inferior product compared to the faucet the plumber would get from their plumbing supply store.  If the plumber provides the faucet, it will cost a lot more money – the list price at Delta’s web site for the Addison faucet is $514.45. 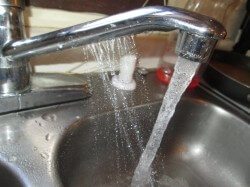 I’ve heard this repeated so many times, from so many sources, that I decided to do a little calling around.  I called and spoke with reps from Kohler, Delta, Moen, American Standard, and Price Pfister.  They all flat out denied this claim.  They say there is no difference in faucets that go to different retailers.  They’re all the same.

I suppose it’s possible that all of the manufacturers were lying to me, or that the reps I spoke with don’t actually know what their talking about… but how likely would that be?

In the plumber’s defense

So why would a plumber claim that the faucets at plumbing supply stores are superior if the manufacturers don’t agree?  I’m not sure.  Maybe it used to be that way.

At any rate, I have no problem with a plumber giving a warranty on the faucet they get from a supply store, but not a big box retailer.  If a faucet goes bad and it came from a plumbing supply store, the plumber can bring the bad faucet in and swap it out for another, or easily obtain replacement parts if something goes bad.  If the faucet came from a big box retailer, not so.  While many faucet manufacturers have liberal lifetime warranties on their faucets, a leaking faucet can mean waiting around for the manufacturer to ship a replacement piece.  If the kitchen faucet is leaking, who can wait around for replacement parts to be shipped?

Also, when a faucet comes from a plumbing supply store, the plumber has presumably marked up the price of the faucet.  This markup helps to cover the cost of a repair visit.  It’s essentially the price the homeowner pays for a warranty.