If you plan to buy a newer stucco home in Minnesota, heads up: stucco homes in Minnesota built since the late 80?s or so have had a nasty history of catastrophic failures.  I decided to write about this after doing a home inspection in Blaine where the entire development was having the stucco torn off all the homes and James Hardie siding was being installed instead.   The average cost per home exceeded $100k. 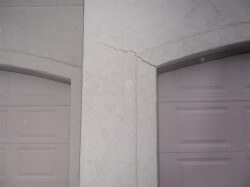 Newer stucco homes are more likely to have moisture instrusion problems than other types of homes, and the damage is usually far more serious. The City of Woodbury has an excellent position paper about https://structuretech.com/wp-content/uploads/2021/04/StuccoPositionPaper.pdf, which should be required reading for anyone buying a stucco home built during this time period.  In many cases, there are no visible signs of moisture instrusion.  My advice to anyone buying a newer stucco home in Minnesota is to have invasive moisture testing performed, which can be done from the interior or exterior.

Exterior testing of stucco is done by drilling holes in the stucco at suspect locations, sticking a moisture probe in to the wall, and measuring the moisture content of the wood or wall sheathing with a special moisture testing device, such as a Delmhorst Moisture Meter.

Interior testing is done by drilling holes in the interior walls, and then sticking a long moisture probe through the wall to the exterior wall sheathing to take a moisture reading.  As long as the person doing the testing is good at it, the results that come from invasive moisture testing on stucco homes are highly reliable.

To gather information for this blog, I spoke with moisture testing experts from three of the larger stucco testing firms in the Twin Cities: Barry Eliason of Private Eye Moisture Testing, Wayne Shellabarger of Acuity Engineers, Inc., and Alan Powell of Certified Moisture Testing.  I asked them about their preferred testing methods, and asked them to explain why.  All three can provide both interior and exterior testing, but they each have their own preferences.

Whether holes are drilled in walls from the exterior or interior, the walls won’t look exactly the same when the work is done.  The person drilling holes in stucco will come equipped with a wide range of sealants to fill the holes when they’re done, and the resulting 1/4? holes are barely noticeable once filled with with matching caulk.  For interior testing, the holes aren’t as easy to hide or patch.  If holes are drilled in drywall, they’ll obviously need to be patched and painted over again.

Cosmetically, exterior testing is certainly preferred, as you really need to walk around the exterior of the house and carefully look for the test locations; they’re not obvious.  The photos below should help to illustrate just how inconspicuous the holes from exterior testing are.  Click on any of the photos for a larger version.

Interior vs. Exterior – Holes In The Stucco

Wayne Shellabarger, who is opposed to exterior testing, said that he has found holes in the drainage planes that were never properly sealed up after invasive testing was performed.  I asked him if there was water damage caused by the breaks in these drainage planes; the answer was no.

After over a decade of invasive testing and having tested thousands of homes, none of the companies that perform exterior testing have had a single reported problem with this testing method.

The biggest problem that Barry Eliason expressed about interior testing is that there are oftentimes interior wall surfaces that make testing impossible in some locations.  There are several places where holes can’t be drilled, such as through bath tubs, shower walls, tiled walls, and cabinets just to name a few.

Alan Powell also expressed concerns about being able to test in the proper places on interior walls; windows usually leak in the corners, and to properly test the right areas, the wall sheathing directly behind the walls studs is the most critical area to test.  This area can’t be accessed from the interior walls. 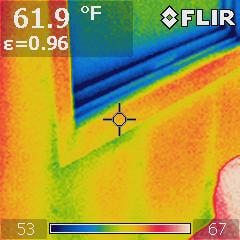 Some companies in Minnesota offer infrared scans on stucco houses as an attractive non-invasive alternative to traditional moisture testing.  These companies claim to have had good luck using infrared cameras to find moisture behind stucco walls, but I say they don’t know what they’re missing.

All three testing companies that I interviewed said the same thing about infrared inspections on stucco homes: they’re unreliable.  Each company shared the exact same experience with me.  They were excited when infrared cameras came onto the market, they purchased $10k – $15k infrared cameras, they went through extensive training on the use of IR cameras, and then they began using IR cameras on houses before performing invasive testing.

After comparing the results over and over again, they all said that IR cameras are a completely unreliable way of finding moisture behind stucco.  Wayne Shellabarger’s web site says they use infrared cameras as a starting point before performing invasive testing, but he told me they no longer even offer that service because it has proven to be a waste of time.

I have yet to hear from a single home inspector, anywhere in the country, who has performed infrared scans on houses, compared those results to an invasive moisture test performed at the same time, and can still claim that infrared scans on stucco houses are reliable.  Infrared cameras can only identify differences in temperature; they don’t identify the presence of moisture.  We offer infrared inspections, but not as a way to find moisture in stucco buildings.

Here in Minnesota, performing an invasive test on stucco is the only way to know what’s happening behind the stucco.  Problems can’t be positively identified using visual inspections, surface scanners, or infrared cameras.  Visual inspections will often provide clues that a problem exists, and so will infrared scans, but that’s all they can do.  Many times, stucco homes will have serious problems without any visual or infrared evidence.

As for the interior vs. exterior testing debate, they both have their pros and cons.  If you’re buying a newer stucco home in Minnesota, have an invasive moisture test performed.  You’ll need to hire a company that specializes in this, such as one of the companies that I listed at the beginning of this blog.

Oh, and of course, you’ll need to get special permission from the seller to do this.  Drilling holes in walls is invasive; home inspections aren’t.