Should I Cover My Air Conditioner?

Summer is gone, fall is here, and it’s time to get around to all the fall chores – put up your storm windows, turn off the outside sillcocks, cover up the air conditioner… wait, scratch that last one.  Don’t waste your time or money installing a cover on your AC unit.  I’ve already seen people start to cover their air conditioners this year, but there’s no need to. 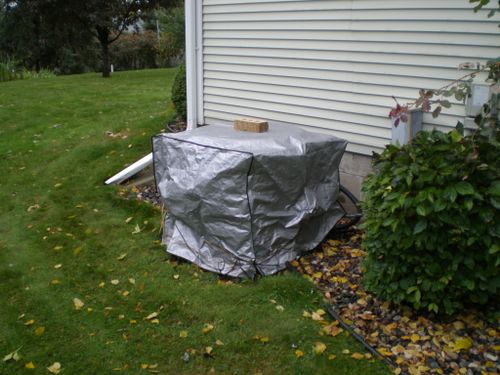 Why do people even install air conditioner covers?  One company that sells covers claims that their AC cover “protects from dirt, hail, snow, ice, nesting animals, moisture, bitter cold, and harsh sunlight.”  Wow, that list makes me not want to go outside.  Let’s review those one at a time.

AC units are designed to be installed outdoors all year ’round.  They are designed to hold up to the elements – they don’t need a cover.  The manufacturers have already taken things like ‘harsh sunlight’ in to account.  If you need proof, just check the web sites of some of the larger manufacturers, such as Rheem and Lennox.  They specifically say their units shouldn’t be covered, because the covers can trap moisture, which can cause damage to the unit.

If you want to keep stuff from falling in to the top of your air conditioner during the fall, just put something on top of it, like a piece of plywood.  While it seems a little laughable, even a makeshift cover like the one pictured below will work just fine, as long as you do something to keep it from blowing off.  This will keep debris from falling in the top of the unit, and it won’t trap moisture.  If you want something that doesn’t look silly, install a very short cover.