Have you ever noticed roofs with shingles popping up all over the place?  A common reason for this is the use of nails that are too short.  When there are popped nails all over the roof, it might be the sign of a defective roof installation; specifically, short nails. 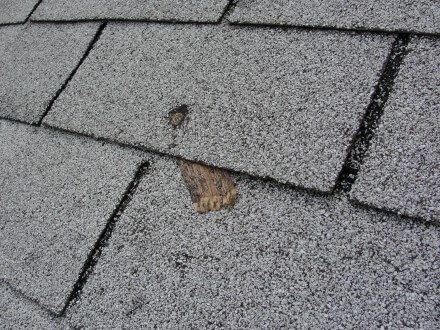 R905.2.5 Fasteners. Fasteners for asphalt shingles shall be
galvanized steel, stainless steel, aluminum or copper roofing
nails, minimum 12 gage [0.105 inch (3 mm)] shank with
a minimum 3/8-inch (10 mm) diameter head, ASTM F 1667,
of a length to penetrate through the roofing materials and a
minimum of 3/4 inch (19 mm) into the roof sheathing. Where
the roof sheathing is less than 3/4 inch (19 mm) thick, the fasteners
shall penetrate through the sheathing. Fasteners shall
comply with ASTM F 1667.

When 1″ nails are used to fasten asphalt shingles to 1/2″ roof sheathing, only the very tip of the nail will penetrate the roof sheathing.  Over time, expansion and contraction of the roof sheathing can force the nail back up and out of the roof.  When this happens, the shingle tabs get lifted up.  On three-tab shingles, these lifted areas are often visible from the ground. 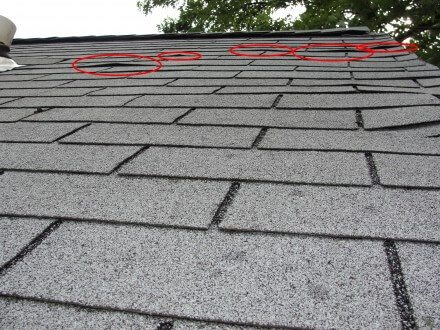 To determine if the wrong nails were used, just pull out one of the popped nails.  When 1″ nails are used, the nails have frequently worked themselves so far out of the sheathing that it doesn’t take much effort to pull the nail right of the roof by hand.  If that doesn’t work, a pliers can usually be used to grab the head and pull the nail out without causing any damage to the shingle below. 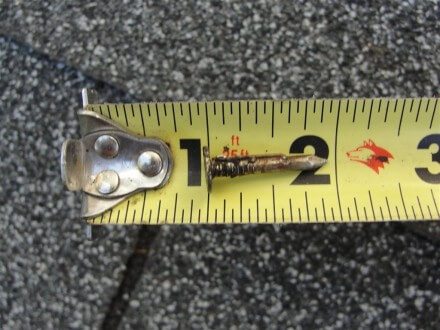 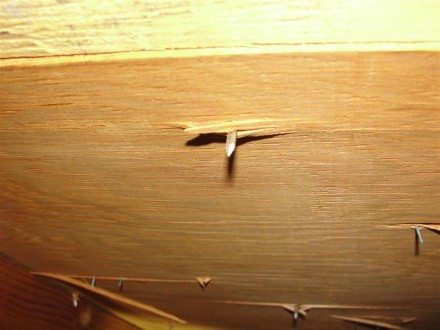 If all you can see is the very tip of the nails and you have 1/2″ sheathing, this is a problem.  Of course, if the roof sheathing consists of 1″ roof boards, it’s acceptable for the nails to not penetrate the sheathing.

When too short of nails have been used at the shingles, it’s a defective roof installation that will be prone to popped nails and shingles coming loose.  According to the roof gods in Minnesota, this is a common installation defect that happens with storm-chasing roof repair companies.  You get a storm-chasing roofing crew that’s used to ‘southern’ rules for roofs, and they install the roof with 1″ shingles, just like they’re used to doing.  The moral of the story is to avoid storm-chasing roof repair companies that go knocking door-to-door.  Hire a reputable local company instead.

Once again, this is one of those defects that you shouldn’t expect the municipal (city) inspector to catch; they usually don’t walk on roofs, and they almost certainly won’t lift shingles to find nailing defects.  If you have an especially savvy inspector, however, they might find a short nail or two laying in the gutter, which might prompt them to start asking more questions.

6 responses to “Short Nails in Shingles”