This is a guest blog post by our very own Peter Schilling.

I’ve lived in my 1923 South Minneapolis bungalow for five years, and up until last week had yet to get my sewer lines cleaned out. Naturally, as a Structure Tech employee (I’m a Client Care Coordinator, so I schedule inspections, thank you very much) I hired Drain Busters, the company we use to conduct sewer line inspections on properties we examine.

Everything went smoothly until Jeff Brewer, the Drain Busters employee, pulled back the cutter blade from the sewer line. Wound around the blade was a gigantic, football-sized mass of what looked like paper, hair and black gunk. Jeff said, “Man, that sure looks like Orangeburg to me!” Then, looking at it closely, he added, quietly, “Boy, I sure hope that’s not Orangeburg.” From the tone of his voice and his wide eyes, I was worried.

Later, I asked Joe Whitters, the owner of Drain Busters, to enlighten us on this mysterious Orangeburg.

“Orangeburg is a pipe material that was used for sewer lines here in Minnesota, from roughly 1965 to 1977,” he said. It’s a very unique kind of pipe, made of layers of wood pulp or sheathing pressed together with layers of tar in-between each wrap, and was also known as fiber conduit or bituminous fiber pipe. A 4-inch diameter pipe would contain anywhere from 20 to 25 layers of pitch pressed wood pulp. “Imagine a paper birch tree,” he explained. “You peel off the layers and spread tar in-between each layer until you get a dense tight packing.” 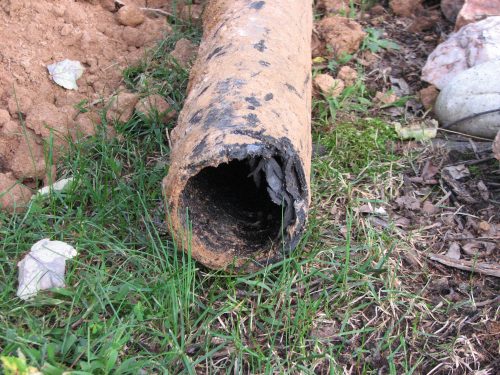 Because iron was in high demand during World War II, Orangeburg was a great replacement. After the war, it was perfect for building those massive tracts of inexpensive bungalows, as it was cheaper and easier to use than metal pipe. Used as early as 1860, this type of pipe was manufactured primarily by the Orangeburg Manufacturing Company, named after the New York town where they’re located.

“We rarely see Orangeburg nowadays,” Joe said. Often, when looking at a pipe with a camera, Orangeburg can be confused with a cast iron pipe, as they look almost identical from inside. “You can tell an iron pipe because of the rust blistering the inside,” he added. As Orangeburg is made of wood and tar, obviously it won’t rust.

Orangeburg pipe was once thought to have been impenetrable to tree roots. “When this pipe was new, that may have been the case,” Joe said. As Orangeburg ages the tar begins to dry out which allows moisture to absorb into the actual walls of the pipe, weakening it, thus allowing tree roots to enter and crush it.

Joe has seen his share of Orangeburg pipe. “Ultimately, it was a failed experiment and since the 80s it’s been discontinued. I still see plenty of Orangeburg, usually in Richfield and North St. Paul.” He’s also seen them in towns like St. Louis Park and Roseville, which have a lot of that post-World War II housing stock.

When Joe’s cameras find Orangeburg, it makes everyone nervous. “I have seen some Orangeburg pipe that looked decent, but I still recommend replacing it every time.” Fortunately for me, a camera inspection revealed that I did have a metal pipe, and the pile of gunk that came out of my sewer was just that—accumulated gunk from a pipe that hadn’t been cleaned in years.

We always recommend having the sewer line examined when we conduct a home inspection, and that you get your lines cleaned regularly when you own the home. In my case, that gunk would have eventually accumulated and backed up raw sewage into my basement, which is not good. If you’re buying a home, a sewer line inspection will help you not only determine if there are roots, cracks or other damage, but if the line is made of an obsolete technology at the end of its life. At best, experts believed Orangeburg pipe would last 50 years, and since in the Twin Cities the last of those pipes were laid about that long ago, every one is at the end of its life. Replacing a sewer line isn’t easy, and it isn’t cheap. Have your sewer line examined, hopefully before you buy your home, but even now if you haven’t. And hope you don’t run into the dreaded Orangeburg.

Thanks to Joe Whitters and Jeff Brewer (both of Drain Busters) for their help. 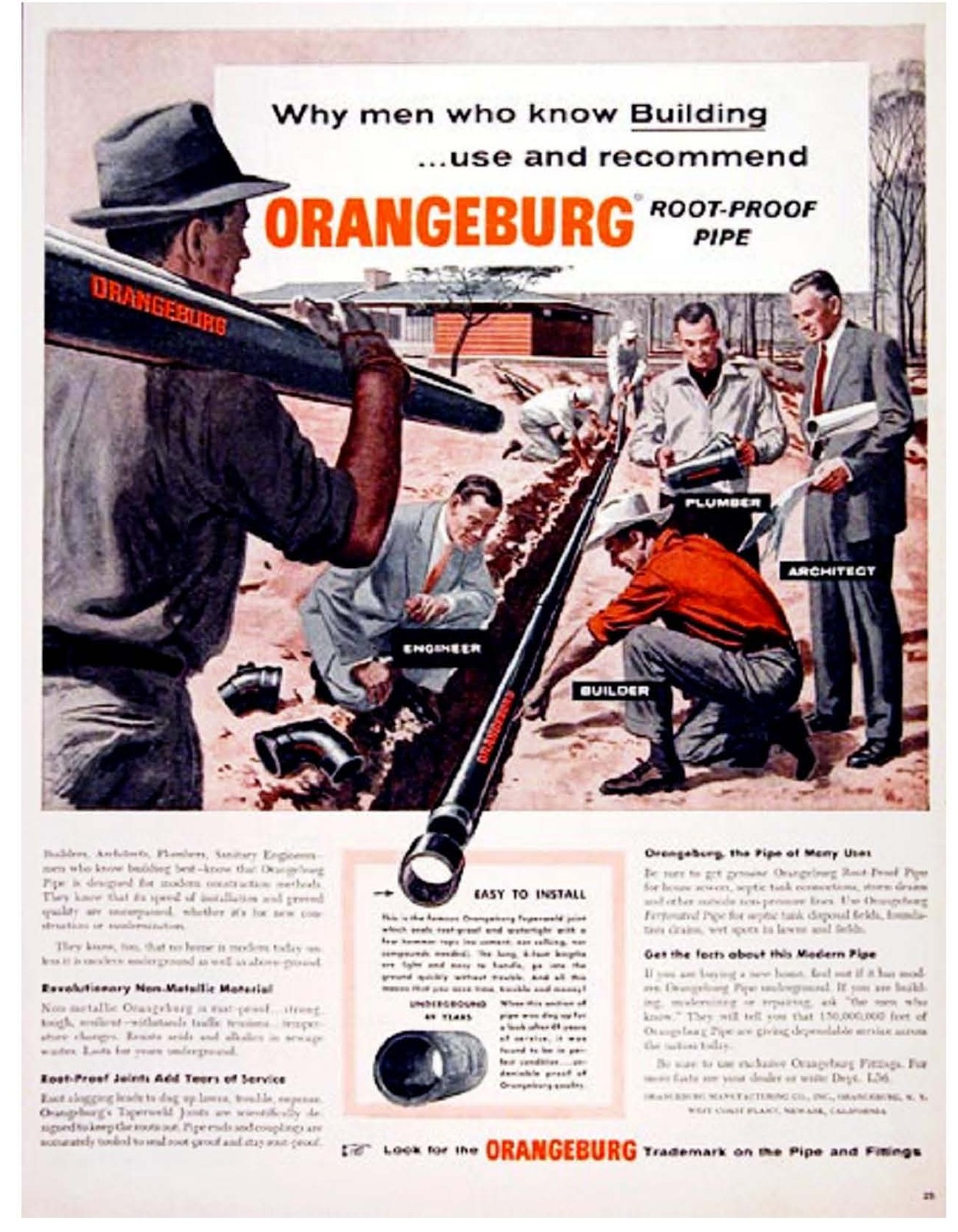