My Beef With One-And-One-Half Story Houses

I’ve lived in a one-and-one-half story house in Minneapolis for the last six years, and I feel like I’ve earned the right to complain about them.  My main beef with them is insulation and ventilation; they’re a pain in the butt and they’re expensive to get right.

There are two primary ways to insulate a one-and-one-half story house: traditionally, or with a hot roof.

Hot roofs are actually pretty simple.  A hot roof will have foam insulation sprayed against the roof decking, and won’t have any ventilation.  If a closed-cell foam is used, it will act as a perfect vapor barrier, and will prevent any air leakage.  Simple.  I’m a big fan of this method, and I even did it at my own house. 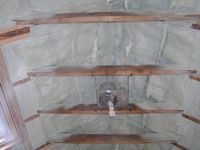 The problem with spray foam is that it’s hideously expensive, and the installers need to have access to the roof boards; that means the attic space needs to be gutted before the work can happen.  If you’re doing a big remodel, great… otherwise, it’s just not practical.  Another way to get access is to tear the roof off, but that’s not too practical either.

The traditional way to insulate and ventilate a one-and-one-half story home is to insulate right up against the first floor ceiling, the knee walls, the vaulted roof sections, and again at the second floor ceiling.  The diagram below illustrates this nicely. 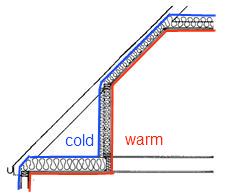 The cold spaces shown above are all supposed to be ventilated.  The ventilation will help to keep these spaces cool during the winter, which helps to reduce the potential for ice dams at the exterior and condensation in the attic.  The illustration below shows one way to do this. 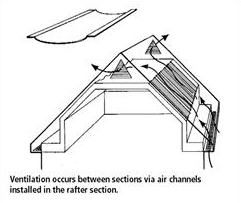 The problem with traditional insulation is that it’s very difficult to retrofit an existing installation.  Some homes have access to all three of the attic spaces, while others don’t have access to any of the attic areas – and there is never access to the vaulted roof sections between these attic spaces.  To get at these areas, it often involves gutting the upper level.  Sure, more insulation can easily be added at the knee wall attic areas, but that’s just a fraction of the total heat loss that’s occurring here.

With traditional insulation, attic bypasses also need to be sealed… and these houses have a ton of them.  Perhaps the largest bypass is the one that occurs right below the knee wall, which is illustrated below.  This area needs to be sealed off to prevent warm air from leaking in to the unheated attic areas. 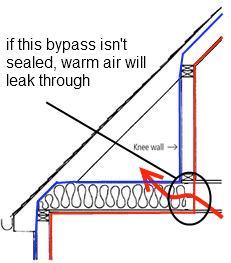 What this all boils down to: if you’re buying a one-and-one-half story home that hasn’t been properly insulated and ventilated, just get used to it.  If you want to fix it, you’ll probably have to gut your upper level, frame out the rafters to make room for more insulation and re-insulate, or tear off the roof and do the same.  If you don’t do this, you’ll get ice dams.  That’s almost a guarantee.  If that’s the case, read my blog post on preventing ice dams from the exterior:

Oh, and another thing… these homes will often have just one supply and one return register from the furnace at the upper level; combine that with poor insulation, and you have a cool space in the winter and a hot space in the summer.

Note: The diagrams in this blog entry came from www.nrcan.gc.ca.  I marked up the diagrams to help illustrate my points.