Vermiculite insulation is way worse than I previously thought. I’ve known that vermiculite insulation can contain asbestos, and my advice to homeowners has always been to assume it contains asbestos and leave it alone, which is also the advice of the EPA. If the insulation needs to be removed or disturbed, my advice has previously been to recommend first having it tested for asbestos. When vermiculite is tested for asbestos and is found to contain less than 1% asbestos, it is considered to NOT be asbestos containing.  The EPA defines asbestos-containing material or “ACM” as having >1% asbestos. The problem is that this can be a misleading diagnosis because it seems to imply that the product is safe.  The photos below show an attic that still had several unopened bags of vermiculite insulation. 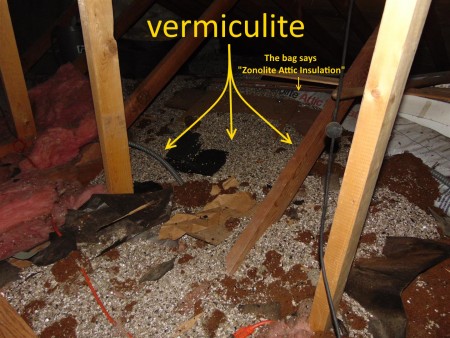 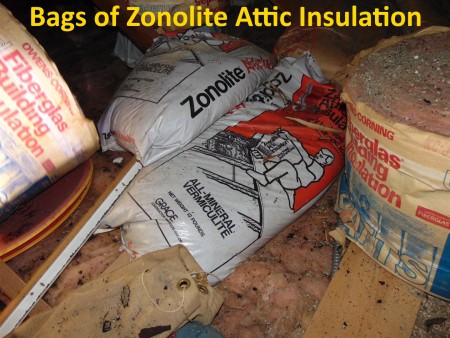 Somewhere between 75% – 85% of all vermiculite insulation sold in the U.S. came from a mine in Libby, Montana, and was sold under the name Zonolite. Nearly all of this insulation contained asbestos which could be easily released into the air. As part of a major class-action lawsuit against WR Grace, numerous studies were conducted. One of these studies determined that exposure to vermiculite attic insulation with less than 1% asbestos is still a potential health hazard when performing typical homeowner activities such as cleaning, maintenance, and remodeling activities. The conclusion of this study was that vermiculite insulation containing less than 1% asbestos should not be considered non-asbestos containing. Reinforcing this conclusion is the fact that the type of asbestos found in Libby vermiculite is “amphibole” asbestos, which is even more hazardous than the chrysotile asbestos that was most widely used in the US. It’s still really bad stuff.

For the record, vermiculite looks like the stuff in the photos above and is often covered by other types of insulation. Also, home inspectors are not required to report on the presence of environmental contaminants, but most home inspectors will still educate their clients about stuff like this when they can. My test for whether or not I tell my clients about stuff is “would I want to know this if I were buying this house?” Of course, the answer is always yes.

When an insulation contractor has to do work in an attic that contains vermiculite, their first step is to have the insulation tested by a lab for asbestos. According to the insulation contractors that I’ve talked to, the vast majority of asbestos tests that take place in the Twin Cities come back “clean”, stating the material contains less than 1% asbestos. At that point, no asbestos abatement contractors get involved, and removal of the vermiculite insulation takes place with what is basically a gigantic vacuum.

Ed Cottingham, Trustee and claims director of the Zonolite Attic Insulation Trust recently visited Minnesota to teach a two-hour class on this topic at an ASHI Heartland chapter meeting. He also taught this class at ASHI’s InspectionWorld conference in January, which can be viewed online for free by any current members of ASHI at ASHI’s Online Learning Center. For non-members, the fee is $29.

If you’re a homeowner with vermiculite insulation in your attic, there’s a good chance that you have Zonolite, which means there is money available to help reimburse you for the costs to remove it and re-insulate. I recommend looking into this. Until then, leave the material alone, even if you had it tested and the test came back “clean”. While teaching here in Minnesota, Mr. Cottingham mentioned that 93% of the vermiculite insulation samples sent in from Minnesota were confirmed as Zonolite products, meaning most vermiculite in Minnesota contains asbestos.

If you’re an insulation contractor, tell your clients about the ZAI trust and explain to your clients that this material is a potential health risk when disturbed.

If you’re a home inspector, tell your clients to leave this material alone, don’t bother testing for asbestos, and tell your clients about the ZAI trust. The ZAI trust will test the vermiculite for you at no cost to determine eligibility for Trust reimbursement. The Trust tests for barium since its presence is unique to Zonolite versus other brands of vermiculite but does not do a more expensive test for asbestos. If you’re an ASHI home inspector, watch the presentation.

Again, visit http://www.zonoliteatticinsulation.com/ for more information about the ZAI trust, which is good until the year 2034.

Note: special thanks to Ed Cottingham for providing information and helping to write this blog post.

7 responses to “New information about asbestos and vermiculite attic insulation”