Kitchen range hoods are for all kitchens, not just above gas ovens

Every home should be equipped with a ducted kitchen range hood. I’ve always known that it’s a good idea to have an exhaust fan in the kitchen when cooking with gas stoves, but gas stoves aren’t the only offender. Any cooking appliance in a home, gas or electric, will introduce pollutants into the air that are bad for you. I recently read a great 31-page white paper on ducted range hoods, and this blog post is the CliffNotes version of that information.

What is a ducted range hood?

A ducted range hood is a one-trick pony; it’s a device dedicated to removing pollutants from the home while cooking. Re-circulating range hoods that blow air back into the home are nearly useless. 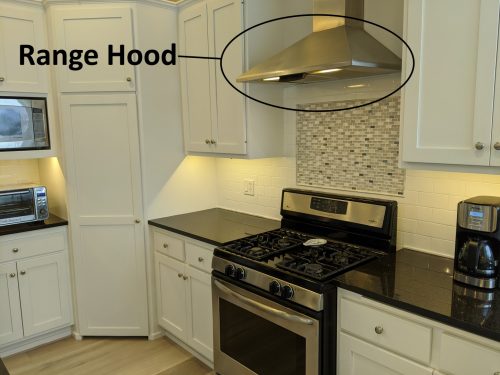 Also, a ducted range hood is not a combination microwave/hood fan that exhausts to the exterior. 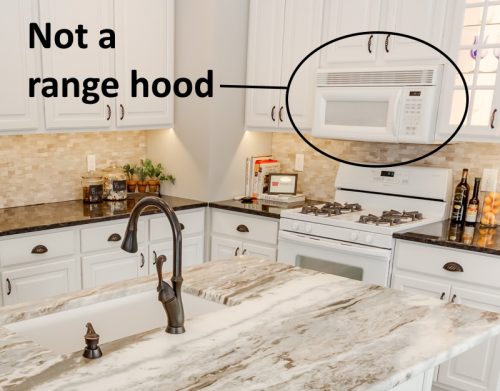 While better than nothing, a combination microwave/hood fan that vents to the exterior is not as effective as a dedicated range hood. Currently, no microwave range hoods comply with ASHRAE Standard 62.2-2016 for airflow or noise. This doesn’t mean they can’t be used… but they’re not the best option.

The louder a range hood, the less likely people are to use it. The quieter the better. Look for a fan with a sone rating of 3 or less while operating at 200 cubic feet per minute (CFM) or higher. This is quiet enough to not drown out a normal conversation.

The job of a range hood is to remove pollutants from the air. The most effective range hoods are the ones that allow the least amount of pollutants to escape into the air. A well-designed range hood will have the following characteristics: 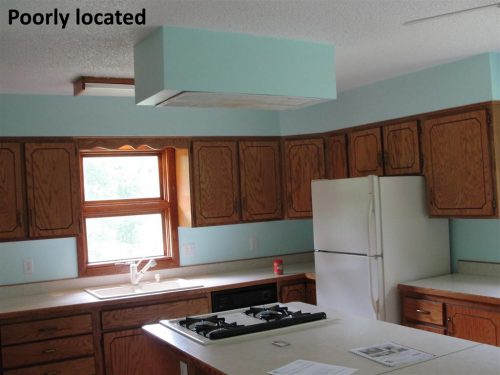 Don’t go crazy with the CFMs

I said bigger is better, but I’m referring to the footprint of the hood, not the size of the fan. With all things being equal, a higher CFM fan will outperform a lower CFM fan, but you don’t want to go nuts. If you use a fan that’s too large, you’ll have an energy penalty to pay. For every cubic foot of air that’s removed from a home, a cubic foot of outdoor air comes back in. This is no big deal when it’s nice outside, but when it’s hot or cold outside, the heating or cooling system in your home will have to work harder when the kitchen fan runs.

Even more importantly, however, is the potential safety issue that an oversized kitchen hood fan can create. When you have a ton of air getting sucked out of the home that has to be replaced, where does the replacement air come from? It should come in through a makeup air duct, which is typically the same thing as a combustion air duct, but not always.

When kitchen hood fans get especially large, the building code may require an oversized make-up air duct with a motorized fan to force makeup air into the home, and some of these systems may have duct heaters as well. As I’m sitting here writing about this, it sounds ludicrous to me, but I’ve seen it done on many homes. It’s just good building science. Check out Makeup Air for Tight Houses for more on that topic. 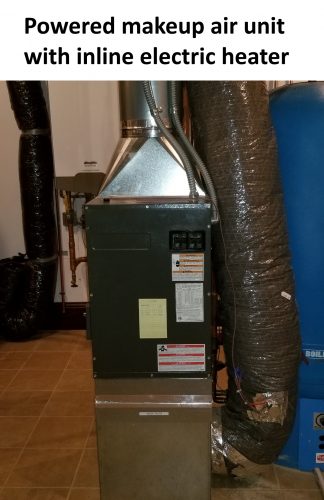 When there isn’t enough makeup air brought into the home, the big bully kitchen fan will steal air from something else in the home. The obvious, feeble choice would be a natural-draft water heater vent, which simply relies on the buoyancy of hot exhaust gases to get the flue gas up and out of the home.

When the kitchen fan wins that battle, you have a serious safety issue in the home. The fix is to make sure the water heater and kitchen fan never have to compete for air. This is done by using an appropriately sized passive duct or powered makeup air in some cases.

How to calculate makeup air

Here in Minnesota, we have a complicated formula to calculate makeup air. I blogged about this back in 2013, and not much has changed since. Check out my blog post on that topic for more info: How to Determine if Makeup Air is Required and the 300 CFM Myth.

For people in other parts of the country that use a less amended version of the national mechanical codes, you can head on over to section M1503.6 of the 2018 code to find this text:

M1503.6 Makeup air required. Where one or more gas, liquid or solid fuel-burning appliance that is neither direct-vent nor uses a mechanical draft venting system is located within a dwelling unit’s air barrier, each exhaust system capable of exhausting in excess of 400 cubic feet per minute (0.19 m3/s) shall be mechanically or passively provided with makeup air at a rate  approximately equal to the exhaust air rate. Such makeup air systems shall be equipped with not fewer than one damper complying with Section M1503.6.2.

Every home should ideally be equipped with a properly installed, properly maintained, ducted range hood. If you don’t have a one it’s not a defect, but it worth considering an upgrade if a kitchen remodel is going to take place. Also, remember to use the range hood when you’re cooking anything, and use the back burners when possible.

2 responses to “Kitchen range hoods are for all kitchens, not just above gas ovens”