I’m not saying they cheated, but this doesn’t look good.

I don’t know how it happened, and I’m not accusing anyone of intentionally doing something that’s completely despicable, but it looks like someone intentionally tampered with a radon test.

I recently inspected a home that was being flipped for some young first-time home buyers.  The home had a newly finished basement, and the young couple planned to use one of the basement bedrooms as their master bedroom, so they hired me to do a radon test at the same time.  For the record, radon causes lung cancer.

The radon test was high, so the buyers asked the home flipper to install a radon mitigation  system.  Here’s where it starts to get interesting.

The buyer’s agent, who is a great guy that I know and trust, warned the young buyers that this was highly unusual. The buyers really wanted the house, so they agreed to have a second test performed.  They said the test had to be done by me, and the results would be averaged with the first test.  If the average was still high, the seller would need to install a mitigation system.  Here’s the unbelievable part: the seller crossed off that part of the purchase agreement addendum and wrote “we’ll see when the results come back.”

Um… gee… that doesn’t sound suspicious or anything.  The buyers went along with it.

So we set another test…

I received the call to do a second radon test on a Wednesday afternoon.  The buyer’s agent said we had permission to set the test any time.  I told him we’d try to get it set on Thursday morning, but  someone from my company was able to set the radon test later that same evening.  In other words, we set the test earlier than planned. 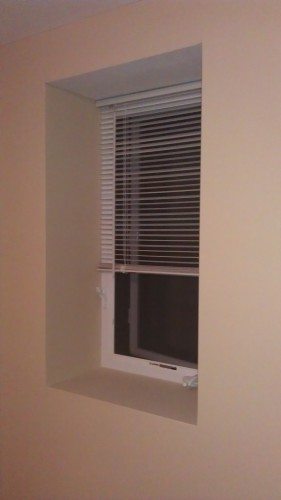 When I picked up the radon test at 6 pm on Friday, the bedroom window was open.  The window wasn’t open when we set the test.  It was below freezing outside, the house was vacant, and the temperature was supposed to drop down to the teens that night.

So why was the window open?

I took a photo of the open window and immediately notified the buyer and their agent that the test was invalid.  I ran the test anyway, just because I was curious about the results.  The radon levels were almost identical to the first test we did, up until the last four hours, when the levels plummeted.  I have no doubt in my mind that that’s when the window was opened; there is no other reasonable explanation for the sudden drop in radon levels.  The graph below shows the hour-by-hour breakdown.

Did someone open the window on purpose, with the idea of coming back early the next day to close the window?  I don’t know.  I’m a trusting person who gives people the benefit of the doubt, but I’m having a hard time even entertaining the idea that this was an accident.

What do you think?  What would you do if you were the buyer?