Tired of refilling your hand soap dispenser? Do this.

One of my least favorite chores in the kitchen has always been re-filling the built-in hand soap dispenser at my kitchen sink. Through years of extensive research into this matter, I’ve discovered that I’m not alone. Approximately 57.3% of soap dispensers in the Twin Cities metro area remain unfilled. Sitting next to the empty soap dispensers, I often find unsightly store-bought bottles of hand soap. Oh, the humanity.

I have many reasons to not refill my soap dispenser.

For one, they’re difficult to access. Mine is so tough to get at that I need to lay on my back under the kitchen sink just to unscrew it.

They’re difficult to fill. Why are the openings so small?! The photo below shows what used to happen to me every time I would try to fill my dispenser. I’ve tried a funnel, but this doesn’t work either – the soap is too thick.

Another problem is getting the dispenser screwed back in place under the counter – it’s very difficult to see under there. I actually installed a fluorescent light inside my kitchen cabinet to help with this chore.

Finally, this is a grueling task that demands action about once a month… and with the whole COVID-19 and handwashing thing, we’re really going through the soap. If I only had to do it once a year, that would be fine, but we wash our hands in the kitchen more than anywhere else in the house, and the tiny container doesn’t hold much soap.

While inspecting a home in Minneapolis about ten years ago, I came across an unusual container for the hand soap dispenser while looking under the kitchen sink. Instead of having a tiny 8 oz container screwed to the dispenser, there was a long tube dropping down into a huge jug of hand soap. 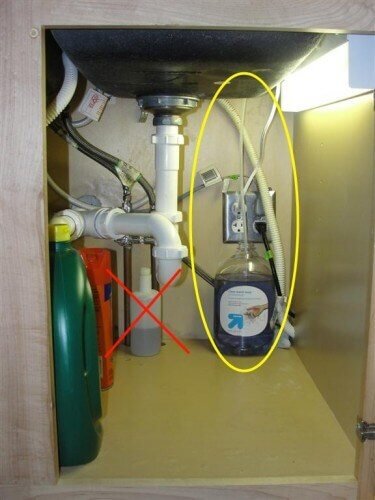 For a split-second, I figured the owner had broken their soap container, but I quickly realized that this was no accident, my friends. This was a stroke of genius.

No more refilling the soap container.

No more running out of soap every month.

No more back-breaking acrobatics while reaching under the sink trying to unscrew the soap container.

No more tears of anguish and frustration trying to pour liquid hand soap into a 3/8″ hole.

You too can do this. Just pick up three feet of 1/4″ plastic tubing, cut it to length, and replace the little plastic tube coming out of your soap dispenser with this long tube. Now drop it into a huge container of hand soap. That’s it, that’s all. The Home Depot by my house sells a twenty-five-foot roll of this plastic tubing for under three dollars. Many hardware stores sell this stuff by the foot, and you can even cut it to length with a pair of scissors.

Now sit back and marvel at your tricked-out hand soap dispenser, and decide what to do with all of your extra time.

p.s. – to anyone who says they just pull the pump out of the sink and pour their soap in the hole and it works great… I don’t want to hear about it. Let me have this. Also, I first blogged about this over a decade ago, and soap dispenser manufacturers have since caught on. The soap dispenser that came with my new kitchen faucet actually included a three-foot section of clear plastic tubing. Awesome.

3 responses to “Tired of refilling your hand soap dispenser? Do this.”