For this this week and next week’s blogs, I’ll be waxing on GFCI outlets.  I’ll talk about what they do, why they’re so important, what you need to know about them, and how to test the outlets in your own home. 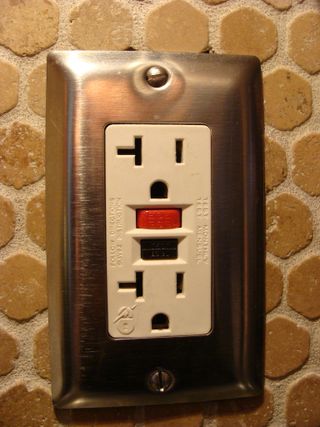 First, a quick refresher. In my blog about reversed polarity outlets, I explained that there are two wires that conduct current – one gets connected to the earth (grounded) and the other doesn’t.  The grounded conductor should always be white, and is referred to as the “neutral” wire.  The ungrounded conductor is usually referred to as the “hot” wire, and it can be any color besides white or green, but it’s typically black.  Because the neutral wire is connected to the earth, any time you’re in contact with the earth and you touch an ungrounded wire, you’ll complete the circuit and you’ll get a shock.  The general, technical name for this event is a ”ground fault”, because current is getting back to the ground in a way that it shouldn’t (it’s using you).

Not all shocks are the same. Here’s where we’ll get in to a little more detail about what happens when a human comes in contact with an ungrounded (hot) conductor.

To prevent lethal shocks through ground faults, special electrical devices called Ground Fault Circuit Interrupters, or GFCIs, are required in homes.  If a GFCI device detects a ground fault, it will shut off, or “interrupt” (see what I did there?) current within a fraction of a second.  It won’t be fast enough to prevent a painful shock, but it’s enough to keep you from getting killed.

GFCI devices were first required near swimming pools in 1971.  Today they’re required in areas where lethal shocks are most likely to happen – typically at areas that are wet and have good contact with the earth.  These areas include the exterior, garages, kitchen counter tops, bathrooms, unfinished basements, crawl spaces, and outlets within 6′ of laundry sinks, utility sinks, and wet bar sinks, among other places.  For an excellent one-page chart that lists all the locations and shows when the specific requirements went in to effect, click here.

That’s enough information on GFCIs for this week.  Next week I’ll talk about the different types of GFCI devices available, the difference between new and old GFCI outlets, how to test them, how they irritate me, and how to save money while installing them.