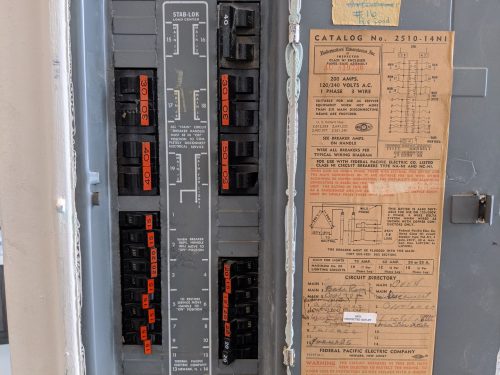 I recommend the proactive replacement of FPE Stab-Lok panels, whether the panel has previously caused a house to start on fire or not. Here’s why:

So why don’t we recommend having an electrician evaluate the panel?  There’s no point. There is nothing that an electrician can do or say to make an FPE Stab-Lok panel safe. Some electricians are under the impression that FPE panels are safe if they can turn every breaker on and off, if every breaker is tightly attached, and if there is no evidence of overheating or scorching in the panel. These things would be dead giveaways that there is a problem, but to truly know if the breaker would trip when it needs to, each breaker would need to actually be tested. This testing would be more expensive than having the entire panel replaced.

What does it cost to replace a panel? Replacing an old, unsafe electrical panel is not a huge investment. In most cases, the total cost for this project is less than $1,500. Not only does this eliminate the hazards associated with this panel, but all newer panels have the option to have Arc-Fault Circuit Interrupters (AFCIs) installed, for added fire safety. AFCI devices are not available for older Stab-Lok panels.

What about condo buildings? We have a ton of condo buildings throughout the Twin Cities where every unit was constructed with an FPE Stab-Lok panel. Should you be worried about buying a condo in one of these buildings? I don’t think there’s any cause for concern. My advice is to have the panel replaced in your own unit, and consider bringing up the issue to the association. I’ve heard of associations here in the Twin Cities where FPE panels have been replaced in every unit of the building for a significantly reduced rate.

The bottom line is that hazards associated with FPE panels are a known issue throughout the electrical, insurance, and home inspection communities. To read more about FPE Stab-Lok panels, check these links:

For more information about Federal Pacific Electric panels, check out any of the news clips below: