One of the main jobs of gutters is to direct water away from the building, which helps to prevent wet basements and foundation problems.  When downspouts drain right next to the building, water gets concentrated to one location, which is usually worse than no gutters at all.  I’ve said it before and I’ll say it again: downspout extensions are important.

The photo below shows a nice example of a house with long downspout extensions carrying water a good distance away from the house.

While the setup above is great for the house, some people prefer not to have the downspout extensions so visible.  Dealing with the walkway can also be an issue; the easy options are to create a trip hazard by running the downspout across the walkway, or a slip hazard by stopping the downspout short of the walkway, which will make for an icy mess in the winter.  A better solution is to have the downspouts discharge into yard drains, which most commonly consist of black corrugated 4″ tubing, shown at right. This tubing gets buried in the yard and eventually terminates at a lower point, allowing water to drain away from the building.

This is the same stuff that I mentioned in a recent blog post while discussing sump pumps discharging to a yard drain.  Just like the discharge tubing from a sump pump, connecting a downspout directly into an underground drain can allow for ice to back up.  Don’t do this. 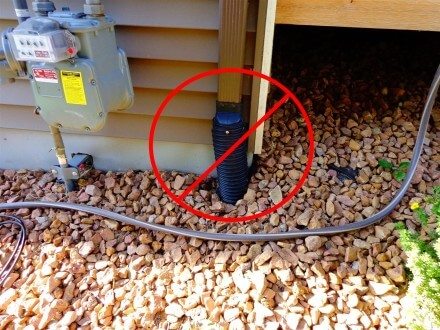 While a blocked sump pump discharge can lead to a wet basement, so can blocked downspouts.  The home pictured below had a downspout discharging directly into an underground yard drain that filled with ice, and ended up leaking a lot of water in to the basement during the course of my inspection. 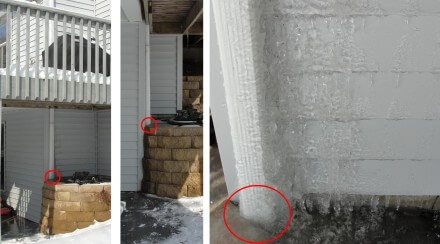 The infrared image of the same corner in the basement shows how wet the wall was during the inspection, all as a result of ice backing up and finding it’s way into the house.

This water intrusion could have been avoided by having the downspout discharging to a drain receptor instead. While this may appear to be a direct connection, the downspout shown below ends approximately 1″ above the top of the drain receptor. From there, a yard drain takes the water to a lower point in the yard. 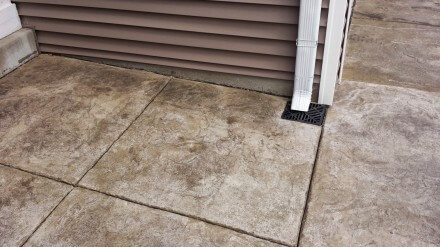 It obviously takes some planning to get a system set up like this, but this is a great way of managing water from downspouts, and it’s especially easy to do with new construction before the walkways are poured.