Don’t do any of this work if you’re not qualified – you could start a fire or get electrocuted.  This is not a comprehensive how-to guide; this is only an overview.

The third prong on an outlet is commonly referred to as ‘the ground’, and it provides an alternate path for electricity that may stray from an appliance or product.  This is an important safety feature that has been required since about 1962.  This minimizes the risk of electric shock, and allows surge protectors to protect your electrical equipment, such as televisions, computers, stereos, and other devices.

The best way to upgrade a two-prong outlet is to install a three-prong outlet that has a continuous electrical path back to the panel.  If the outlet is installed in a metal box, and that metal box has metal conduit all the way back to the panel, this will probably be easy to do.  To test this, you can use an inexpensive pig-tail electrical tester, which is available at any hardware store for about two to three dollars.  With the circuit energized, touch one end of the tester to the hot wire, which should go to the smaller slot on the outlet, and one end of the tester to the electrical box  (see photo below left).  If the tester lights up, the box is grounded.  Now all you need to do is attach a bare copper wire to the box, and use this as the ground wire for a three prong outlet (see photo below right). 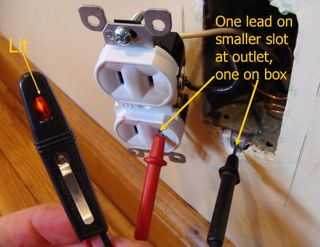 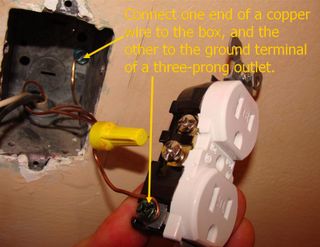 If you perform the test with a pig-tail tester and the light doesn’t light up when you touch the hot wire to the box, the box is not grounded (or you’re not touching a hot wire).  In this case, you could run a ground wire back to the panel, or you could replace your two-prong outlet with a GFCI outlet.  A GFCI outlet provides protection against electrocution, but without a ground wire, this outlet won’t provide any protection for your electrical equipment.  A surge protector plugged in to an ungrounded outlet will do nothing, and you could fry your new plasma TV. 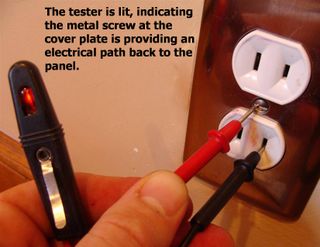 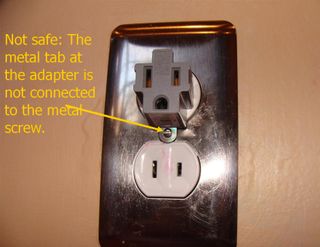 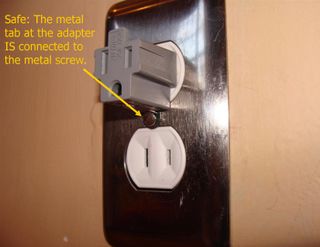 If this is the case, you can safely use a two-prong to three-prong adapter, as long as you secure it to the outlet with the cover plate screw.  Any other use of a two-prong adapter is unsafe.

No responses to “Converting Two-Prong Outlets”