Can I glue ABS to PVC?

It’s possible to join ABS to PVC, but it’s only supposed to be done with a mechanical coupling, not glued. If you just came here for the answer, you can stop reading… but I think you want the whole story. Here goes.

Today, there are two commonly used plastics for drain, waste, and vent pipes inside of homes; ABS (black) and PVC (white, mostly). This is almost all that’s ever used in new residential construction here in Minnesota, and I suspect for the rest of the country as well. For most systems, a plumber will use one material or the other, not but both. This makes all of the connections simple; the plumber uses a solvent cement (aka glue) made just for that material, things stick together, and everyone is happy…

Until then the “handy” homeowner comes along and messes it up. 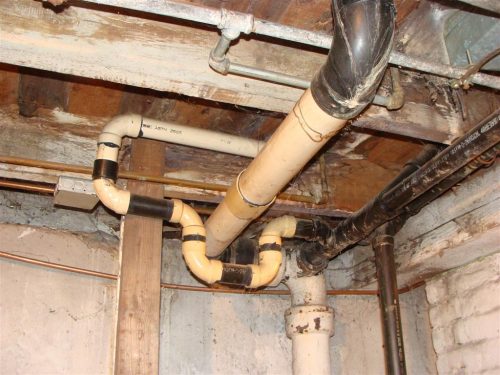 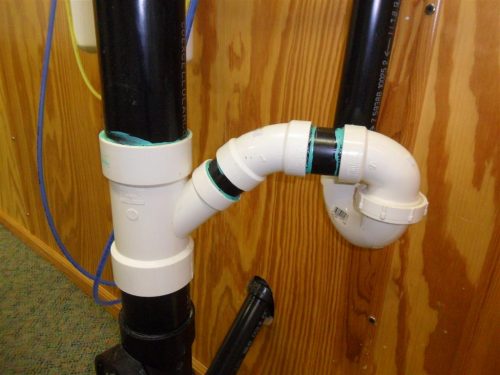 For the most part, ABS and PVC are not supposed to be glued together. We’ll turn to the 2020 Minnesota State Plumbing Code for some background on this topic.

ABS to PVC: What the MN plumbing code says

If we turn to chapter 7 of the MN state plumbing code, we can find a bunch of info on drains. Section 705.1.2 ABS Solvent Cement Joints (for ABS) says the following, among other stuff:

Where surfaces to be joined are cleaned and free of dirt, moisture, oil, and other foreign material, the solvent cement that complies with ASTM D 2235 shall be applied to all joint surfaces.

So that says you can glue ABS using something that meets ASTM D 2235. That’s the standard for solvent cement for ABS.

Section 705.6.2 Solvent Cement Joints (for PVC) says the following, among other stuff:

Where surfaces to be joined are cleaned and free of dirt, moisture, oil, and other foreign material, apply primer purple in color that complies with ASTM F656. – and – Solvent cement that comply(sic) with ASTM D 2564 shall be applied to all joint surfaces.

So as long as you use the right purple primer, you can also glue PVC. You need to use glue that meets ASTM D 2564, the standard for solvent cement for PVC. Of course.

So how can these two materials be connected together? We need to turn to section 705.10.3 Plastic Pipe to Other Materials:

That means that if ABS and PVC are connected together, some type of adapter or fitting needs to be used. That’s it, that’s all that’s allowed. The image below shows one such adapter on the right side. This has a stainless steel band going through the middle for rigidity. The coupling on the left lacks a metal band in the middle and also lacks UPC approval. 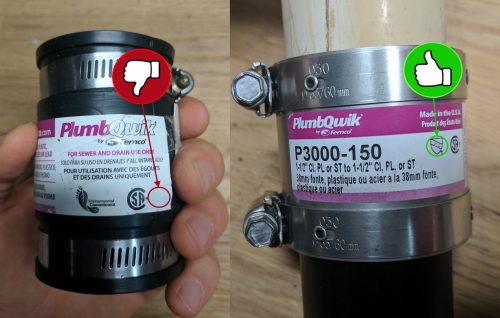 What about ABS to PVC Cement?

If you stop by any home improvement store, you’ll be able to find a green cement that will connect ABS to PVC, and it might even have an IAPMO approval stamp on it (UPC), so what could the problem be? I mean, it’s approved, right? 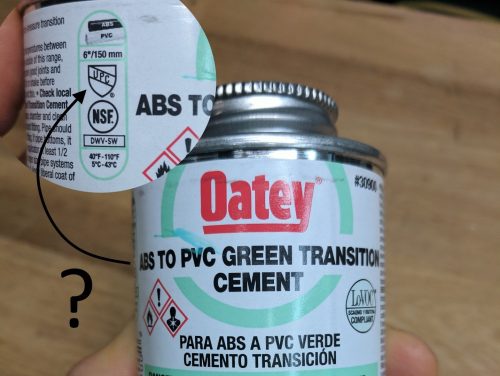 The problem is in the standard. If you look up the technical specifications for the product, you’ll find that it meets ASTM Standard D 3138. You’ll find the following information on the ASTM website https://www.astm.org/DATABASE.CART/HISTORICAL/D3138-04.htm. I added the bold.

1.2 These cements are intended for use in cementing transition joints between ABS and PVC materials in non-pressure applications only (25 psi (170 kPa) or less). Note 1 This specification was developed to provide a means for joining an ABS non-pressure piping system using a solvent-cemented transition joint, for example, joining ABS building drain to a PVC sewer system. The intention was not to create a specification for an all purpose ABS-PVC solvent cement that would be used for mixing of ABS and PVC piping materials nor to specify a cement that could generally be used for either material. Specific cements for ABS or PVC components should be used (see ).

That spells it out pretty clearly, yes? ABS to PVC cement is only meant to connect an ABS system to a PVC system. An example of this would be an ABS drain system inside of a home connecting to a PVC drain system just outside the building, or vice-versa. That’s the only place that this cement is supposed to be used.

What if ABS and PVC have already been cemented together?

I say meh. No big deal if this is done. It’s technically not right, but that’s all. I have yet to find a single failure at this connection point. I’ve talked to a handful of experienced plumbers about this, and not one of them has seen this connection fail either. I typically point it out as an improper installation, but I leave it at that. I don’t tell people to rip it apart and put it back together. Why would I? 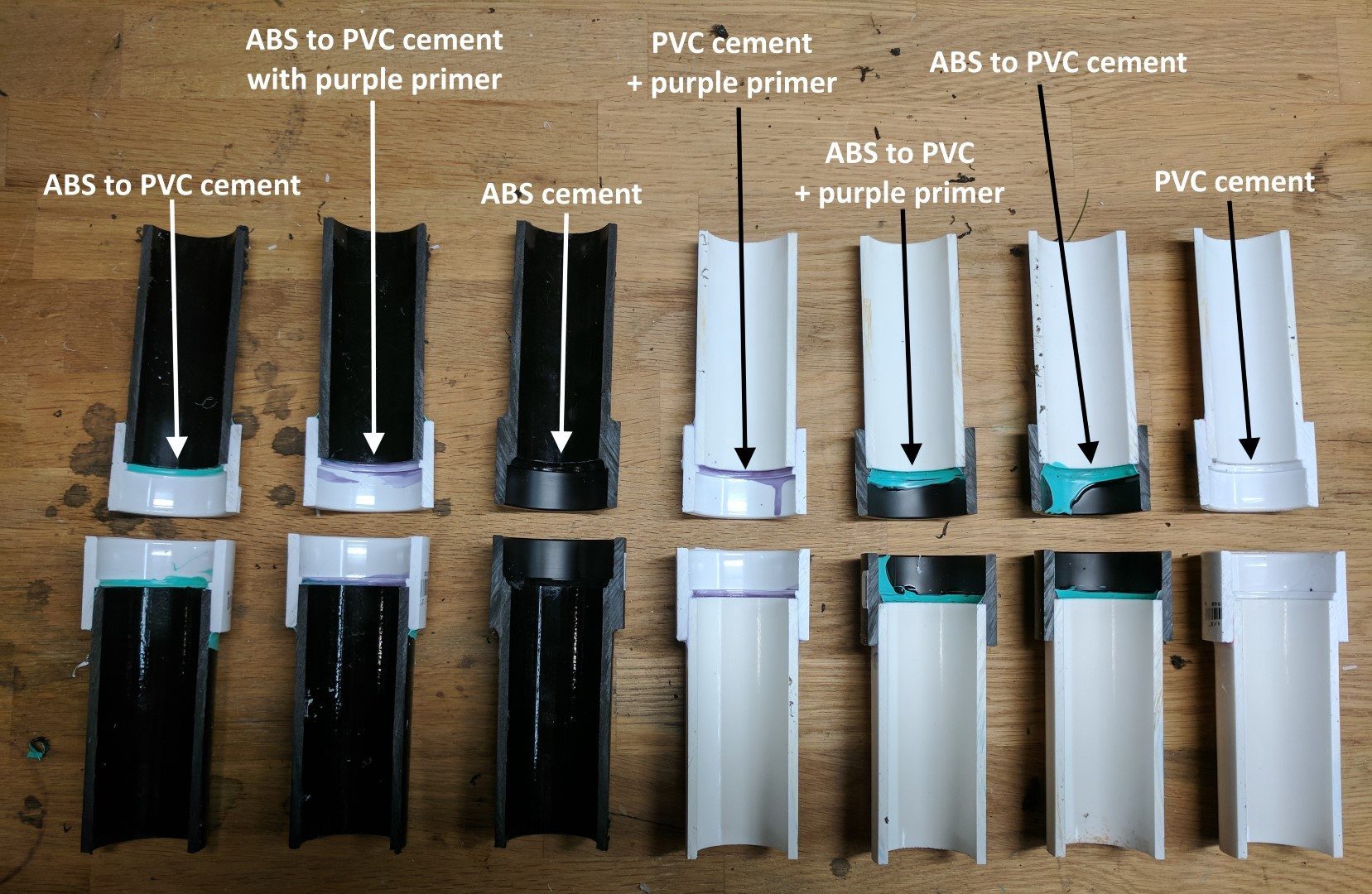 Next, I cut each section in half lengthwise and put the coupling in a vice to get the materials to separate. 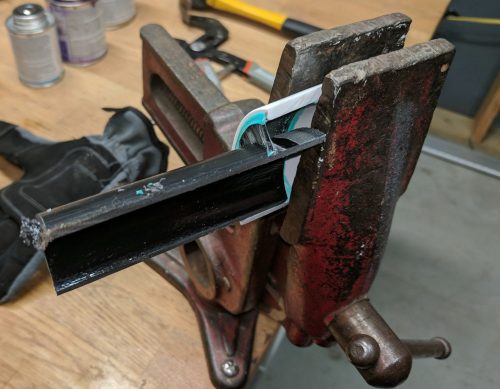 I got most of the connections to separate, but not all of them.

Again, an ABS to PVC glued connection isn’t technically correct, but this connection is highly unlikely to fail. I think failure is close to impossible; if I hadn’t used a vice, there’s no way I could have separated the two. There’s no need to lose sleep over connections like this.