There’s No Perfect Temperature For Your Water Heater

What’s the best temperature for your water heater?  There’s no single great answer.  The American Society of Sanitary Engineering Scald Awareness Task Group recently released a white paper on this topic, which essentially says that there is no perfect temperature to set your water heater to.

What’s a safe temperature for water?

On the side of most water heaters, you’ll find a warning that says water temperatures of 125 degrees Fahrenheit can cause burns or death.  To be safe, the water coming out of the plumbing fixtures in a home shouldn’t be any hotter than 120 degrees.   The handy photo below (courtesy of Charles Buell)  shows how fast second- and third-degree burns can happen at temperatures that any new water heater is capable of producing. 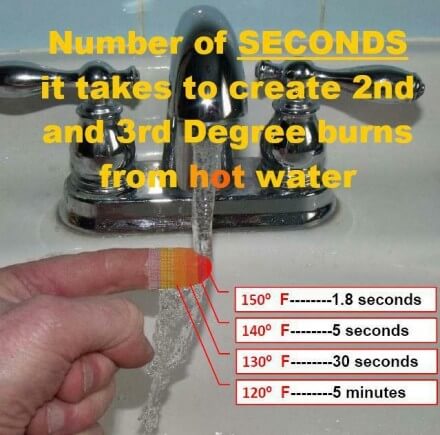 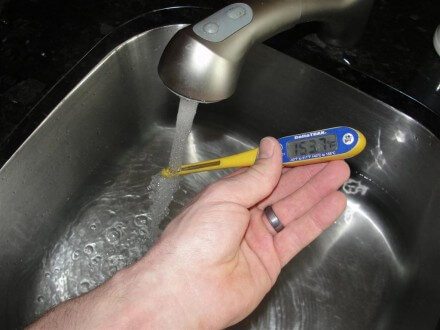 The water only stayed at this temperature for a few seconds; it quickly dropped back down to about 135.  While there was a tempering valve installed to mix cold water in with the hot water right at the water heater outlet, it wasn’t enough to completely control the water temperature at the fixtures.

Minnesota has no requirements for residential water temperatures.  Anti-scald devices are required in all new or remodeled showers or shower-bath combos in Minnesota (4715.1380 Subp. 5), but this does nothing to address the final temperature of the water coming out of a fixture.   Anti-scald devices only help to prevent people from getting scalded by a sudden swing in temperature while taking a shower.  With old shower valves that didn’t have the anti-scald feature, if a toilet would flush while someone was taking a shower the pressure on the cold water line would drop, quickly increasing the water temperature at the shower.

It seems as though the solution to help prevent accidental scalding would be to turn down the temperature at the water heater to say, 115 degrees, but lower temperatures actually create other problems.

At temperatures below 135 to 140, Legionellae bacteria, which is responsible for Legionnaires’ Disease, can survive and even multiply in the water heater tank.  Estimates by LegionellaPrevention.org say that up to 600,000 cases of Legionnaires’ Disease are misdiagnosed as pneumonia each year because this is something that isn’t tested for in hospitals.   The diagram below shows the time it takes to kill Legionellae Bacteria at different temperatures.

To help prevent bacteria growth, the ASSE recommends keeping the water in your water heater tank at about 135 – 140 degrees Fahrenheit. 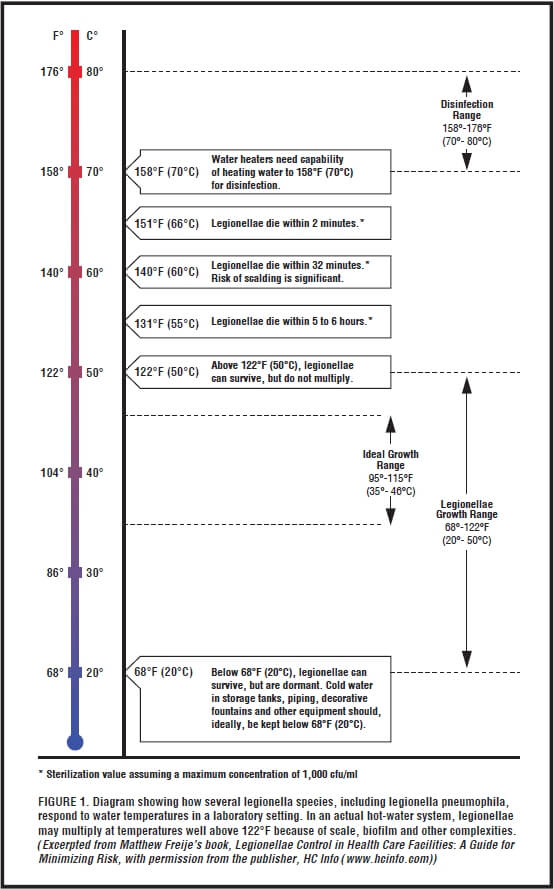 Of course, this creates a scalding hazard.

So What’s the Answer?

To help prevent bacteria growth and to lower the risk of scalding, have a plumber install a tempering valve and crank up the temperature at your water heater to about 135 – 140, as ASSE recommends.  Last year I wrote about how I installed a tempering valve on the hot water outlet at my own house in order to get more water out of my water heater.  These valves would be a good thing to install in every home.  A tempering valve allows you to keep the water at a dangerously high, Legionellae-killing-temperature inside the water heater tank, yet it mixes cold water in with the hot water right at the outlet, making it so you don’t get this hot water at the rest of the fixtures in your home. 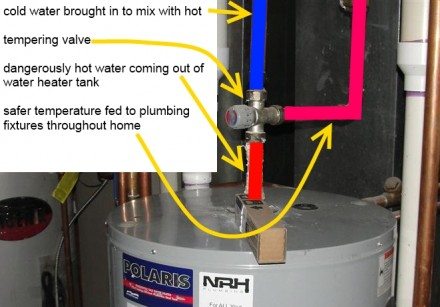 As I mentioned in my story about the recent inspection with dangerously hot water, a tempering valve won’t guarantee safe water temperatures, but it will get you a lot closer.