It’s estimated that one out of three homes in Minnesota has elevated levels of radon gas.  Because of these high numbers, the Minnesota State Building Code has adopted Apendix F of the International Residential Code, Radon Control Methods.  This means that all new homes in Minnesota must now be built with a passive radon control system.  A passive radon control system is similar to a standard radon mitigation system, but there are a few key differences.

A standard radon mitigation system consists of a 3″ plastic vent pipe that starts under the slab in a basement and ends above the roof, much like a plumbing vent.  A fan is connected to this pipe, usually in the attic, so the air and gases under the slab are constantly pulled out, creating a negative pressure zone in the area under the basement slab.  This prevents most radon from entering in to the home.  If drain tile is present, the pipe can be tied in to the drain tile, as this creates a perfect way to suck air soil gases from under the entire slab.  Gaps in the slab are also sealed to help prevent radon entry. 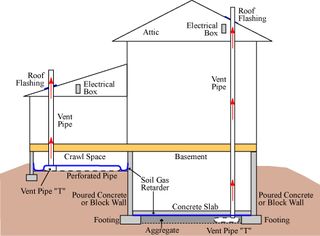 A passive radon control system consists of the same 3″ plastic pipe, but without a fan.  An electrical junction box will need to be wired in to the attic near the pipe so a fan can be easily added later, if needed. A  layer of 4″ aggregate, sand, or soil gas collection mats must be installed under the basement slab, and 6 mil polyethelene laid over the aggregate before the basement slab is poured.  This allows soil gases to be properly pulled from everywhere under the slab, and keeps soils gas from entering in to the home if the basement slab cracks.  Any openings in the basement floor must also be sealed, such as sump baskets and bathtub drains.

There are many benefits to building a home with a passive radon control system.  The most obvious is that it reduces the risk of lung cancer.   Passive systems don’t require the use of a fan, so there is no electricity being constantly consumed – it’s a ‘green’ thing.   These systems are also much more cosmetically appealing, as most of the components will be concealed in finished spaces.

For more information on passive radon control systems in Minnesota, visit the Minnesota Department of Health.