LED light bulbs have been around for many years, but they’ve been too expensive for me to justify buying.  While I know they make a lot more economical sense than a Prius, I’ve been holding off for the prices to drop down a little further.  I finally decided to buy a few last week.

I use the recessed lights in my kitchen more than any of the other lights in my house, so those are the ones that made the most sense to replace.  I have 65 watt flood lights, and I probably have them on for about four hours every day – more during the winter, less during the summer.  To figure out my annual cost to operate each bulb, I’ll assume I pay $0.08 / kWh.  The equation is 4 hours * 365 days * .065 kW * $0.08 = annual cost.  This makes my annual cost to operate each bulb $7.59. 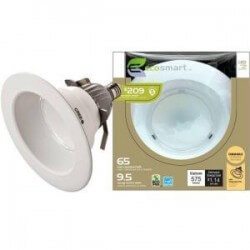 Two or three weeks ago, Home Depot had a special buy on the 65-watt equivalent LED lights, bringing the price of a 9.5 watt LED floodlight down to $24.97.  My annual cost to operate one of these bulbs would be $1.11, making my annual savings $6.48 per bulb, bringing the ‘payback’ period to a little less than four years.  To really sweeten the deal though, these bulbs are designed to be installed without a trim kit.  If you have decent trim kits on your recessed lights, this will mean nothing to you… but I have super-ugly yellow (ok – ‘ivory’) trim kits on the recessed lights in my kitchen, and I’ve actually contemplated spray-painting them white or buying new ones, but now I don’t have to.

The photo below shows the four new LED light bulbs on the left, and two older incandescent bulbs with ugly yellow trim kits on the right.  Those will be replaced very soon. 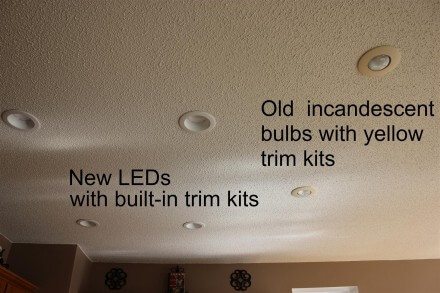 A common complaint that people have with LEDs is that the color looks blue-ish or cold, but not so with these bulbs.  These looks just like the other bulbs in my kitchen – in fact, I think they look even better.  I wouldn’t even know these were LED bulbs if I hadn’t been the one to put them in.  The light output is 575 lumens, which is average for a 65-watt incandescent bulb. 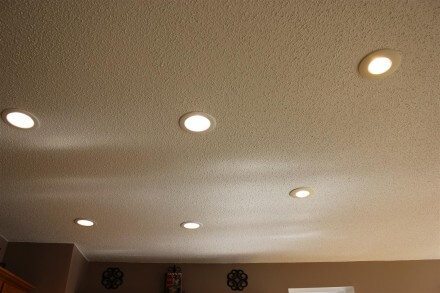 Another complaint that people have with LEDs is that they don’t dim properly, or they won’t dim low enough; not so with these bulbs.  To properly dim an LED bulb, the bulb itself needs to be dimmable and an LED dimmer switch needs to be used.  After installing an LED dimmer switch, I was able to get these LED bulbs to dim about as low as my incandescent bulbs.  I had to wait until night-time to take a photo of this, but I think you’ll agree – the light output at the lowest level is quite similar to the incandescent bulbs.  The one interesting thing is that at the full dim level, these lights seem to change color – they look a little green-ish. 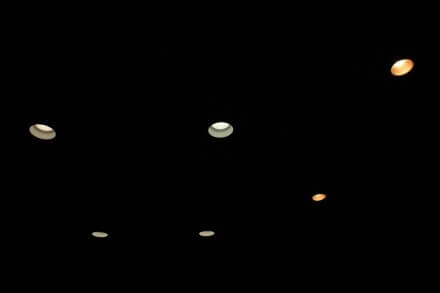 If you try using a standard incandescent dimmer switch with LED bulbs, it probably won’t work properly.  The video below, taken by Milind, shows a good example of what happens when the wrong dimmer is used.  This video shows CFL light bulbs, but CFL and LED dimmer switches are the same thing.

If you’re not interested in replacing the existing trim kits on your recessed lights, you can buy standard LED bulbs without a trim kit.  Costco sells a 65-watt equivalent for about $15, and it looks almost identical to a standard incandescent bulb.  I picked up one of these for a recessed light in my bathroom, and it seems to give off the same color as the old incandescent bulb, but it’s actually quite a bit brighter.  While the packaging called this a 65-watt equivalent, it actually puts out 750 lumens and consumes 13 watts.  Given the comparison to the bulbs from Home Depot, this seems more light an 85-watt equivalent.  Either way, I like it.  I’m happy.

LED bulbs are cooler… and they generate less heat.

Besides all of the energy saving features, LED light bulbs are great for recessed lights when you have an attic space above, because they generate far less heat, which means less heat gets transferred to your attic space during the winter, which can help to prevent ice dams.  You can read more about that here – Recessed Lights are Evil.